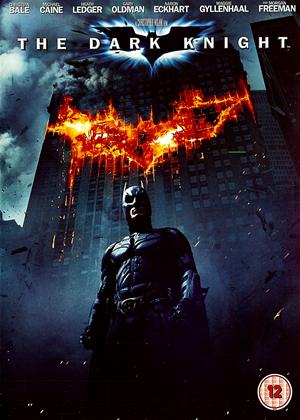 Reviews (11) of The Dark Knight

Brilliant Movie - Action packed and tense - not to be missed! - The Dark Knight review by CP Customer

A lot of people commented that they are put off this film with the fact that it is so long. However, the film is too good to realise that it was so long!

Christian Bale plays batman excellently again - and is along the same theme as Batman Begins (a little "darker" than previous batman films).

The late Heath Ledger played the Joker brilliantly and really presented his acting talents. Again, comparing the original Tim Burton's Batman - Heath Ledgers batman is a little darker (and crazier) than previously played by Jack Nicholson - which was more comedy and tongue-in-cheek humour. At certain points of the film I even questioned whether it should have been a higher certification than "12A"

In the film, the new District Attorney, Harvey Dent - is Batman's key to regaining a normal life. Harvey is a great guy who has the power and attitude to clean up Gotham (usually left up to Batman) - however things don't go to plan with the Joker and corrupt cops around and things aren't that simple when Harvey Dent's girlfriend just happens to be Rachel - Bruce Wayne's childhood sweetheart and all-time love (as shown in Batman Begins)

I liked every aspect of this film – action, tension, special effects, impressive acting…and more! I was glad I saw it on the big screen - please watch you will not be disappointed (Although my Husband was a little annoyed that the storyline did not tie in with the "old" batman films!! Lol)

If you liked Batman Begins - you will love this!

I went along to this expecting a somewhat harder storyline, but was astounded by the violence, noise and documentary style of a very dark film. I fear the team responsible for this have forgotten just how daft, batty, ludicrous and just plain nuts the Batman series has been! Jim Carey, Jack Nicholson, Tommy Lee Jones amongst others, including an incredibly sexy and OTT catwoman, have all stepped up to the plate and played their roles perfectly, to our expectations. However this latest offering appears to be nothing more than an appeasement to the die-hard gore seekers. Yes there are memorable moments and at points I felt some scenes were thrown in just as a casual nod to Batman of old, to try and keep us oldies happy. But the sheer level of violence and realism throughout left me cold. If this is entertainment, leave me out of it. I felt I was watching a training video for aggression and insanity at times, and this is one film that I will not revisit.

was really dissapointed with this film.i had heard how good it was from various freinds but i finished watching this film being a bit let down by it.same old story with films nowadays all action no storyline.i dont like christian bale as batman.allthough ive seen him in other films and thought hes a good actor i dont like him in the batman films.everytime he spoke as batman i found my self laughing because 1.i couldnt understand a word he was saying and 2.because as batman he is laughable.the only good thing to come out of this film was the acting by heath ledger who i thought was brilliant!lastly batmans love interests over the years have been some of hollywoods a listers.why the hell did they cast maggie gyllenhall?? very dissapointing!!!!!

I have to confess that I'm not particularly a fan of comic strip but my wife is and this film had excellent reviews so I hired it. In summary this film could not be criticised for lack of action, (it is non stop), or the acting; Heath Ledger is indeed brilliant as the evil (very scary) Joker and Christian Bale and Michael Cain play their roles well, but the film has a very flimsy plot and is far too long! Also 12 Certificate? I'm not easily shocked but this film is extremely violent and I won't be encouraging my 13 year old to watch it.

I was not particularly impressed with The Dark Knight but that's not surprsing after something gets rave reviews it usually turns out to be the opposite. Disappointing.

Films made in the US are guaranteed to be dreadful, and this Batman (sans Robin) film is no exception. Much violence, many fast cars and traffic accidents, a huge number of silly people, inaudible dialogue and no humour (not even the Joker had jokes). A complete waste of time (and money). I wish I had read the other reviews earlier - I wouldn't have bothered!

Not enthralled. - The Dark Knight review by BE

I can appreciate Heath Ledger gave his all in his performance as the Joker. Nevertheless, I did not like this movie very much. The sound effects were so very noisy, I had to keep turning the volume down, then up again for the dialogue as it then could not be heard.  I didn't understand the dynamics between all of the main characters so the movie was lost on me. I watched it on the back of Todd Phillips' movie 'Joker'. Not a patch on that brilliant movie

The Dark Knight is an emotionally exhausting film that shocked and moved audiences by asking them how they would respond to unrelenting, irrational evil, its very title a byword for how relevant and insightful a superhero film could be; it has cast a long shadow on every comic book movie since. For me, The Dark Knight tells me to “endure.” It’s a message that’s arguably more potent now in the midst of the Trump era, as opposed to when the film came out at the tail end of the Bush administration. When the film came out, it felt like people had stopped worrying about terrorism. Now, it feels like more and more people are willing to give up virtues of tolerance, respect, and generosity for some feeling of security. It reminds me that there’ll always be heroes out there, under-appreciated, sometimes despised, but nevertheless always ready to do the right thing, never giving into anger and despair.

I write the 8th review to date. All 5 scores (from 1 - 5) have been given. I am surprised anyone would give this less than 3 stars. It is quite long and the plot is not that original or dynamic but come on this is batman. Heath Ledger's flat was allegedly a shrine to the joker when he committed suicide. I can imagine that he devoted himself entirely to the role, it is utterly mesmerising. The tortured evil is utterly convincing. Caine and Bale are belittled by his brilliance. His death is a devastating loss.

Doesn't get 'Bat'ter than this! - The Dark Knight review by CP Customer

Old style Bad Guy versus Good Guy (with a drak side) action with an undercurrent of drama.

This will surely be a classic film that will be watched by many future generations.

Heath ledger's performance is surely guranteed to earn him a posthumous oscar.

Overall, A great addition to the franchise!

A decent sequel. - The Dark Knight review by CP Customer

This is pretty much a standard sequel to Batman Begins and Christian Bale's husky voice often comes across as a bit annoying, but the film is saved by an outstanding performance from Heath Ledger as the Joker. There was a lot of hype surrounding Ledger's performance and for once the hype is worth believing, with Ledger turning the Joker from a comic book villain into something far more dark and sinister. Clocking in at over two and a half hours running time the film was probably a bit too long, that said it does hold your attention throughout and it's worth renting just for Ledger's performance alone.