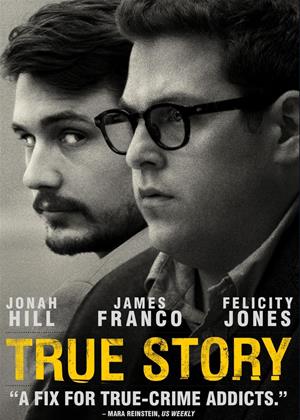 True Story attempts to seek parallels in the psychology of both journalists and killers. Michael Finkel (Jonah Hill) is fired from his position at the New York Times for stretching a story. He finds himself drawn to arrested murderer Christian Longo (James Franco), accused of murdering his wife and child. Longo took on the identity of Finkel when he was arrested, stating that he admired the his writing. The two connect during visiting hours hoping that they’ll both get something out of talking to each other.

When I initially viewed this picture, my wife remarked on the cover which features both Hill and Franco. “Why are you watching a movie with James Franco and Jonah Hill?” she asked with a raised eyebrow. I informed her that it wasn’t a comedy, a genre with which I have rarely favored between the two. I can sense the desire of the two actors who want to be more and they’ve certainly had their moments over the years. But this time they’re given roles that may be a little too big for them.

That being said, they do the best that they can for trying to match the accuracy of these two real life figures. Hill puts forth his most subtle performance as a hot shot writer who shrinks down to a man desperate enough for a story. Franco does have a certain unease to his character the way he makes his dark testimony of how the murders went down. But the two mostly seem to be more pulling back than pushing forward, fearing they’ll slip too easily into comedic mode in the scenes they share.

The plot proceeds fairly passive as a straight courtroom procedural drama. Longo slowly reveals his side of the story, Finkel carefully tries to piece together the events and the public reacts negatively towards both of them. When an investigator tells Finkel that Longo’s story is not worth hearing, he gives the expected reply that everybody’s story deserves to be told. When Finkel approaches the family of the victims during the trial, he is lashed for trying to further his own career in writing about a killer.

The most engaging parts of the story mostly center around the conversations of Finkel and Longo. They both write and aspire towards creating the best story they can. While providing Longo with lessons in writing for exchange of information he can use, Finkel inadvertently explains the rules of whipping up a story being more manipulative. He takes note of Longo’s frustrations with not being able to afford a toy for his daughter as any parent can relate to that feeling. He harps on the teddy bear Longo placed with his daughter before her death, signalling a part of her innocence being lost forever. In his mind, Finkel is just doing what he thinks is good writing. It doesn’t cross his mind that he may be coaching Longo into being found not guilty until it appears to be too late.

True Story does succeed here and there with some emotional displays of relaying the murders. The movie opens with Longo’s daughter being put in a suitcase with her teddy bear being tossed in. We’re even shown the autopsy of the suitcase that was thrown in the river with all the water, dirt and sickening imagery of a drowned girl. This imagery continues to be present as the trial puts Longo on the stand.

While True Story has moments of intensity and questioning, it’s still held back by its pacing and script. I can’t help but feel that there was much more to explore on such a real life topic that is hampered for playing up the dynamic of Longo and Finkel. It’s also rather base in how it approaches their mindsets with not much going on under the surface of the obvious lies and the goals they seek. Perhaps with more character development and a greater understanding of the lies, True Story could have been something of a unique crime drama. But as it stands in the hands of director Rupert Goold, it’s better suited for a TV documentary.