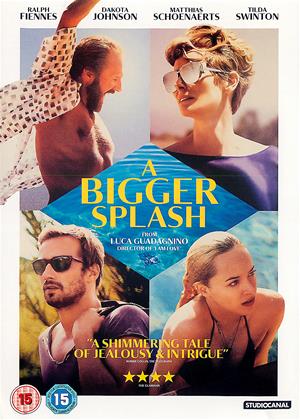 Reviews (6) of A Bigger Splash

Unfortunately he is so annoying that I had to give up on this film after an hour and a quarter. Tilda Swinton plays a rock star who has lost her voice, so she doesn't say much. Matthias Schoenaerts plays her drippy filmmaker boyfriend, and Dakota Johnson plays a really annoying American. Fiennes is Swinton's former lover and descends uninvited with his daughter (Johnson) on Swinton and Schoenaerts Italian island hideaway. He then proceeds to annoy the hell out of everyone with his manic exuberance whilst seemingly trying to win Swinton back.

Maybe the final thirty minutes were a lot more interesting but as the characters were unsympathetic, the plot very slow, and Fiennes such a pain in the derriere, I will never know. I think that this is the sort of film which critics like a lot more than the public.

A Minor Drip - A Bigger Splash review by Alphaville

This unnecessary and ill-imagined update of 1969 French film La Piscine soon outstays its welcome. If the original French film was languid and slow-moving, this pointless update moves at a positively glacial pace. A sense of ennui pervades both acting and direction. The plot goes something like this: nothing happens for the first 90 minutes, then something happens, then the film ends 30 minutes later. It’s all about the predictably complicated relationships among the featured quartet of characters but it’s impossible to care. It’s little more than a soapy potboiler.

Ralph Fiennes plays the only character with any vivacity, but he’s such an overbearing bore that he’s as much a pain to the viewer as he is to the rest of the cast. To warrant the title, there’s a lot of jumping in the pool of a Mediterranean villa, where most of the inaction occurs. There’s a clichéd local festival. A few brief flashbacks are thrown in for no apparent reason save to break the monotony. One star for the island of Pantelleria, which looks nice in the sun.

Disappointing - A Bigger Splash review by BE

What a silly film. Contains gratuitous sex and with very little storyline until near the end. Tilda Swinton as an unlikely pop star wearing unattractive clothes, two sizes too big for her. Apart from Ralph Feinnes, all characters bland and annoying. What a waste of time and money.

Ralph Fiennes really carries the film with a tremendously charismatic performance. The other characters are rather low key but the film works. Not one I would like to watch with my children as some rather embarrassing love scenes and it is only rated 15. A film that makes you think though around joie de vivre versus staying safe and being square. The music is fun, especially for Stones fans!

I went for this as a Fiennes fan, wonder why he did it? Perhaps they bought him with loads of dosh to try and give it some creditability. Ropey, can't find anything nice to say. Sunshine was good.