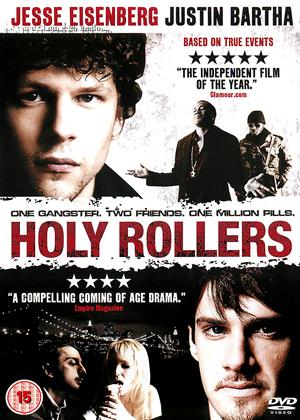 Hasidic Jew Sam Gold (Jesse Eisenberg) is on his way to become a rabbi with an arranged marriage with a fellow Orthodox Jew looming in the horizon. But life in his community in Brooklyn serves as the backdrop for an uninteresting life. Sam’s family owns a fabric shop, they live simply without ambition to get richer, and all is set including his future. His best friend Leon (Jason Fuchs) has accepted this kind of life, and outperforms Sam in every way; so much so that Leonis even chosen to be the perfect pair of Sam’s almost fiancée!

When Sam meets Leon’s older brother Yosef, un-Orthodox in every way complete with bling and swagger, Sam’s interest is piqued. He gets asked to bring ‘medicine’ from Amsterdam to New York, an easy task, but Sam soon realizes he’s actually a drug mule for Ecstasy. Sam finds the drug trade fascinating and he even earns extra cash on the side. Will Sam become a head honcho in the illegal world of drugs? Such is the premise of ‘Holy Rollers’ directed by Kevin Asch.

‘Holy Rollers’ is based on real events that happened in the 90s when it was discovered that Hasidic Jews were being used to transport drugs. See, back then Hasidic Jews are not suspect for any criminal activity and they go through airports with ease. Having them as drug mules was the most perfect idea.

Of course, with every crime comes a corresponding punishment, and in ‘Holy Rollers’, you will get to see both. Jesse Eisenberg who starts out as an innocent Hasidic Jew and turns into Justin Bartha’s un-Jew in every way, are totally instant BFF’s in this one and it shows. We see Eisenberg’s character come-of-age and Bartha’s going ‘Less Than Zero’ on us. The polar opposites of conservatism, simplicity, and traditions of Hasidism are juxtaposed with the mechanical and monetary dynamics of drug dealing amongst willing participants.

It is rather unclear why Eisenberg’s Sam chooses the path of drug dealer since his motivations are also flimsy at best. Is it curiosity or stupidity?