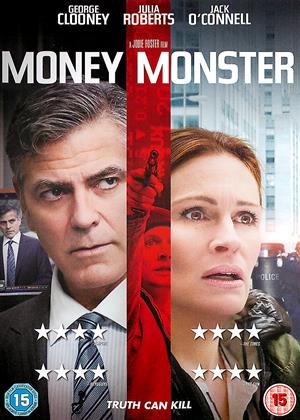 This is a very watchable movie - it has some wonderfully awful characters (and people in TV really ARE as bad as this, I know).

It's not in the same league as a film like MARGIN CALL but it does address the serious issue of the money markets and how that can affect people's lives and lose a lot of people a lot of money.

The film progresses well with lots of tension and a real sense of not knowing what's coming next.

NO SPOILERS here - but the 3rd act really didn't do it for me. I'd rather an alternative ending!

The international plot stretches credulity, but that is fine in a satire.

This is a short film but as long as it needs to be. I mostly enjoyed this cynical and dark satire on raw capitalism.

George gets his comeupance - Money Monster review by NC

Watch Network, with Peter Finch, to see the power of the press. Great film. Quite a few hostage/TV-coverage films, Al Pacino in Dog Day Afternoon had media support as well................Film jogs along and keeps attention, so worth a 3.

Good little story, well told. Decent tension throughout. Would have had four stars were it not for Clooney's typically average acting.

Not my cup of tea - Money Monster review by JJ

Dissapointing another George Cloony disappointment.. Boring silly story, watched it but kept wanting to turn it off.

Money Monster is a fairly well put piece that just can’t for the love of god put its money where its mouth is. I’m purposefully over-exaggerating with analogies because this is exactly the cornerstone upon which Money Monster rests: expectations that don’t quite live up to the standard set forth in the sole beginning of the movie.

With an intriguing premise and the combined efforts of director Jodie Foster, all-star George Clooney and the always charming Julia Roberts, it seems like narration-wise – Money Monster’s story just doesn’t build up to fruition as it goes. By tackling the subject of morbid fascination with death and decay in a world full of it, the feature is providing a satiric touch upon a premise that finally overpromises and under-delivers.

Lee Gates (played by Clooney) anchors ‘Money Moster’, a full-blown, over-the-top series in which he frantically gives financial advice in regards to stock markets and stock trading. Unfortunately, due to a hiccup in the algorithm of trading (for which stockholders lose nearly 800 million pounds), certain CEO Walt Camby is summoned to the studio in order to shed light to whatever happened during the technical error.

And that’s when Jack O'Connell’s character enters the scene fully armed and demands explanations as to what happened.

In continuation, and we’re witnessing a cat-and-mouse chase in which greed topples whatever dignity honest people had left in them. George Clooney’s charisma plays well in the overall formula, providing excitement even when Foster’s real-time filming choice grinds to a halt.

Other redeeming qualities are present, but realized well before the actual movie opens to its audience. Clooney’s character arc is worth mentioning, since his slimy persona of greed slowly turns to a man of conscience who seeks redemption from the very same he tricked for money. It’s also everything and anything we’ve already seen before, in better shape than anything Money Monster throws at us.

Overall, the message Money Monster channels is both contradictory, and overly pessimistic at that. On the one hand, Jodie Foster transfers blame of all constantly occurring ‘irregularities’ in modern finance to other entities – be it technical errors in software, ‘external players’ from overseas, or the ever-present danger that is the invisible, natural flow of the World – i.e. capitalism.

On the other, Money Monster doesn’t provide alternatives: it just bashes the current system without a call-to-arms for everyone to work harder and solve a current financial predicament, for the time being at least. And if you’re just bashing things without real essence, then you’re probably either Slavoj Zizek, or you just don’t care about the ways of the world.

That said, you can probably extrapolate some fun from Money Monster, but in order to do so – you may need to dig deeper to find it.