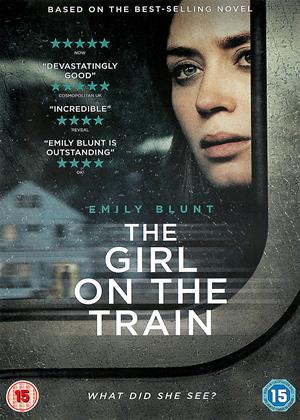 Rent other films like The Girl on the Train

Reviews (15) of The Girl on the Train

Emily goes acting, again with effect. - The Girl on the Train review by NC

Read the book, but could not remember much. Quite well crafted film, and Emily does the biz again in the acting department. Almost done like a stage-play in some ways. The scenes are quite tight. Something a bit different for sure..............

I found this film a little slow to get going, but once I was in, it really had me. I thought I had it pegged as an 'unreliable natrator', which it was, but the twist completely caught me out.

Interesting story - The Girl on the Train review by WR

Hadn't read the book, so didn't know what to expect from the story - perhaps a mystery/murder scenario? The way the story unfolded was well crafted and kept you guessing until towards the end. Good to be entertained without "blockbuster" tactics.

Disjointed, difficult to follow, implausible and grim - The Girl on the Train review by RR

It is one of the worst films I have seen. Could hardly follow the plot but film got so bad it wasn't worth replaying it to work out the thoroughly disjointed time sequence. Waste of time

Disappointing movie - The Girl on the Train review by SH

Had great expectations for this movie but watching it - sadly - they were unfulfilled.

I like Emily Blunt but found her 'dead-eyed' staring into the camera a bit repetitive and unconvincing.

Was able to guess 'who-done-it' before the character was 'exposed' which ultimately left me feeling disappointed that I was able to figure it out!

Am guessing 'A Quiet Place' will be a better one to watch when it becomes available!

Spoilers follow ... - The Girl on the Train review by NP

Ah, the private torment of the ‘secret’ alcoholic – which really isn’t a secret at all, which makes things even worse, and has you reaching for the Vodka. Emily Blunt is excellent as Rachel Watson, the main character, in this terrific adaption of Paula Hawkins’ successful debut novel of the same name. The skin-crawling description of Watson’s daily nightmare is recreated with equal relish here by director Tate Taylor. The moving of events from recognisable English suburbia to America works a lot better than I had anticipated, helped by a cast of actors from both sides of the Atlantic.

Happily, Blunt’s excellence does not exist in isolation. The ex-husband, the other woman, the other other woman, her ex and the splendid DS Riley (Allison Janney) all utterly convince as a nest of truly flawed characters. Their rough edges keep things interesting and stop events ever sinking into the melodrama they might otherwise have done. Watson’s hapless stumbling leads her into and out of trouble, her condition never allowing us to take too seriously any of her wilder accusations. Which is interesting, as some of them may be true …

A fascinating drama then, beautifully shot, both as an adaption and in its own right.

A spooky journey - The Girl on the Train review by HM

An intelligent plot, taking what at first appears to be a personal issues drama to a dark place. It simply becomes a mystery murder adventure with twists along the way. Thoughtful instead of violent for a change. Much recommended for those that don't want their suspense films spoiled by gore and gratuitous violence.

Classic European style Psychotic Thriller! - The Girl on the Train review by CS

I've read some hugely widely varying reviews of this film, but can't understand why it has received such bad reviews, when in fact, or at least for me, it's actually quite a good film to watch. A classic psychotic thriller, that has a slightly erratic and irritating beginning which may lead you to switch off but bear with it and you see why when it all starts to unravel and the story unfold! I actually thought this came across as quite a slick european styler thriller, a classic whodunnit, with lots f twists and turns. The constant flashbacks can get quite confusing as can the fact that two of the characters look virtually the same, but this isn intentional as you will discover later on on the film why! All in I was pleasantly surprised at what a god film this actually is and quite enjoyable too, of not slightly disturbing!

The usual thriller which does not explore its own theme about a culture where people have no true sense of themselves because they are devoid of a personal identity.

Without a heritage or a sense of achievement, the White characters here suffer endlessly in a world in which they are not securely anchored to reality; making them easy targets for exploitation and abuse.

These kinds of stories are impossible to imagine coming from any other culture. They strongly suggest a world of Caucasian uncertainty and irrationality which could be more fruitfully explored within a social context which this movie only pretends to acknowledge at the film's conclusion - when much is revealed. At the end, this movie pretends that such behaviour is universally-applicable, when it is largely the product of a White culture which is both directionless and superficial.

This is a film more concerned with gloating at the poorly-hidden psychological problems of those with apparently enviable middle-class lifestyles, while also wallowing in the fact that contemporary, heterosexual marriage in the West is in crisis because women do not feel adequately protected by men who secretly despise them.

Brilliant Film! - The Girl on the Train review by ZE

Great film with lots of intrigue throughout. The twist at the end was not obvious at all which was great!

Emily Blunt was fantastic as always and is fabulous as a drunk!

Brilliant Film! - The Girl on the Train review by ZE

Great film with lots of intrigue throughout. The twist at the end was not obvious at all which was great!

Emily Blunt was fantastic as always and is fabulous as a drunk!

The Girl on the Train review by Mark McPherson - Cinema Paradiso

The Girl on the Train is the type of mystery that asks, nay, begs you to overlook its own character flaws in favor of its twisty plot. It’s a picture based on a popular book that I have not read, but, based on this movie, my impression is that it was a thick paperback sold at airport bookstores. Readers were most likely so engrossed by this mystery of who killed who, who was cheating on who and who is pregnant with what person’s child; so engrossed they forgot to ask if they should care about the people the story follows. But, for all I know, this is just a horrible adaptation.

I suppose we’re supposed to care about Rachel Watson (Emily Blunt), an unemployed, recently divorced drunk that spends her days drinking on a train and envying the lives of others. Nothing particularly interesting is happening in her life which leads her to taking an interest in stranger Megan (Haley Bennett). But Megan is no stranger as she’s the nanny and neighbor of Rachel’s ex-husband Tom (Justin Theroux). On one fateful day of spying on Megan, Rachel discovers that this woman is cheating on her husband and decides to run up to her and call her a whore. Again, nothing else going on in her life. She blacks out after the incident in her apartment with her head and shirt bloodied. And now Megan is dead. Could Rachel have killed someone in her drunken haze of spying on other people?

There’s a whole mess of clues and suspects she has to sift that I’m surprised a drunk could wade through, even when she starts sobering up. Megan had an abusive husband and cheated on him with a therapist. Tom’s current wife had a bit of a tiff with Megan because of how much she hates their baby. Megan doesn’t want another child, but is discovered pregnant when her body turns up. And was Tom cheating on his current wife with another woman?

This is all rather stirring, but consider the characters at play in this mystery. All the female characters are downers that spend all their free time drinking wine, spying on others or having meaningless, emotionless sex. Megan spends most of the movie appearing more as a character from Sin City than a New York suburb, calling herself a whore and talking an awful lot about sex she hates. All of the men in their lives are mean, abusive, cheating and mentally destructive. They’re much more suited to Sin City as well.

In an attempt to awaken the movie from its soap opera plot and pacing, the third act turns bloody. Characters are mercilessly beaten to a disturbing degree where this may as well just have been a horror picture. The movie even slips out who the true killer is in the second act by process of elimination, leaving me waiting for the eventual wheels to turn. And once they turn, they’re gunked up with blood. The true killer in this movie has such a lacking motivation that it makes me pine for those trashy BBC mysteries where the killer always wants a deed or to stop a business deal. The killer’s motive in this movie? Just being a terrible person, which isn’t a spoiler since nobody in this picture is likable.

I think what I despised most about The Girl on the Train was how it attempts to rationalize Rachel’s behavior. She wasn’t breaking and entering into Tom’s home to pick up his baby because as she puts it “the door was open” and “I just wanted to hold the baby.” She’s not a bad character who has to change because of one of the worst surprise twists that absolves her of developing herself into a better person. She doesn’t have time to fix herself when there’s a murder she can solve. Maybe she figures her drunken nature is the key to discovering and solving mysteries, which is very likely considering she is back on the train by the end of the movie. Only this time she sits on the opposite side where she can’t see suburban homes. Baby steps, I suppose.