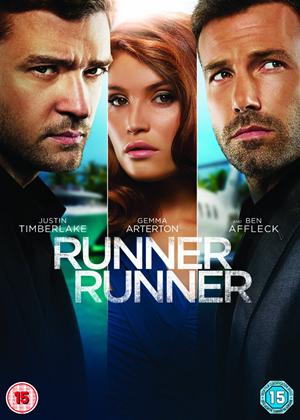 Tackling the supposedly relevant and oh so important topic of online gambling, Runner Runner is a film toying with the formula established by earlier films such as The Firm with Tom Cruise. Self absorbed and completely unrealistic, Runner Runner is a dull little feature with a cast that just feels out of place.

The film follows pretty boy Richie (Justin Timberlake), a mathematical genius who is paying his tuition to Princeton with online gambling. When he is discovered and loses all his winnings online he decides to travel to find the programmers that stole his money and get it back from the sites owner Ivan Block (Ben Affleck), a charismatic sociopath who lures Richie into his world of vice.

Timberlake is a likable actor but Richie isn’t a pleasant character, he's selfish, egotistical and pretty much everything a conventional hero shouldn’t be. In fact most of his actions bring undue pain to others. Fellow good guy, FBI Agent Shavers (Anthony Mackie) isn’t much better with his signature style of dangling informants from rooftops and chasing people down in cars in pure daylight.

It’s supposed to require a certain amount of suspended disbelief to watch and while its fun to watch people get threatened with being eaten by crocodiles, it’s only a matter of time before your film starts to look like a cheap mans James Bond with a poor substitute in slightly effeminate JT. Affleck clearly enjoys playing the villain but the role doesn’t suit him and he doesn’t bring enough conviction to the table.

As Richie and Ivan fight over Rebecca (Gemma Arterton), Ivan’s personal assistant and all around fixer the film loses the plot and the whole picture unravels in a mess of been there seen that as Runner Runner dips into the writing pools of many other, better films to bring together its supposedly twisty finale. The whole thing smacks of laziness and some may be wondering by the end of it why it even got made in the first place