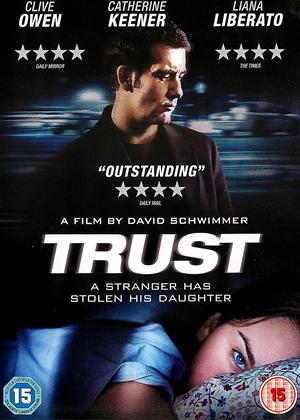 Trust is a 2010 movie directed by David Schwimmer. It tells the story of a young girl whose first adventure into the online world leads to a case of paedophilia and sexual assault. The movie investigates the impact such issues can have upon friendships and families, and delves into a rather ugly side of humanity.

Liana Liberato puts in an excellent performance as the lead character Annie and will definitely be a name to look out for in the future. The entire movie hinges on Liberato’s performance, without which the film would be somewhat over-zealous and melodramatic and could easily turn the darkness of the situation into a caricature of itself.

Thankfully for Schwimmer Liberato portrays the confused teen excellently; effortlessly pulling her from the emotional highs of her first encounters with the man who would turn out is her sexual assailant, to the hurt, damaged and defiant victim that ends the film.

Annie’s father, played by Clive Owen, is also played brilliantly, however the actions of the character seem to go a little overboard at times and make it all a little hard to swallow. The volleyball scene for example; in which he storms across the court to confront a man taking photographs of the young girls on the team; is just a touch unbelievable. Luckily for Owen the photographer turns out to be a local sexual predator, but it reality it’s far more likely he would have been a proud father. It is incidents like this that make the film sit on a precarious edge, where they veer into over-dramatics that loose the film it’s gritty darkness.

However, overall, the film is touching and thought provoking, and Liberato really helps carry the narrative through it’s almost two hour run; raising some difficult questions about morals, parenting and trust.