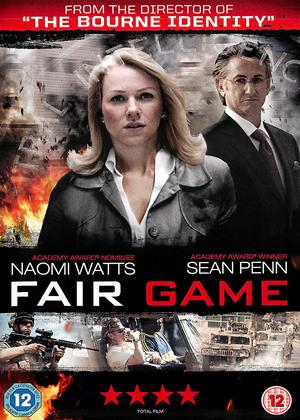 A real story about an agitator husband and an undercover CIA agent wife who are in the middle of the start of the war against Iraq. There can be few people who still believe the Blair and Bush governments acted in good faith in starting a war based on not being able to find WMDs. This is what you've been waiting to hear. It might not make you feel nice thoughts about Tony and George. I am disheartened also that this has received no awards. It is a brilliantly acted and gritty drama.

Based on the true story of Valerie Plame who wrote the memoir ‘Fair Game: How A Top CIA Agent Was Betrayed By Her Own Government, ‘Fair Game’ is a riveting tale of one of its topnotch agents whose reputation is besmirched when her husband, Joseph ‘Joe’ Wilson, writes an op-ed piece in the New York Times on then US President George W. Bush’s War On Terror in Iraq. Naomi Watts and Sean Penn play Valerie Plame and Joe Wilson, respectively; together, they traverse a post-9/11 world where lies and truths are interchangeable and what the government and its officials are willing to do so they can protect their own interests.

Doug Liman directed ‘Fair Game’ and the slick-and-quick style he founded in ‘The Bourne Identity’ is evident here, making a thriller out of a politically-themed plot without the choreographed violence. The violence resides in those who hold power in government, ruining an agent’s life’s work, her husband’s credibility, and their unbelievable peaceful existence as a suburban family. Screenwriters Jez and John-Henry Butterworth did a great job adding flair and omitting triteness to its tight script. And actors Naomi Watts and Sean Penn are competent in fleshing out on screen their real off-screen counterparts.

When you think CIA, the image of agents in stealthy-ninja garb and gear come up. But Valerie Plame is a 40-something woman who goes undercover all over the world in a power suit. What does she do when her cover is blown and it’s the same government that compromised her? ‘Fair Game’ is a great exercise in examining one’s place in the greater scheme of things:

You do good work, stay honest, practice free speech, and live the life the best way you can – but none of these is enough if even one opposes those in power. Talk about making your lives a living hell. Valerie and Joe only did their jobs, they stood for what they believed in, and yet, they suffered for it tremendously. Some secrets are more valuable than truths. Those who fight for truth will have to strike back harder to reveal it.