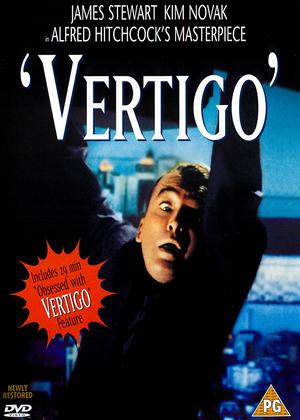 Rebirth of a classic - Vertigo review by CP Customer

The plot has an unexpected twist at the end, but if you watch the movie attentively, there are enough hints to let you lift the mystery.

The pace of the movie takes it's time, so allow yourself to be patient and enjoy the details.

For me as a video professional, it was very interesting to see in the special features how they restored the movie. And they did a truly amazing job.

This is quite simply fabulous. It has clues running through it but the end still catches you out the first time you see it. One of the better Hitchcocks and really worth watching.

This is considered to be Alfred Hitchcock's greatest achievement and it has occasionally been cited as one of the greatest movies ever made. It is certainly a masterpiece of suspense and for its time it's a bold tale of sexual obsession, misogyny and an example of the 'male gaze' theory of American drama. A mystery thriller it stars James Stewart, who was criticised for being too old for the role, who plays 'Scottie' Ferguson, a former police detective forced to retire after his fear of heights resulted in the death of a colleague. He is hired by an old friend to follow his wife, Madeleine (Kim Novak), who suffers from blackouts and Scottie is asked to keep a protective eye on her. But soon Scottie becomes obsessively in love with her and they start an affair. When another tragedy strikes and Madeleine is killed Scottie falls into a deep depression until one day he sees Judith who bears a resemblance to Madeleine. They start a relationship and Scottie tries to influence how she dresses and acts in order to look more and more like Madeleine. This has some great twists in the plot and it's a brave role for Stewart who was better known for wholesome roles. Hitchcock utilised new photographic effects to simulate the dizzying effects of Scottie's vertigo and he resisted attempts to over explain the plot. This is a major American film and certainly one that every film fan should make sure they see.

This is not Hitchcock at his best. My wife and I were really looking forward to our viewing, but found the film slow and in the end totally unbelievable. It does not live up to its reputation, which led us to expect something better. Some films, like Casablanca, stand the test of time and can be watched again and again with great enjoyment. Not so Vertigo.

Ever since the critics assembled by Sight and Sound voted this the greatest ever film, Vertigo now has a status as the ultimate Hitchcock. It deserves that position in recognition of a coming together of key collaborators: fabulous costumes by Edith Head; a great orchestral score from Bernard Herrmann; Robert Burks' innovative camera effects; the complex script by George Tomasino; and for the first time the revolutionary title design and animations of Saul Bass.

Many critics conclude that Vertigo has a value because it was personal to the director, as it imitates a film making process, of turning an actor into a character. Scottie (James Stewart) tries to transform Kim Novak into the image of a woman out of his troubled past. Though, while it does mimic that exercise, it doesn't really draw any profound conclusions. Perhaps the film's greatness depends on the answering of this question; is it a fascinating portrayal of sexual obsession, or do the characters act in such extreme ways to fulfil the requirements of a captivating but contorted narrative?

Hitch uses motifs of spirals and the images of falling (including computer graphics) which makes us vicariously experience Scottie's psychological trauma. Stewart was far too old for the part, though his performance is good.  Kim Novak gives excellent contrasting performances in a divided role. There are wonderful  San Francisco location and myths and a twisty, disorientating plot.

Hitchcock (and his team) created his own genre and it is difficult to compare his films to the work of others except to the degree they imitate. This is a quintessential Hitchcock film and a summation of his art going into the end of the fifties.

When watching this, first remember that the story comes from a novel - the sort of melodrama novel best forgotten now - and that Hitch had a screenplay to work with. I tend to get annoyed that people think film directors create everything - the story, the script, the characters. They don't/ They merely interpret it.

Having said that, this is an enjoyable watch. Very dated though - and perhaps the trendy (for 1958) dream sequence bit is the most dated of all. Strange to think just 10 years after this it was 1968 with all that implies.

Efficiently directed. Unbelievable plot twist at the end (from the book), and a plot hole in Stewart's first hotel visit looking for the girl.

The direction of the height scenes with camera effects is still effective though; probably the best bit is the opening sequence though - which has been much copied in more recent movies.