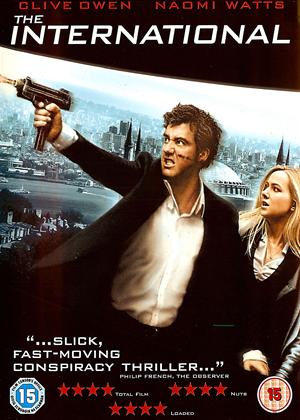 Reviews (2) of The International

What starts off as a stylish European thriller soon degenerates into a sterile and unimaginative romp. Naomi Watts is hopelessly miscast and the jury is still on out Clive Owen as a leading man. He does the brooding look very well here, but that's all he is capable of. Why it needed an American slant when Interpol is merely glossed over is never fully explained.

I have always found Clive Owen to be a 'wooden' actor - and this film is yet another example. Here he plays an Interpol agent [Aside: I thought Interpol was an information clearing house and liaison organisation that didn't have 'agents'?] working with Naomi Watt who plays an Assistant DA, investigating the dodgy activities of an international bank.

Nominally based on the real-life activities of the BCCI, here it's the IBBC whose financial muscle topples governments and finances arms deals. But it all seems a bit far-fetched and the human scale of the actors contrasts with the architecture of the amazing buildings used as backdrops. That's clearly a directorial trick - and it is the direction (by German director Tom Twyker, who I first came across in 'Run Lola Run' and more recently as joint director of 'Cloud Atlas') together with the architecture that are the real stars of the film.

The buildings used as backdrops are quite extraordinary, varying from the Berlin Hauptbahnhof, the Autostadt in Wolfsberg, the rooftops of Istanbul to the Guggenheim Museum. The Guggenheim was reproduced as a giant set for the rather good shootout sequence.

Brit actor Owen and Brit/Aus actress Watts are, quite frankly, poor. Watts fakes a unconvincing USAnian accent and as I mentioned, Owen is just wooden, despite feeble attempts to become animated.

I really wanted to like this, but after watching it I shrugged my shoulders and said 'So what'. This just might have been an amazing film - but isn't. 3/5 stars - very average.