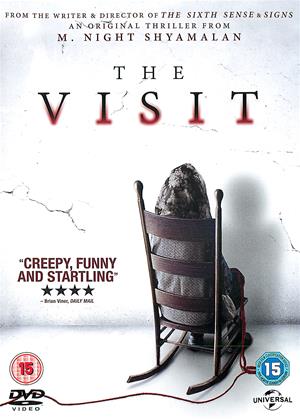 Reviews (4) of The Visit

Not recommended - The Visit review by HH

This film could have been so much better, but it wasn't convincing. Not frightening at all, in fact, just unpleasant to watch. I don't think M Night Shaylaman will ever repeat the success of the fantastic "Sixth Sense", as unfortunately every film since has been mediocre. Not worth the rental.

Worth a Visit ! - The Visit review by porky

a movie that surprised more than i expected . Not being a Fan of M Night Shyamalan I wouldn't have rented this had i realised it was his work...BUT.

It as actually pretty good. Would have been Far Better had it not been made as if the Children in the movie were filming it all themselves , hand held video cam/found film footage /spy cam etc... movies are getting pretty tedious now.

The Children are pretty good actors but to have them in Every scene was a bit wearisome and felt a bit like you were Babysitting instead of just enjoying a movie .

However. apart from the Hand held Camera nature of its production and the Children being the main part of the film it actually becomes rather sinister . Great Twisted Ending . could have done without the tagged on Family Together bit at the very end ,but the Climax was worth the wait .Sadly it could have been a lot Better and More Traumatic /Horrific but as it stands This is a pretty watchable movie. Not his greatest work,but certainly worth more than one viewing .

Becca (Olivia DeJonge) and Tyler (Ed Oxenbould) are brother and sister. Whilst Becca is putting together a film which fuels ‘The Visit’ (found footage style), Tyler raps. If you can get through these little bursts of ‘talent’ (each rap ends with ‘…ho’) without punching yourself repeatedly then you may well find these two quite appealing. They spout dialogue beyond their years perhaps, but they exhibit little of the brattishness you may expect with two juvenile leads.

The two siblings are visiting their grandparents (Deanna Dunagan) and (Peter McRobbie) and observe them displaying bizarre and disturbing behaviour. Occasionally, this seems to be educating us that ‘old people are gross’ and reinforcing stereotypes that once you’re over 60, you’re senile and incontinent. But luckily, most of their behaviour is clearly portrayed as abnormal in an effective ‘horror-film’ kind of way.

Being an M. Night Shyamalan film, there is a twist. SPOILER – their grandparents are not their grandparents. They’re escaped lunatics. That’s right. We are supposed to believe neither Becca nor Tyler have never been shown a photograph of the two relatives they are to spend a week with.

The idea of a progressively unstable elderly couple seen through the eyes of young children could have been terrifying. But, apart from a couple of stomach-churning moments, it doesn’t quite make it. And why does it take the police so long to arrive?

By the time the end credits roll, another of Tyler’s raps – he’s dressed in baseball cap and gold chain, of course – 99% of an empathy you may have had for the character has well and truly disappeared.

Terrible. If you like self indulgent films that attempts to gush/force out "personality" of characters. This is the film for you. Really embarrassing!!!

For a director that specializes in left-field plot twists, M. Night Shyamalan has become rather predictable. There’s no longer a twist when you expect it coming and start watching the movie with critical eyes. He needs to breakout of this box he’s written himself into. Instead of trying to attempt something new and engaging for his abilities, the once famed director retreats into comfy trend of found-footage hour movies. Doing so will at least give him another gimmick to toy with.

The Visit starts off, as most of Shyamalan’s stories do, with an intriguing premise. Two kids, Becca and Tyler, are dropped off at their grandparents’ house for an extended stay while their mother goes on vacation. They have never met their grandparents before and are not sure what to expect. Does this seem off? You bet, but the movie’s weird twist and horrific plot can’t proceed unless the script makes such exceptions. Of course, one of the children has to be constantly filming everything otherwise we won’t have our gimmick. The brother and sister start noticing that grandma and grandpa are acting rather strange. They walk aimlessly at night, put guns in their mouths and warn the kids about going into certain areas. I’m doing my best not to spoil the twist of this movie, but from that last paragraph and the opening scene of the mother dropping off her kids, you can probably deduce how this will all play out.

What I will spoil is how cringe-worthy the whole movie feels with moments of hilarity that are not at all amusing, horror that is not all that scary and grossness that is more vomit-inducing than clever. Let’s just say one scene involves an adult diaper and it doesn’t end well. At one point the brother begins to display his musical rapping skills to the camera which made me despise this horror genre even more and temporarily lose faith in the next generation.

The way Shyamalan wrote this story comes off as one of the more mediocre episodes of The Twilight Zone or Alfred Hitchcock Presents. There’s a creepy atmosphere, a mystery, deranged characters and a surprise ending. But the longer the story lingers on its lesser moments of life at the grandparents’ house and the craziness of grandpa attempting to kill himself, the kinks in the armor become so apparent to the point where it’s almost laughable. It’s a scenario that can only be made possible with some of the worst parenting and oblivious of children to recognize that there is something seriously wrong with these old coots.

While watching this picture, I kept thinking about how far Shyamalan has come in his career. He was once hailed as the new name in thrilling and intriguing horror - the type of movies you could convince your grandma to see. Now he’s making cheaper horror pictures where he’s relying on both his old bag of tricks and adopting the last leg of the found-footage horror genre. I wanted to pull for this picture on that level as this could be a chance for Shyamalan to do something simple on a smaller budget - to really flex those writing and directing muscles without all the special effects money can buy. But the painful feeling seeps in that he won’t get better the more the movie goes on.

The Visit is certainly not Shyamalan’s worst picture by a long shot, but it does little to offer hope for the future of this filmmaker. He was once the new face of horror and now he’s just another face in the crowd.