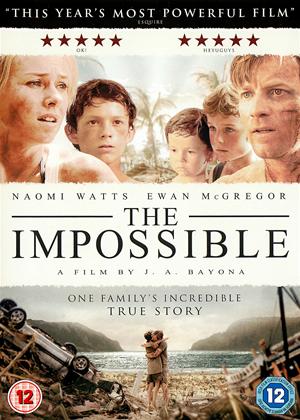 Reviews (4) of The Impossible

This is an affecting true-life story about a family searching for each other in the aftermath of the 2004 Thai tsunami. It’s so well staged, acted and directed that you’d have to have a heart of stone not to warm to it, especially with swelling violins telling you how to react. It wastes only 15 minutes in getting to the exciting tsunami sequence, but the majority of the film is spent in hospitals afterwards, where things get a bit maudlin and samey. No opportunity to manipulate audience emotions is spared. It certainly wouldn’t bear a second viewing, but if you enjoy a good tearful wallow get a box of tissues ready and draw up a seat.

Below average Hollywood-style trivialisation - The Impossible review by RP

It is estimated that up to 250,000 people lost their lives in the tsunami that followed the undersea earthquake in the Indian Ocean in December 2004. The countries affected included Indonesia, Sri Lanka, India and Thailand - and this film follows the fortunes of one family in Thailand as they struggle to survive, are separated, then, against all odds, reunited.

I *hated* this film. While it may be based on a true story it is an over-sanitised, white man's tale that trivialises the sufferings of the local population and focuses on a few English-speaking tourists. The larger tragedy is simply used as background material for the central characters as they pretend to grimace in pain against a background of a terrifying natural disaster.

I also disliked the fact that the central family was Spanish and yet was changed to British for the film - is the white man better box office? But at least the film was made by a Spanish company. Over 5,000 Thais were killed (and over 150,000 Indonesians) and yet we focus on a small over-privileged British tourist family? To me, this really is trivialisation.

Naomi Watts gained an (in my opinion, undeserved) Oscar nomination for her performance, Ewan McGregor gave one of his usual wooden performances, but young Tom Holland was excellent.

It's all very prettily photographed, the tsunami scenes are well done, but I disliked it intensely. I'll give it 2/5 stars because I've seen worse, but frankly this is below average Hollywood-style trivialisation that I didn't expect to see in a European production.

The most moving film I watched in a long time.... If you do not believe in a God then I don't know who you could say there isn't someone out there looking over us. To think of what this family went through was surreal. The acting was great, those children were brilliant for all the ages of them in such a moving film

The copy i watched really was impossible.It was a documentary No dialogue and although the acting was excellent especially by the children, the commentary begins to annoy by the end of the film

Based on the real life story of a family of tourists caught in the Thailand tsunami of Boxing Day 2004, Naomi Watts and Ewan McGregor star as husband and wife who, on holiday with their three sons, are separated by one of the worst natural disasters in living memory.

Beginning with establishing shots of the beautiful and exotic paradise of an East Asian holiday resort, complete with sunshine, calm oceans and colourful tropical fish, the film quickly switches to a harrowing and intense depiction of the infamous aforementioned tsunami; separated from the rest of her family Maria (Watts) finds herself plunged under the raging water, near drowning, her skin and body battered and torn as she collides painfully with debris. Later scenes in the hospital as she lies in bed, unsure of the whereabouts of her husband and two youngest sons, her physical pain is matched only by her emotional torment, the terror in her eyes at the moment of the tsunami’s impact a pale shadow to her fear for her family.

Husband Henry (McGregor) with their youngest children, Thomas and toddler Simon, searches desperately for his wife, and utterly confused and shocked by the events that have just taken place, makes a heart wrenching phone call home that is one of the hardest scenes in the movie to watch.

Aptly titled this story tells one of human survival and spirit, demonstrating that regardless of the circumstances sometimes the impossible is in fact possible. Thanks to superb performances from Watts, McGregor and their on screen children (with special mention to Tom Holland who plays eldest son Lucas) and a surprisingly gentle direction from The Orphanage’s Juan Antonio Bayona this disaster movie is far from the action filled spectacles produced by Hollywood but instead is a moving and insightful piece of drama set against the backdrop of a tragedy that affected people the world over.