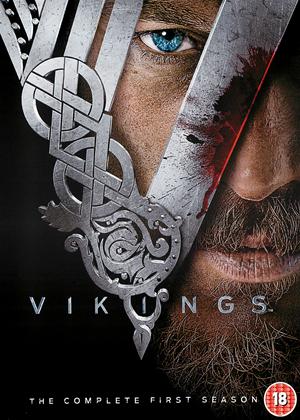 I'm sure a lot of work went into making this historically accurate but this is essentially a drama and a very good one. There are however some factual sillinesses: on the first visit to Britain the Vikings storm Lindesfarne and find Cuthbert the first English christian. A year later they raid England again when everyone has become devout Christians with more bishops than soldiers. They come across a priest who can speak the Viking language even though no-one had previously dared to cross the North Sea from Scandinavia to England, also no-one had crossed the North Sea or presumably the Channel because they apparently had no means of navigation (stars hadn't yet been invented).

The facts aside, the brutal drama is utterly compelling, and some of the history may be true, (I'm not sure that the Vikings did sacrifice friends and relatives to the Gods but this film made me think it could be true). The costumes, the set, the battles and fights are believably genuine; the gore factor is pretty high and the 18 certificate due mainly to the fights. The main motive for pressing the remote control to start another episode even though the time might be 2 am is that it is a brilliant drama with tons of plot and utterly believable characters.

This generally enjoyable series has strength and weaknesses.

It's well-filmed and acted, esp the Floki and monk characters, and has lots of battle action etc. Easy-to-follow plot, though NOT historically accurate at all, for sure. It;s all imagined. I do worry some younger viewers will watch such dramas and think it all fact.

However, we yet again see 'Wonder Woman' scenes - to placate the #MeToo demands. The fact is that Viking warriors were men, not women, and a woman defeating several armed male attackers is absurd. BUT this series does not indulge in such pc casting and scenes as much as some virtue-signalling TV dramas, which absurdly cast black actors as 16th century English dukes!

The strength for me in this drama is seen through the eyes of the Lindisfarne monk taken as a slave - the moral questioning of barbaric 8th century Viking traditions which he struggles with but which the Nordic communities accept as absolutely normal. That moral ambiguity is interesting, as if the Vikings are aliens to be understood for traditions which would disgust and horrify more 'civilised' people in England (France is mentioned as wealthy here so I expect the Vikings will rock up there in future series).

Just a note: this is set in late 8th century when Britain and England was indeed prosperous with resources and Christian BUT England was not united until Alfred the Great (who died in 900 AD) and his son.

However, I suspect the portrayal of English warriors as rubbish fighters compared to Vikings is silly as ALL warriors back then would have assumed heaven awaited them if they died in battle.

I expect future series to show the Vikings as peaceful farmers which most were - many years ago I went to a British Museum exhibition about the Vikings which made that clear.

People should remember that the Vikings influenced the development of Britain - it's in the place names, for a start, all over Britain, Wales, Scotland and England.

I watched this after the absurd series Britannia, and this is not quite as OTT or fantastic as that, though some of it is clearly designed to appeal to a Game of Thrones audience who like blood and violence and sex scenes. Sometimes the tropes are pure horror movie.

THIS IS A MUST FOR ALL THOSE THAT LOVE GAME OF THRONES WELL WRITTEN AND WELL DIRECTED ,THE ACTING IS OF A HIGH CALIBRE AND THE PLOT IS EASY TO FOLLOW.

THE ONLY DRAWBACK IS THAT I STARTED TO WATCH THIS ON A SATURDAYNIGHT AND DIDNT LEAVE THE SCREEN UNTIL THE FINAL CREDITS ON SUNDAY.

With the advent of Game of Thrones, studios have been looking for series that embrace the serious emotional stakes of the aforementioned series but are more grounded in reality. Vikings is such a series as it uses the history of a group of Viking raiders and their families to bring vicious fighting to life in a unique way. Thats not to say the twists and turns Vikings provides are bad, in fact, it’s the opposite.

Vikings follows the ambitious viking Ragnar (Travis Fimmel) and his journey from loyal viking to the leader of the whole group. Along the way Ragnar must face off with those who intend to keep their power including Earl Haraldson (Gabriel Byrne), a vicious leader of Ragnar’s group. However Ragnar must also contend with his family, especially wife Lagertha (Katheryn Winnick) whose own ambitions and family ideals often find Ragnar balancing more than his own desires.

Beautifully filmed in delightful locations and full of interesting and realistic traditions and reactions, Vikings is an impressive historical series that doubles as fast paced drama. Ragnar and Haraldson’s contentious relationship makes for some excellent episodes and Fimmel makes an unpleasant Ragnar seem sympathetic despite the death he brings to those he raids with his family and fellow vikings.

It’s easy to find your favourite in Lagertha as Winnick is terrific in the role and while the series doesn’t quite scream family drama it proves an emotional series as the harsh world the series presents forces family dynamics you would not expect and actions that make for some complicated moral viewings. While Ragnar is the draw and his drive to get more and more takes the lead you will probably stick around for the way life is lived in this new and exciting series that will tell a fast paced story in very little time at all.