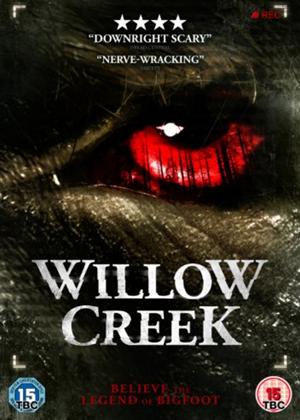 Synopsis:
Jim and his girlfriend Kelly are visiting the infamous Willow Creek, the alleged home of the original Bigfoot legend - the tale of huge ape-like creatures that roam the forests of North America. It was there that in 1967, the legendary beast was captured on film and has terrified and mystified generations since. Keen to explore more than 50 years of truth, folklore, misidentifications and hoaxes, Kelly goes along for the ride to keep Jim happy, whilst he is determined to prove the story is real by capturing the beast on camera.
Deep in the dark and silent woods, isolated and hours from human contact, neither Kelly or Jim are prepared for what is hidden between the trees, and what happens when the camera starts rolling...
Actors:
Alexie Gilmore, Bryce Johnson, Laura Montagna, Bucky Sinister, Peter Jason, Timmy Red, Steven Streufert, Shaun L. White Guy Sr., Nita Rowley, Tom Yamarone
Directors:
Bobcat Goldthwait
Producers:
Aimee Pierson
Writers:
Bobcat Goldthwait
Studio:
Kaleidoscope Home Ent.
Genres:
Documentary, Horror

A film with no ending - Willow Creek review by CP Customer

A film made with a camera . A careless couple go camping with no gear or compass searching for bigfoot but get lost and film all sorts of strange things, but you are left wondering what or who has taken them - a bear. the river people or perhaps bigfoot .... a lousy ending

You've seen this all before. Stupid adults searching for local folk lore, get lost, get killed. Nothing new or of interest.

Do not watch this film it is shit worse thing I've seen , thought it was gonna get better but never did wasted over an hour of my life

A lost-footage film written and directed by an American comedian is bound to have comedic elements within, but happily, Bobcat Goldthwait’s Bigfoot story also contains many moments that work very well as a horror film.

Some people feel that the use of shaking webcams and documentary-style narration has been overused in the last 15 years. To me, however, it is just as valid a way of telling a story as any other, providing the story is good and the characters are interesting.

Willow Creek begins in fairly jovial fashion with Jim trying to convince his girlfriend Kelly of the validity of his mission to track down the legendary Bigfoot. The only problem in their otherwise appealing relationship is her reticence to enter into this whole-heartedly although she clearly enjoys how the fabled monster has lead to various tacky tourist attractions as they near the woodland locations.

The transition from this into horror territory is a double-edged sword. We like Jim and Kelly, and so we worry for them when things turn nasty. However, the similarities between what happens and various elements of The Blair Witch Project are undeniable.

There is a scene, however, which is quite spellbinding. As night once again arrives, strange noises – and the seeming approach of a large, ferocious animal – mean that the couple are trapped in the tent, reacting to every sound they fear. It dawns on the viewer that this scene is a long one, and the tension has been growing throughout. The scene is shot in one long take and is communicates the fear really well. Of course it could be worse. Imagine if there was more than one creature out there … ?

[Plot spoiler] The ending has lead to some confusion. It appears that, from a brief glimpse, there was a woman – or women – that tends to the Bigfoot creatures and leads them to their victims. They would appear to be former missing children now grown, feral and either under some kind of spell or unable to escape their captors. This isn’t made hugely clear, but certainly provides an effective shock as events draw to their grim conclusion.

If I could rate it lower than one star I would, it's terrible and so so boring. Nothing happens throughout the film at all. Usual story a couple go in search of big foot. Kept watching thinking it would get better it never did . Nothing happens in it all. DON'T WASTE YOUR TIME WITH THIS.