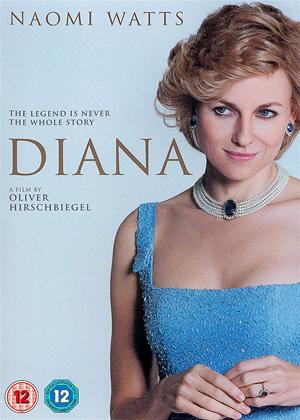 Synopsis:
Celebrated and adored by millions, she was the Queen of people's hearts, yet the bittersweet story of the last man to truly capture hers has never before been told. Princess Diana (Naomi Watts), at one time the most famous woman in the world, inspired a nation with her generosity, compassion and kindness - and in her final years she would meet the man who, in turn, inspired her. In a story that until now has remained untold, 'Diana' introduces a time in the Princess's life that was uniquely important in shaping her final years, fulfilling her search for true happiness and sealing her legacy.
Actors:
Naomi Watts, Naveen Andrews, Cas Anvar, Charles Edwards, James Puddephatt, Douglas Hodge, Ilan Goodman, Geraldine James, Prasanna Puwanarajah, Rose O'Loughlin, Michael Hadley, Juliet Stevenson, Max Wrottesley, Christopher Birch, Nathaniel Facey, Max Cane, Mary Stockley, Micah Balfour, Will Chitty, Jonathan Kerrigan
Directors:
Oliver Hirschbiegel
Producers:
Robert Bernstein, Douglas Rae
Writers:
Stephen Jeffreys, Kate Snell
Studio:
E1 Entertainment
Genres:
British Films, Drama, Romance
Countries:
UK

We enjoyed this film but I kept forgetting the actress was playing Diana. I hadn't realised that the Surgeon played such a big part in her life (maybe he didn't...). Would recommend watching. It brought back memories of the day I spent sitting on the settee, crying in my pyjamas - all day. I can quite understand the effect Diana's death it had on people.

While its all well and good writing a film about a famous woman trying to find love in a world with its constant eye on you, it changes somewhat when that woman becomes Diana Spencer, prince Charles ex wife. The film not only displays a huge amount of distasteful moments for Diana (and women everywhere I’d hazard a guess) but it also makes light of an extremely complex woman, it simplifies a story to be sensational, to be avant garde and all it comes off as is slimy.

Diana follows Diana (Naomi Watts) following her divorce from Charles as she tries to get her life back on track. When she meets surgeon Hasnat (Naveen Andrews) she is shown a new side to her life but he is less than willing to accept the strings that come with it as Diana tries to keep things together.

Not only is the film overly maudlin, it also proves truly awful in other ways. For example the script it works from turns regular human beings into animatronic meat sacks with dialogue so automated and plagiarized it's hard not to feel ripped off. Diana speaks like she justt won a beauty contest despite the world collapsing around her, the kids she never sees and the new man who is really a bit of a coward.

It’s hard not to feel for the woman but this is not that woman. Watts does her best with the caricature the script has provided but she makes do and comes out relatively well, especially considering her brilliant performance in The Impossible the same year. The story may be tragic and widely known but it didn’t justify this hatchet job

In the end the woman was a mystery, it’s part of her understated charm and the film not only fills in some of those holes with sickly sweet romanticism but it takes a little bit away from the whole ordeal.