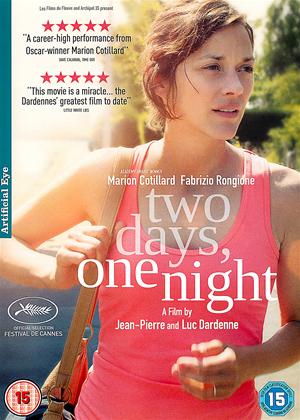 Not English - Two Days, One Night review by GL

Nowhere did anyone mention that the film was French with english subtitles, the film may have been good but when relaxing who wants to read.

3 out of 26 members found this review helpful.

I found this a fascinating and very credible film. Marian Cotillard's performance is absolutely excellent and the tensions and difficulties of reconciling the lure of more money with solidarity was very sensitively portrayed. The political message - of exploitation and bribery - was gently handled and happily the ending was very clever, Hollywood-like schmaltz completely avoided. A little masterpiece in my opinion and very French.

Lots of missed opportunities in the making of this film - Two Days, One Night review by CP Customer

The plot was very simple - can the heroine persuade enough of her co workers to change their minds about voting for her to be laid off so they could receive their bonus? But the story is actually about her journey in developing resilience to whatever life is throwing at her, with the help of her determined husband. Unfortunately a lot of that journey and of her coworkers reactions I found unbelievable, so I found I didn't engage with the characters, and didn't care what happened to them, I was just observing dispassionately. The husband was to me the best actor in the film, many of the other characters seemed wooden. And if they were all so hard up, why did they all have brand new cars, kids had laptops, everyone in new clothes? Just didn't add up, shame. The photography seemed to me more like news reportage. Lots of missed opportunities in the making of this film.

Plot sounds interesting. It's not.She sees someone, asks them to support her, things get emotional. Then she repeats this. Again. And again. And again. We stuck with it, certain there would be a twist, but there wasn't. Dull dull dull. Une perte de temps: a eviter.

Flat Social Drama - without the drama - Two Days, One Night review by AK

I've been wanting to see this for a while, after all the five-star hyperbolic reviews on its release, so it was a real let down to have to actually sit through it. Dull, repetitive and repetitive, it follows Marion Cotillard as a factory worker who, over the course of a weekend, has to persuade her work colleagues to vote, on Monday, to forego their bonuses and subsequently let her keep her job - because management have declared that they can't do both. And so we watch her plod from place to place, ring doorbells, recite a plot recap and receive one of two answers with little variation. And then go on again. It all feels as if it's happening in real time, and there's no visual flair, no imagination or creative spark behind it. The entire film feels as if it's purposefully been drained of any drama or cinematic language, and the end result is deeply enervating.

Good film. Scenario and characters credible in a nicely paced film. The difficult choice made by all the employees for reasons beyond their control made for a thought provoking watch.

it's in french get over it - Two Days, One Night review by DS

As many people have pointed out this film is not high paced or demanding. It's about a worker who has been off sick and who has already been fired. She must find the strength to ask her colleagues to agree to her return, and to lose their bonus in the process.

I found it engaging, and Cotillard's acting is superb - her weakness and vacillations at the journey she must take, make her a very irritating heroine. The interest develops as she confronts her colleagues in turn, and their reactions to her request, which range from immediate acceptance and great sympathy to outrage and physical violence. The resolution of the story is unexpected and redemptive. This is a gentle film, and seemingly one for those not expecting fireworks.

By the way - subtitles are essential if you are hard of hearing like my husband, even when films are in english

Dardennes do it again - Two Days, One Night review by MS

I've always liked the very distinctive Dardenne brothers' style, and here Marion Cotillard lifts the film with a wonderful performance as the downtrodden factory worker fighting to keep her job. I like all the little touches of humdrum domestic life - making a dessert for her children, straightening their room - while she is engaged in such a gripping task.

To me the interesting part is the variety of responses of her co-workers, from unconditional support to insincere apology to open hostility, when she goes to each to beg them to forego their bonus and vote for her to stay at her job. Since the actors are a variety of ages, sexes and races, it's a real cross-section.

My only complaint is that it's perhaps 20 minutes too long, but I still found myself thoroughly engaged, and the ending is not a predictable American-type one.

Marion Cotillard is a class act - Two Days, One Night review by PT

A ballot to except a payrise or sack Sandra (Cotillard) has voted for her to be sacked. Sandra and a work colleague see the boss, who agrees that they can hold another secret ballot. Sandra has the weekend to try and convince her fellow workers to vote for her to keep her job, thus sacrificing their payrise.

Her initial reaction is , I'm invisible, I don't exist, just let them decide Monday, I'm going to bed. Sandra has a history of depression, and she pops pills throughout like hippies smoking blow in Woodstock. With her husbands encouragement though she goes to see her fellow workers to try and get the mandate in her favour.

Cottilards unconfident depressive is superbly acted, understated but so prominent simultaneously. Also brilliantly acted is the slow and subtle changes, culminating in a healthier Sandra for her efforts. Marion Cottiard is one fine actor.

I'm with the 'dull'ards - Two Days, One Night review by DR

Obviously this film divides opinions and I can't help but side with those who found it rather dull and certainly repetitive. The story is a simple one, and the linearly shot interactions with her (Marion Cotillard's) fellow workers are 2-dimensional simply because we have no idea of the history of her relationships with any of them. Pointing a camera at a stressed-out Cotillard (or at the back of her neck) and following her around rather dull housing estates to knock on a few doors does not a fine film make. This is cinema verite that doesn't reveal any hidden truths.

An employment drama - Two Days, One Night review by DR

This is a distressing film to watch, where a wife and mother with a mortgage contribution to make is threatened with dismissal from her employment. She is in a vulnerable psychological state. Selected for dismissal for having a poor attendance record, she must petition her fellow workers to forego the pay increase which, it has been promised, will accompany her departure. She seems quite unfit to work or fight for her job, but her husband is clearly going to put some backbone into her or else they will have to return to social housing.

The film is in French, and appears to be sited in Belgium, where unless things have changed in employment law and trade unionism, none of this could happen. So the plot seems contrived, but designed to show a heartening development.

Let’s not fool ourselves, Two Days, One Night does not have the most interesting premise. However, it is surprising how engaging this film is. It has true meaning, it has good acting, and I give it three out of five stars.

The film follows Sandra (played by Marion Cotillard). After experiencing medical issues, she finds herself fired from her job. That is, unless she can convince the rest of the employees to forfeit their yearly bonuses, which will give the company enough money to keep her on. We are with Sandra for the weekend, and watch as she goes from one employee to another, pleading her case. Will greed give way to selflessness, or is Sandra out of luck?

This film is deceptive in its seeming simplicity. You won’t be on the edge of your seat, or hanging on their every word, but you will walk away and still find yourself thinking about it. Essentially, this film is about greed, how strongly humans cling to money above all else, but also how communities can grow together in times of need. While films that are made purely for entertainment are an important part of the industry, films like these that have a grander comment to make are vital. Not only is the story remarkable, but so was the acting.

It is hard to define it as ‘acting’ when it looked so realistic and genuine; it felt like you were watching a documentary. The dialogue - though translated from French - flowed smoothly. Marion Cotillard - known for both her French and American films - is definitely the best thing about this film. She dominates the film as a powerful, yet vulnerable, lead character. I am not familiar with any of the other actors in the film, but the vast majority of acclaim from assorted sources is directed toward Cotillard.

By not adding fancy effects, we were able to relate more with the characters and story. This is also achieved by the long - seven-minute - shots (of which there were often dozens of takes). Without constant cuts, we don’t feel led by the director, and feel more at-ease.

This is not the first work like this by the Belgium writers Jean-Pierre Dardenne and Luc Dardenne. They have a special skill for drawing us into everyday events, and giving us new ways to think about them.

Reviews from online and in-print critics, as well as audiences, have been overwhelmingly positive. While I agree it is a good film, I still find the hype to be over-the-top.

I would be surprised if this film got much recognition from international audiences, but I would recommend it to anyone. Do not get caught up in the film’s hype and five-star reviews, and instead just appreciate it for what it is.