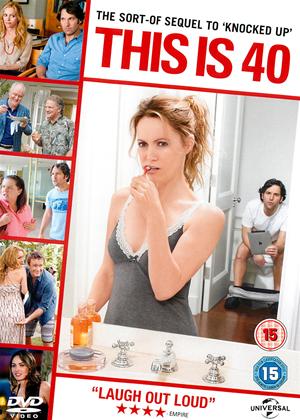 This movie is a series of rows between Paul Rudd and Leslie Mann and accompanying issues with family members various. I doubt this is how many people would like to spend an evening.

This Is 40 review by Alyse Garner - Cinema Paradiso

Set several years after the events of 2007’s Knocked Up Debbie, the older married sister in the first film, and her husband Pete are finding their own relationship is under strain; with economic, sexual, parental and familial problems at every turn the path to happiness seems somewhat too treacherous for the pair as they simultaneously approach the ominous “forty”.

Much like its predecessor This is 40 is another crass comedy from film maker Judd Apatow; who combines common denominator humour with thought personal exploration; often with the help of drug abusing social pariah’s as his key characters. Unfortunately for Apatow however, where Knocked Up managed to remain fresh and interesting, despite its somewhat obvious and formulaic narrative, This is 40 has less of the former and all of the latter.

This is not to say that it is a bad film, there is still plenty of humour it in, particularly if you like sex, drug and toilet humour, and there’s a handful of really great performances in there too. The problem is simply that the story has been done before, if not by some other Hollywood film maker then by reams of made-for-TV specials that air too heavily on the side of melodrama.

Apatow stays well away from this particular generic foible, but all the rest of the stereotypes are there and no amount of boy-humour is enough to hide that. I say boy humour because it very much is a film for young(ish) men (which are exactly what Knocked Up was before it); complete with technological references, sexual lamentations and Megan Fox in short skirts - think of it as a romantic comedy for the Y chromosome.

What prevents the film from just being a bit predictable and dull is its runtime, at more than two hours long the film could do with a serious edit, had this happened one can’t help but wonder if some of the less important and more unimaginative aspects of the story could have been left out also; perhaps leaving the film with a little more raw emotion to give an edge to that crass humour.