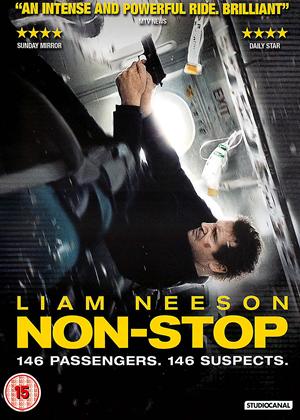 Synopsis:
U.S. Federal Air Marshall Bill Marks (Liam Neeson) is all washed up; a former cop struggling to deal with his violent past and wrought with self-doubt. On a routine flight from New York to London, he receives a threatening text message from an unknown caller ordering him to deposit $150 million into a secret account or a passenger will be killed every 20 minutes. It's now up to Marks to hunt down the culprit and save the passengers the only way he knows, with brute force. It's a race against time and a race against death as this frequent flyer is about to experience something far more explosive than mere turbulence.
Actors:
Liam Neeson, Julianne Moore, Scoot McNairy, Michelle Dockery, Nate Parker, Corey Stoll, Lupita Nyong'o, Omar Metwally, Jason Butler Harner, Linus Roache, Shea Whigham, Anson Mount, Quinn McColgan, Corey Hawkins, Frank Deal, Bar Paly, Edoardo Costa, Jon Abrahams, Amanda Quaid, Beth Dixon
Directors:
Jaume Collet-Serra
Producers:
Alex Heineman, Andrew Rona, Joel Silver
Voiced By:
O-T Fagbenle
Writers:
John W. Richardson, Christopher Roach
Studio:
StudioCanal
Genres:
Action & Adventure, Thrillers

I enjoyed this film thriller on board a plane with terrorists on board and a air marshall trying to save the day.Probably a lot of people will think its predictable but switch your brain off and enjoy it for what it is a good thriller.

This is the sort of movie the Brits just cannot make - a fast, thrilling ride of a tale, however unrealistic, about a US Marshall who gets a text on a plane then has to work out which passenger has sent it.

Great fun, all in all. Absurd plot, but who cares? I like the way this is just over 90 minutes too - not the long drawn out 120+ minutes of most Hollywood movies these days.

Liam Neeson fans will love this all action aeroplane journey.

Plenty of suspects to keep you guessing, including a few twists and turns along the way.

Fast moving action thriller with Liam Neeson being both tough yet vulnerable.

Enjoyed the 'who dunnit' and the many red herrings.

Fun guessing who was the guilty party-was it the pilot, stewardess or even the air marshall.

This was not one of the better films of liam neesons. Watchable and had a good plot twist nice to see actors from well known tv series downton abbey and i did not recognise anson mount from hell on wheels without his beard!

Not any edge of the seat nail biting action for me but passed the time.

Liam Neeson has a distinguished acting career, probably peaking with his leading role in Steven Spielberg's 'Schindler's List' in 1993. But from 2008 onwards he has re-invented himself as a (somewhat elderly) all action hero, first with his role in 'Taken' (and a couple of sequels), 'Unknown', 'The Grey', this film from 2014 - 'Non-Stop' and also from 2014, 'A Walk Among the Tombstones'. (I might have missed one or two - and I'm not counting the 'Batman etc' films).

This time round Liam's character is an ex-cop, an alcoholic, grieving for his daughter who died of leukaemia - but he's a US Federal Air Marshal this time, armed (of course), on board a British transatlantic airline flight (what?), with a planeload of suspicious passengers, one of whom is texting him threatening messages (what?). There's a bomb on board (of course) + two female-interest characters and a loveable child (of course). And (of course) good old Liam saves the day. Err that's it.

The 'female-interest characters' are played by the wooden Michelle Dockery (she from 'Downton Abbey') and the wooden-by-reason-of-botox Julianne Moore. Add to this more plot holes and technical stupidity than are sensible, the fact that Mr Neeson's passport shows him as 9 years younger than he is, very, very poor CGI effects and one wildly inappropriate use of the word 'wanker' by the pilot - and you may guess that I wasn't impressed.

If you want to watch a whodunnit set on a plane then close your eyes and let the plot holes pass you by and it might use up 100 minutes or so of your life. But if you're a thinking man, you'll definitely think that this is a flying turkey. Non-Stop? More like Non-Start :(

2/5 stars - but only because I have seen even worse.

If you love action and excitement and tension and twists and Liam Neeson and a director who knows how to mix 'em all and keep 'em fizzing watch this movie.

Why Liam why - Non-Stop review by HB

One of the worst Liam films I have seen. Why did he bother? He can't need the money. Always been a great fan from his early days. He can pick and choose and he chose this! Up to him, but so much more he could do.

When you mention the name Liam Neeson these days seems to suggest a kind of unconventional action hero, a buttoned up closed off man willing to do the dangerous things to save those important to him. While his Non Stop character doesn’t quite fill that role the film has many similarities to a similar aeronautical picture, the Jodie Foster starrer Flight Plan. The two put someone in the uncomfortable position of trying to protect people on a plane knowing little about the threat they face.

Non Stop follows US Air Marshall Bill Marks (Neeson) as he boards the flight from hell. When he gets on board he receives a message from an unknown source on his phone telling him that if he doesn’t get the airline to transfer 150 million dollars to an offshore account then he will kill everyone aboard the flight. While Marks tries to catch the culprit word starts to spread around the passengers that Marks might be the man behind it all.

While the film never really travels outside of what is comfortable and safe about action films it does an admirable job of bringing new life to a played out story and Neeson is clearly having fun playing the abrasive but admirable Marks. He is joined by Julianne Moore who is equally entertained by the film's sense of enjoyment and, most of all, entertainment. They both play into the films obvious charms and distract you from the glaring plot holes, silly side characters and unbelievable ending.

The film makes good use of its extremely limited space as the film takes place entirely on the plane as Marks attempts to solve the case. The film does dip into Bourne esque fighting towards the end dragging you out of the idea that this ordinary officer of the law can handle such a manic situation 40,000 feet in the air but overall its a wild romp through old school movie mystery elements and it does exactly what it is supposed to, entertain and make you forget real life for a few hours.