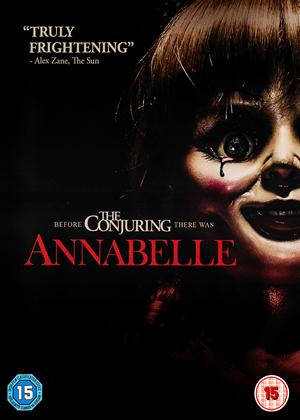 For some strange reason, dolls are apparently a scary horror icon. Other than the simple thrill of an inanimate object moving, I never saw the appeal. Dolls are small and have limited movement. You can kick them, you can stomp on them and easily run them over with a motor vehicle. The frights of Annabelle rely on the most simple methods of generating scares with a doll: the doll is one place and then in another. Not scary enough? Throw in some simple jump scares, creepy kid drawings and ghosts demanding souls.

Though the title doll first appeared in 2013’s The Conjuring, Annabelle is based on a real doll that is supposedly haunted by a seven-year-old girl (or a demon depending on which story you want to believe). The nurse who received her as a gift reported that doll moved on its own, would close doors and apparently attacked someone. The doll itself was Raggedy Ann, but that figure is swapped in the film for a seemingly creepier mix between a glass doll and a ventriloquist dummy. It may have also been done for some rights issues, but more likely because it would look silly seeing a Raggedy Ann doll attacking someone.

Taking place in 1969, one year before the events of The Conjuring, the doll in question is purchased by an expecting couple for their daughter’s room. But when a satanic cult burst into their house attacking them, their happy home comes under attack. One of the members is Annabelle Higgins, a crazy woman who dies with the new doll in arms. The cops arrive and shoot up the crazies, but the husband throws away the doll. After a mysterious fire in the house, the baby is born and they move to an apartment. Surprise, Annabelle came with them in the boxes. And from then on out the possessed doll taunts and mocks the stay-at-home mom with her new baby put in haunted jeopardy.

Most of these bits are the same old tired scares seen in countless poltergeist movies. Doors slam shut, ghostly figures wander hallways and unseen forces push and pull the unlucky mortals across the floor. The director even uses the oh-so-tiring stock sound effects of growling beasts for the invisible demons. Many of these attempts at horror are rather unintentionally hilarious as when a series of crayon drawings illustrate the couple’s baby being hit by a truck. It should be a dark warning, but the crude depiction shown in three progressive pages is too amateur not to be funny. Even the husband makes light of these illustrations.

To its credit there are one or two frights that are technically impressive. At one point a scary ghost girl lingers in another room, darts towards the helpless mother and transforms into a full grown woman upon bursting through the door. There is additionally an effective scene in which the mother is trapped in the basement with an elevator that refuses to budge. But these scenes are only impressive on a technical level and not for the intended frights. The rest of the movie is silly and cliche jump scares. The doll floats on its own, demons etch on the walls, books fall from a shelf near the baby like a classic cartoon bit and the satanist ghost keeps demanding a soul. Why does she need a soul? Not sure. How can you stop the demon? You can’t apparently. It needs a soul and you need to hand one over.

I’m also really tired of these horror movies using babies as victims. It’s such a cheap and despicable method to generate fear out of the audience. Hearing the baby cry behind a locked door. Images of a dead baby lying on the ground. Even if these weren’t amateur attempts at garnering shock from the audience, they still come off as a low point for horror. Has the horror market really become that vapid that we’ve transitioned from dead teenagers to dead kids to dead babies? Are fetuses next on the chopping block?

But something as dry and stock as Annabelle is not worthy of such an examination. Despite its rather large box office gross and the possible sequel potential, the end result is just another bland ghost romp. It even manages to fail at capitalizing on the creepy doll angle with no rotating heads, no following eyes and no sentient movements as the ghosts provide the floating. Annabelle is only scary in the fact that somebody holds up the fragile figure, puts it back in a house it was thrown from or makes it fall on the floor. If Child’s Play was a fully articulated doll of nightmares, Annabelle is a not-so-spooky sock puppet.