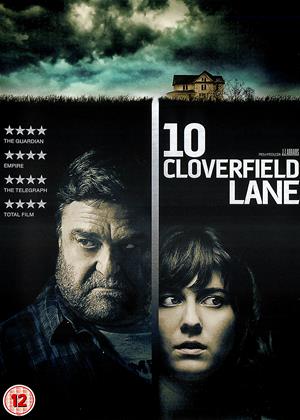 This is one of the most gripping thrillers I have seen in years, and I was as stunned and surprised as Michelle when she saw the truth outside the bunker! This is one of those rare movies where it is even more delicious when watching a second time. For the record, I've not seen the original Cloverfield, which may be why I was so surprised and shocked at the third act...

An intriguing plot and, for a claustrophobic bunker-piece, more visually inventive than you might expect. Dan Trachtenberg directs with verve and Mary Elizabeth Winstead makes a resourceful heroine. Is John Goodman her captor or saviour? The film can’t escape its origins as a low-budget three-hander called The Cellar but it does remain involving. Its biggest mistake is its title, which for film buffs is a spoiler that drains it of much of the tension. When you know the third act surprise, plot attempts to manipulate audience expectations make no sense. If you can ignore producer J. J. Abrams misguided attempt to make the film a ‘spiritual successor’ to Cloverfield, it stands on its own merits.

The first act setup is good. The second act has some nice twists and turns, despite some padding out with boring backstory reminiscences and even a laughable musical montage of everyday bunker life. There are no great dramatic highpoints, but the air of tension is maintained throughout and it remains involving. The third act is both sillier and more exciting. It does deliver to some extent, but J.J. has already hinted at what’s coming and fans of Cloverfield may well be disappointed.

Gripping but then gor bored - 10 Cloverfield Lane review by JJ

I was kept on the edge of my seat watching this not knowing what was true, what was not true in the plot. Wanted to know what was going to happen next, but why was it just so slow.. went on & on so slow... got boring then the ending disappointing :-(

This is a spin off from the film Cloverfield, they crash in a car and are kept safe inside this secure house made by the character played by John Goodman. They both start to disbelieve what he's telling them and want out.

Better than I expected. - 10 Cloverfield Lane review by CP Customer

Very good story line and kept me guessing! John Goodman and Winstead are great in it! Definitely recommend.

Quite a weird story line, but it does keep you on the edge of your seat. A few twists and turns along the way. John Goodman always good.

This film has got great reviews here and elsewhere. It does not deserve them. I can only assume the reason why so may critics praise it is the yawnsome cliche of a 'strong independent woman' #MeToo hero - that and the fact JJ Abrams produced it. That does not stop this being a boring B-Movie. One of the worst movies I have seen in the last few years.

They should have called this movie Milking It or Cashing In - because that is why it exists.

The third act is absurd. In fact, this movie has NOTHING to do with the original Cloverfield - which was a silly monster movie, but entertaining, at least. This is not. It is not even particularly tense for a thriller - it is predictable in every plot point and development.

Want a tense thriller? Watch Silence of the Lambs, Misery, The Secret in Their Eyes (original) or even Brit low budgent Cabin 28. Not this drivel.

John Goodman is good in his role and believable - unlike the cartoon character superhero main female character and the secondary male character- but he looks so ill. Maybe that was the effect of reading the script - but no doubt, he thought of the money and points he was getting and carried on...

Sometimes it’s a good thing when a spin-off veers wildly off course from its predecessor. 10 Cloverfield Lane is a perfect example as a spiritual continuance of 2008’s Cloverfield. While its predecessor was a giant monster movie shot in the found-footage format, this picture ditches that tired cinematography device and even the giant monster angle. 10 Cloverfield Lane is actually a genuine surprise of a film in that it’s a highly effective bottle movie built atop marquee value. Is it a shameless attempt to bank off a name in order to get butts in the seats. You bet, but those suckered into seeing this movie will not be disappointed.

Michelle (Mary Elizabeth Winstead) finds herself locked in some sort of basement after having been hit in a car crash. She fears the worst from her new environment and her presumed beefy captor, Howard (John Goodman). After her shock wears off, she is baffled to discover she is inside Howard’s fully furnished bunker. There is plenty of oxygen, food, water and electricity for an extended stay. And that’s exactly what Howard intends for both Michelle and his other roommate Emmet. Unlike Michelle, Emmet wanted to get inside after what he witnessed topside. Howard’s bunker may be the safest place to be during the mash of monsters above, but his paranoia makes him the worst person to bunk with.

The character of Howard is an endlessly infatuating character as the audience and the rest of the cast attempt to decipher what’s going through his head. Little of his past family life is divulged as he directs more of the conversation to maintaining the bunker. He’s the most dangerous person in the bunker, but only in that he doesn’t trust anyone. Howard has clearly been preparing for this day for a long time and doesn’t want to fall for the easy traps that will doom him. Michelle and Emmet slowly realize they don’t want to be here, but Howard won’t let them usurp him. The slightest glance of the eye or subtle hint of secret code between the two is quickly shot down by an exploding Howard. But when not in a constant state of panic and strategy for survival, he tries his best to awkwardly bring a calm to the situation. One minute he’s threatening to kill everybody in the room under threat of suspicion, the next he’s quietly offering up a spaghetti dinner. This is some of John Goodman’s best work in years as an unstable, anti-social and incredibly creepy hermit.

As you might have guessed from this review and the trailers, 90% of the movie takes place inside the bunker. This is a bottle movie for taking place in one location, but it’s also one of the most intense and engaging movies of this type I’ve seen in a long time. Michelle and Emmet are conflicted with where they should be in this situation. Do you risk being attacked by the monsters outside or play it safe with the monster inside the bunker? The tough call of how to proceed amid the cabin fever makes for a very compelling story that can hit multiple beats. One scene could feature the trio enjoying a calm night of puzzles and the next could feature Howard holding them at gunpoint.

Do we ever get to see what goes on with the monster attack outside the bunker? Yes, but once we leave the bunker in the remaining few minutes of the picture you’ll be wondering why you ever wanted to leave. The last act of this movie does feature an outdoor scene with battling the monster/alien threat and it’s not at all as gripping. The aliens and their starships are not all that interesting, appearing as amalgamations of every alien design from the past decade of movies. It’s easy to tell that this segment was tacked on for the Cloverfield tie-in considering how out-of-place it appears in comparison to the rest of the movie. The bunker scenes end so perfectly that you can actually shut off the movie by that point and be satisfied with the experience.

Despite such an awkwardly generic second ending, 10 Cloverfield Lane is easily one of the best movies I’ve seen of 2016. Real character development and thriller drama trumps over the sci-fi tie-in nature of this title. It is rather sad that in order for such a movie to receive attention it needs a marquee title, but that’s the world we live in. It’s original title was The Bunker which I doubt would have gained much attention. But if it has to shoehorn in an alien action scene for a more engaging and human picture, it’s a great bargain. You don’t see too many movies about an alien attack that focus more on the characters than the special effects.