Rent A Sun-Tribe Myth from the Bakumatsu Era (1957) 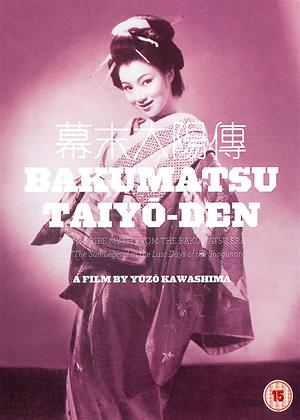 Sign up
Home from Home: Chronicle of a Vision

Reviews (1) of A Sun-Tribe Myth from the Bakumatsu Era

I'm someone who finds some Japanese directors very sympathetic, in particular Ozu and Kurosawa. (I don't quite 'get' Mizoguchi.) I think this is because their style is, mostly, self effacing (which is probably why I don't much enjoy Kurosawa's showier productions like 'Ran' or 'Throne of Blood' where the craft and style rather eclipses, for me, the significance of the story). I like stories of the ordinary, the everyday, the unexceptional that, under scrutiny, is illuminated and elevated to the status of exceptional.

So I'm now exploring directors who have not come to my attention before, and Kawashima is one of them. I enjoyed this film of his - a story about a man, a petty thief in the last days of the Shogunate when American and European interests are changing Japan irrevocably. The thief is a man skilled at living on his wits and he has a talent for technology being able to mend musical watches and make his own printing blocks and ink. He knows he has TB, and enters an 'inn' (brothel) in Shinagawa to enjoy himself mightily with some friends. He is, however, unable to pay and ends up paying off his debt by making himself indispensable to all the longterm employees, male and female, at the inn and thus earning tips. Finally, he runs off to find the European doctor who diagnosed him and to seek his assistance as his TB becomes worse.

Although the thief is at the heart of the film, carrying it along with his energetic zest for living, Kawashima enjoys developing his minor characters. There are prostitutes playing one client off against another, constantly looking for a man who will marry them so they have somewhere secure to go after they are no longer able to earn their keep; there are the grasping brothel owner and his wife, practised in the arts of tight-fistedness and exploitation; there is a gang of revolutionaries (though some of them see themselves as terrorists) planning to set fire to the Foreigners' Quarter; there are the several clients; there are three male servants who have known virtually nothing other than the brothel and who have no prospect of escaping it (including, intriguingly, a half-European one who is revealed to have been abandoned at the brothel by a prostitute long ago); and there's the owners' son, a drunk, who manages, with the hero-thief's help, to escape with the daughter of a carpenter who has sold her to the brothel because he is too poor to keep her.

I enjoyed this narrative immensely. It's pacy and full of intrigue, and in the second half the ingenuity and good-nature of the thief is compelling. Indeed, it is this good nature and joy in living that, for me, is the strength of the film. The man knows he is dying and is determined to extract from it every last scruple of pleasure and delight in his natural gifts that he can. Kawashima perhaps overplays the pathos towards the end as the narrative becomes increasingly punctuated with the thief's coughings, but the final episode abandons them as the dying man pulls off his final trick and makes his escape along the shore disappearing into the future? his death? his cure? - but certainly a future on his own terms.

I don't think the modern day opening was of much importance, though it may have more significance to a Japanese viewer. I think we are required to suspend our disbelief quite considerably at the gullibility of ssome of the male clients, but maybe it is not so unlikely if we consider they are, more often than not, drunk, and their judgments turned by the prospect of sex.