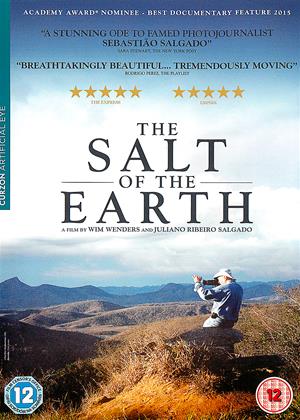 Synopsis:
For the last forty years acclaimed photographer Sebastiao Salgado has travelled the world, capturing moments that have defined humanity. He has witnessed and documented wars, famine, the mass exodus of people and even genocide. But now he is embarking on a new journey: to discover the grandiose landscapes and epic beauty of nature and encapsulate it in one sweeping photographic tribute to our planet's magnificence. Salgado's inspirational life and incredible body of work is revealed to us in this Oscar nominated by his son, Juliano, and world renowned filmmaker Wim Wenders. Powerful, affecting and truly profound, it is not just a portrait of a great artist but one of life itself.
Actors:
Sebastião Salgado, Hugo Barbier, Jacques Barthélémy, Lélia Wanick Salgado, Régis Muller, João Pessoa Mattos, Leny Wanick Mattos, Rodrigo Ribeiro Salgado, Maria Teresa Salgado Rocha Bastos
Directors:
Juliano Ribeiro Salgado, Wim Wenders
Producers:
David Rosier
Narrated By:
Wim Wenders, Juliano Ribeiro Salgado
Writers:
Wim Wenders, Juliano Ribeiro Salgado, David Rosier
Others:
David Rosier
Aka:
The Salt of the Earth: A Journey with Sebastião Salgado
Studio:
Artificial Eye Film Company Ltd.
Genres:
Documentary, Special Interest
Awards:

Rent other films like The Salt of the Earth

Reviews (1) of The Salt of the Earth

I think really the best thing to say is watch this, experience The Salt of the Earth. We watched it twice and later watched the special features. His photographs and this documentary - life changing. I have told my best friends to please watch.

An exhaustively profound, transcendental and life-changing experience – The Salt of The Earth is a celluloid homage to Brazilian-born social photographer Sebastião Salgado’s best work, vehemently beautiful at times, yet heart-wrenching and hard to look at, to an extent where a pessimistic worldview of humankind grows as the sincerest depiction of the savage nature of man. It is an excruciating, dark visual poem that becomes a modern work of art.

It’s directed by Wim Wenders and Sebastião Salgado’s son -- Juliano Ribeiro Salgado, who also serves as a narrator, explicating some of his father’s struggles throughout his life as a social photographer. A trained economist, but keen for adventure -- Sebastião quickly dismisses economics and focuses on photography instead, which becomes his lifelong passion and molds his character with the lenses of the camera. When he takes off to capture light against shadows – little did he knows that his work would change lives.

This is a very pessimistic film, with sprinkles of hope scattered here and there – very few and far in-between. One follows Salgado’s travels in the mines in Brazil, rural South America, Rwandan deserts, Bosnian refugee camps, Ethiopian famine camps, burnt Kuwaiti oil fields – it seems his lenses only tell stories of human suffering, death and destruction. The deeper the film goes – the harder it gets for watching – I personally covered the screen during some of the most graphic imagery captured by the Brazilian. It’s a hard experience, but rather a worthwhile one that begs the question: are humans the “most ferocious animals on Earth?”

Of course, Sebastião’s talents find beauty even in the horrors of life: this is a man who’s seen everything humankind has to offer, both good and bad, both selfish and righteous. Not even the messenger is sparred from life, as one finds that his second son is born with a down syndrome. Still, as he grows up, he develops his own communication that his parents and brother recognize – there is still a chance for redemption after all.

On contrary to the pessimistic, visceral nature of the film, Sebastião’s final work to date named ‘Genesis’ is a hopeful one; How is it that nature absent of humans is always beautiful on camera?

This is by all means a meta-biography, with director Wim Wenders going after the ontological aspect of the inception of filming, photographs and photographers. Not always when one films a man, the man films back. It’s not explored in-depth however, and justifiably so: the filming crew matters less than what’s shown in front of the lenses.

The Salt of the Earth is not a movie – it’s a profound experience that stays forever within oneself after witnessing such matters. It also serves as a reminder of the grotesque, paradoxical, mysterious, often times unrighteous side of human life.