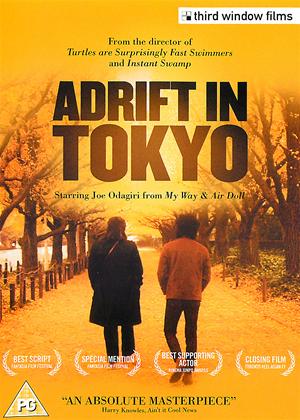 Synopsis:
Leading a lazy life, Fumiya has been a university student for 8 years and owes money to loan sharks. One day, a man named Fukuhara comes to collect the loan, which Fumiya cannot pay. So Fukuhara makes a proposition: He will cancel the debt as long as Fumiya agrees to walk with him across Tokyo to the police station of Kasumigaseki, where he intends to turn himself in for a crime he deeply regrets. Not having much choice, Fumiya accepts the deal. Thus begins their journey which will lead them to various unusual encounters, most of all with themselves.
Actors:
Joe Odagiri, Tomokazu Miura, Kyôko Koizumi, Yuriko Yoshitaka, Kumiko Asô, Eri Fuse, Kami Hiraiwa, Tomoko Hirata, Reona Hirota, Yoshizumi Ishihara, Mitsuko Ishii, Ryô Iwamatsu, Ittoku Kishibe, Yutaka Matsushige, Sanae Miyata
Directors:
Satoshi Miki
Producers:
Stylejam Geneon
Writers:
Yoshinaga Fujita, Satoshi Miki
Aka:
Tenten
Studio:
Third Window
Genres:
Comedy
Countries:
Japan, Comedy

Reviews (1) of Adrift in Tokyo

Adrift in Tokyo is a simple idea and certainly not an original story, think of Midnight Run and few other tales where two completely different characters are forced to share extended time together and from an initial beginning of fear or loathing their time together ends up with them respecting or even liking each other. If it is male/female, they often end up lovers. Opposites attract. All nonsense of course and in truth a weak premise. So, if you tell this oft-told tale you better have some strong glue to hold it all together.

It is the hairstyles folks; it is the hairstyles. Joe Odagiri sports a mad giant bedhead and Tomokazu Mirua a championship-winning mullet but in all seriousness these two are the glue that holds this simple story together. Fumiya is a shiftless loser, but he is much more that than an impression, Fukuhara is hired muscle, but he is more than that. This is the secret, make them one-dimensional and you are going to get bored very quickly, make them deliberately quirky and the viewer can get the feeling of being manipulated very quickly too. These two actors get the performances balanced right on the edge, for me it is perfect.

Dumped right in the middle of the story are three characters from Fukuhara’s wife’s place of work who spend scenes out of the main story concerned about her and looking for but get side-tracked. They are clearly the comic relief and although a little diverting, it does play into the story, although I am not saying why as this ruins the story for you. Ironically, they end up as extras in a film which is a reoccurring theme with some of the Japanese films I have watched recently. These little diversions could have ruined the story or been too jarring but here controlled by director, Satoshi Miki, they seem pitched well.

Throughout the trip points in each of the characters’ lives slowly revealed showing why they are as they are. Like all good road-trip, although this is a walking trip, we meet a collection of disparate and strange characters. Add all of these into the mix, some good acting, some fun, some sadness, and you have a great film. There must be some nuances or parts of the film that play to Japanese culture and being as ignorant as I am I would have missed them but overall if you a looking for – I hate this word in all honesty – a quirky, road trip, weird, sad and fun film which is greater than the sum of its parts I recommend Adrift in Tokyo. Of course, if you are never going to go to Tokyo, like me now unfortunately, this is a nice little trip around some real parts of that city.

Adrift in Tokyo is a film about a big city and the small things in the city. It is about regret, family, connecting with your emotions, the need for companionship and mayonnaise added to Japanese food that should not be added to Japanese food. Most of all though it is interesting and fun and that is no bad way to spend a few hours staring at a screen if you have to is it?