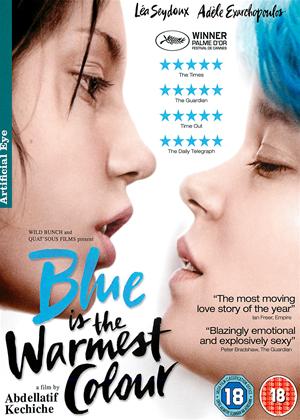 Reviews (2) of Blue Is the Warmest Colour

The French film industry produces some very good films and this one I found superb. The tale of a young girl maturing and having had a relationship with an older boy at school, she realizes something is missing, and is drawn into a beautiful relationship with a girl she meets. There are a lot of sex scenes without emotion as the critic review says, but the point is this is a young girl finding herself aroused in an unexpected way, and enjoying it. The emotional builds slowly.

I loved this film.

A passionate and powerful love story that charts sexual awakening, conflicts of desire and the heartbreak of a broken relationship. Whilst there is controversy in this film largely around its intense sex scenes this is also a film that garnered a lot of praise. Filmed in a realist style it follows Adèle (Adèle Exarchopoulos), a high school student who struggles with the peer pressure she receives from her friends to have sex with a guy who fancies her. She feels that something is missing in her life until she meets the confident and artistic Emma (Léa Seydoux) and they begin a passionate relationship. But as their lives become more entwined Adèle still struggles with being a part of Emma's life. Feelings of jealousy, shyness and inadequacy all contribute to a downward spiral. This is a film that really captures the reality of relationship struggles, ultimately it has a deep sadness in the story but also a strong sense of a journey of emotion that can only result in a rewarding life. The two leads are extremely good here and capture the intensity of their love along with the pain when things begin to go wrong. In many ways this is one of the best relationship dramas you'll see.

Having won the Palme D’Or at Cannes this year I had to see Blue is the Warmest Colour, even considering the controversy it had caused over its explicit sex scenes. Although it wasn’t at all what I was expecting, I’m pleased to say that Abdellatif Kechiche’s film is terrific as it gets to the core of a doomed relationship in a real and different way.

The film follows the life of Adele, a schoolgirl who finds herself attracted to a mysterious blue haired student named Emma. As Adele pursuits Emma she must also contend with her closeted nature as well as the prejudices that she can expect from people. However the two’s relationship proves just like any other and it may be a more ordinary problem that sees to their inevitable end.

Although a unique picture the film has trouble connecting on an emotional level, it lacks the kind of character moments that are expected of a relationship drama. Where a conventional film would build Adele and Emma’s relationship to a peak before watching it crumble, Kechiche chooses to mix the good with the bad. The films many explicit sex scenes also remove you from the experience as regular emotional beats are replaced with overly indulgent intercourse that lingers too long and never really feels necessary. In fact the film has almost 30 minutes of sex scenes, most of which prove emotionally stunted.

The film finds its footing on the back of lead actress Adèle Exarchopoulos who makes Adele an endlessly watchable person, both good and bad, vapid and intelligent. She gives a powerhouse performance that meshes brilliantly with Lea Seydoux’s Emma.

Ultimately a film about the way relationships share the same characteristics, even with different types of partners. The film gets great joy out of building this relationship in an honest and real way. Filled with clever dialogue, relatable characters and some gut wrenching final scenes, Blue is the Warmest Colour is a breath of fresh air.