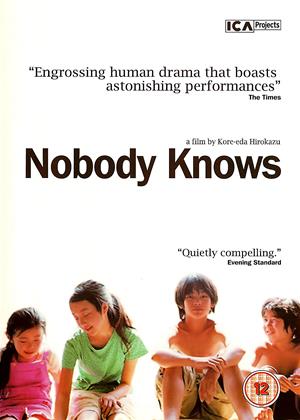 Reviews (4) of Nobody Knows

Both heartwarming and disturbing - Nobody Knows review by CP Customer

The story of 'Nobody Knows' revolves around four Tokyo siblings who are suddenly abandoned by their mother. Left to fend for themselves with only a little money and a vague hope that their mother may return, the film follows the children's struggle to survive on their own under the leadership of their 12 year old brother Akira. When the food and water run out, Akira pumps water from the local playground and shamelessly scrounges leftover sushi from a restaurant to feed him and his siblings, all the while daydreaming of baseball and school. As unbelievable as the plot sounds, the film succeeds because it is told in an incredibly believable way, and is shot in an almost 'fly on the wall' documentary style with a simple piano score. It also cleverly balances good and bad events which make the experience all the more real, and really highlights the children's spirit of survival. My only criticism is that there's no real ending to the story and although the lack of closure is mildly frustrating, it also leaves you with the impression that these four children are still out there, still doing whatever it takes to survive and stay together. If you like foreign film and don't mind slow paced stories then 'Nobody Knows' is well worth a look.

A true, all-time cimematic classic - Nobody Knows review by TE

Stunningly brilliant film. Koreeda here documents the true story of four siblings abandoned in a flat in a Tokyo suburb.

In fact, Koreeda chose to smooth over some of the harshest aspects of the story, though his film still delivers a powerful and tragic punch.

Koreeda's films all seem to focus on the nuances of family connection and the bonds of blood. In this case the bonds are exclusively felt by the children and not by the feckless adults.

The performances by the children are uniformly excellent, especially Yuya Yagira as Akira.

The disintegration of young, hopeful lives is set against the vast indifference of the city.

Please, don't do what I did. Don't waste more than two hours of your life watching this boring film! - Nobody Knows review by DW

The opening credits promised a fictionalised dramatisation loosely based on a true story: ok so far, I thought.

Too much was expected of the four children in the central roles: not surprisingly, they struggled to deliver but failed.

Those behind the camera elected to shoot in a pseudo-documentary format, intending perhaps to authenticate the fact that four siblings had indeed been abandoned in Tokyo by their mother. Watching overly long repeats of the same daily scenes from exactly the same camera position soon gets extremely tiresome. I like slow but if the "action" was any slower it would go into reverse.

Why did I hang on to the end? Because I hoped the closing credits would tell me what actually happened to these four children & their mother. Fat chance of that, not a word of explanation.

We have been watched several movies by Hirokazu Kor-eeda (written and directed) and these certainly show a magical touch in working with child actors - drawing wonderfully natural and convincing performances (are they professionals).

Nobody Cares, an earlier example, is a supremely powerful tale of child neglect and child survival - based around a real case (which was apparently more brutal than shown in this film).

At a length of two hours and twenty, the movie repays the viewer's attention (while easily winning our attention), as it tells its story (always a good narrative in Kor-eeda's films) in a magically cinematic way, through images and the gradual accumulation of images. It's really impressive and most of these films are impressive.

The story may reflect in some way the period of stagnation in Japan, and the comparative hardship faced in that society, as well as a particular case of eccentric fecklessness.

While it is tempting the judge the adult characters, or to believe that you know the best interests of the children, or to prescribe what should happen to them in the story, the movie creates instead a self-contained, self-sufficient world, which accumulates its own logic and morality.

There seems to be a theme in recent Japanese movies about the social and psychological condition of young people - the issues of happiness or neglect, or what constitutes a caring family or a sustaining life - to which Kor-eeda's work contributes very satisfyingly.,

In simple terms, a very involving and lovely film.