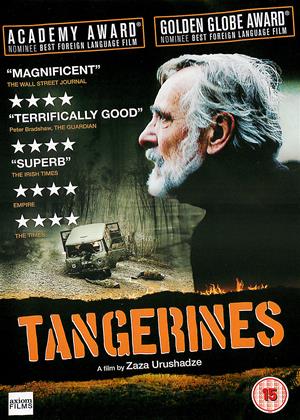 Synopsis:
Oscar and Golden Globe nominated for Best Foreign Language Film, "Tangerines" is a powerful and eloquent plea for peace and a poignant statement on the futility of violence stemming from racial and ethnic divisions. Set in 1992, during the growing conflict between Georgia and Abkhazian separatists in the wake of the Soviet Union's dissolution, this compassionate story focuses on two Estonian immigrant farmers who refuse to flee Georgia, staying on to harvest their tangerine crop. When the fighting arrives on his doorstep, Ivo treats two wounded soldiers from opposite sides.
During their extended period of convalescence under Ivo's roof, the enemies are forced not only to confront the reasons that fuel their hatred for each other, but also the conflict which rages around them.
Actors:
Lembit Ulfsak, Elmo Nüganen, Giorgi Nakashidze, Misha Meskhi, Raivo Trass, Zura Begalishvili, Dato Khakhidze, Jano Isoria, Gia Gogishvili, Vamekh Jangidze, Aleko Begalishvili, Temo Khutsishvili, Kakha Arevadze, Ann-Heliin Saadoja, George Tsaava
Directors:
Zaza Urushadze
Producers:
Ivo Felt
Writers:
Zaza Urushadze
Aka:
Mandariinid
Studio:
Axiom
Genres:
Action & Adventure, Drama
Countries:
Georgia, Action & Adventure, Drama

Very watchable - Tangerines review by BE

Clever little film around the dynamics between two opposing soldiers who gradually manage to put their conflict aside whilst living in the house of a pacifist. So beautifully acted, it's like being a fly on the wall in somebody's house.

The futility of war. How sworn enemies can become united by the example of a humane and humble man. A film for today and always.

A forgotten war in Georgia, two fruit farmers come between opposing Georgian and Russian (Chechen), Christian and Moslem fighters. There is shooting and despair but harmony finally comes to one conflict hardened soldier.

There are other films about how enemies thrown together have to come to terms with each other. This is the best for me. Highly recommended.

Tangerines postulates the quintessential conundrum of human-imposed morality, in which the underlying message doesn’t interfere with its gripping narration (or lack thereof) – using the war as a mere device to test the fragile nature of dichotomized perspectives and the inherent meaning of reciprocal human action.

The movie starts in a village in Abkhazia, where the lives of the natives are drastically changed by the infamous War of 1992. There’s barely anyone left, except Estonians Ivo and his friend Markus, in a way both denying their reality with actions that make little sense in such times – picking tangerines from trees. We see almost no real impact by the symbolic fruit, and coincidentally enough, the same is true for the ongoing war. Ivo and Markus however, patiently continue.

Then it happens: in front of their houses an armed conflict ensues, resulting in casualties and survivors. One of the survivors is a Chechen, the other – Georgian. Ivo takes both of them home and buries the unfortunate. What follows is tense, often times humorous battle of wits, histories and words, two truths that clash with one another, all the more dangerous when you know the stakes are as high as they can be in such circumstances of poetic vicissitudes of war.

While the conflict between the two soldiers unravels, Ivo is keeping things at bay: he doesn’t allow for weapons, physical fights or even bad intentions – he despises war and everything around it; he denies its presence and doesn’t believe in it; deep down however, he is afraid – not so for himself, rather for the unfortunate souls who are doing what he deems as unacceptable and cruel. This is Ivo’s only hubris – he disregards reality for higher ideal constructs, all while knowing that he is wrong. In the meantime Markus helps Ivo, and continues to pick tangerines like nothing ever happened.

Tangerines is full with joyful, bittersweet encounters, heartbreaking backstories and real human drama. It’s amusing and interesting in its own way, with both quiet moments and thunderous events, none shattering the consistency of writer Zaza Urushadze’s script, who also steps forth as the movie’s director. The accompanying meek sounds of a windpipe mirror the characters’ surroundings – a bleak, desolate village where interruptions are done only by machines made with intentions to end a human life. The cinematography is very well packed, with shots that reflect Ivo’s emotions and thoughts, and tangerines as the only contrasting colors in a landscape of certain gloom. The acting is nothing short of convincing and remarkable.

Finally, Tangerines has its flaws which can be easily swiped under the rug in favor of the bigger picture it’s trying to convey: humans are like tangerines – picking them apart in times of crisis does good to no one really.