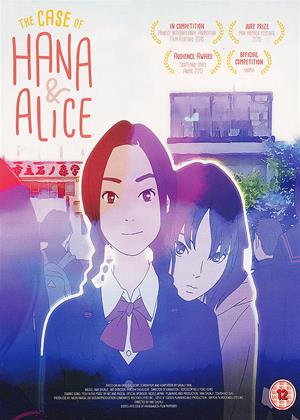 Synopsis:
Alice, a transfer student to Ishinomori Middle School, hears a strange rumour that one year ago, "Judas was killed by four other Judas" in Class 1. While investigating, Alice discovers that the only person who may know the truth, Alice's classmate Hana, lives next door to her in the "Flower House" that everyone is scared of...Eager to know more about the "Judas" murder, Alice sneaks into the Flower House to ask the reclusive Hana for more information about the Judas murder and why shes a recluse. The chance meeting of Hana and Alice sets them off on an adventure to solve the mystery of the "smallest murder in the world".
Directors:
Shunji Iwai
Producers:
Seiji Okuda
Voiced By:
Yû Aoi, Anne Suzuki, Shôko Aida, Sei Hiraizumi, Ryô Katsuji, Midoriko Kimura, Tae Kimura, Haru Kuroki, Ranran Suzuki
Writers:
Shunji Iwai
Aka:
Hana to Arisu satsujin jiken
Studio:
Anime Ltd
Genres:
Anime & Animation
Countries:
Japan, Anime & Animation

Rent other films like The Case of Hana and Alice

Reviews of The Case of Hana and Alice

The Case of Hana and Alice by director Shunji Iwai is a high school drama feature that again, overuses CG to an extent that makes its characters look stiff and lifeless. Nevertheless, the film enjoys its fair share of good storytelling that goes hand-in-hand with the best thrillers in said high school drama genre, and for this: The Case of Hana and Alice it’s worth for at least a viewing or two. Or perhaps three in total.

As Tetsuko Arisugawa (the voice of Yû Aoi) finds herself against a crossroad due to her parents’ separation, she must overcome her fears and desires in order to ‘blend in’ the new school she gets enrolled in. Soon thereafter, she finds out that a former student has been murdered and that now she takes his seat in the classroom. This shakes the very core of Tetsuko’s personality, after which she gets assigned the western nickname ‘Alice’ and continues her teenage trials in the new neighborhood.

The Case of Hana and Alice’s story is nothing we haven’t seen before, with some extra twists and turns added in there for good measure. One instance where Alice the film falters is when Hana (voiced by Anne Suzuki) shares her secret with Alice in a big moment of revelation that doesn’t work as well as director Shunji Iwai envisioned it to do. A superb moment ruined by excessive amounts of sentimentality which come dangerously close to become a melodramatic soap opera.

In continuation, we witness how intrinsic misunderstandings stall Alice’s growth – typical for a girl her age. What’s not typical however is the engagement in cult-like societies whose only intent is to brainwash its pupils into doing things way out of their comfort zone. Add to this a murder plot that makes Alice and her newly acquainted friend Hana question even the most basic doings of their school friends - and a mystery unravels like no other before the audiences’ eyes.

Soon, Alice can’t even believe her own eyes, let alone indulge in initiation rites as proposed by her friends. On the other hand, Alice is very much in love with the aesthetics of ballet and gives all in her power to persevere amidst all that’s going on around her teenage view of life. This helps her both grow as a person and realize her true potential which lay unused somewhere beneath her stoic persona.

Because revealing too much of one’s traits would give too much for enemies to latch onto, would it not?

The Case of Hana and Alice revolves around themes including love, friendship and dealing with grief. It also sprinkles some existentialism atop its final layer-cake and does is to with such precision to strike jealousy in the hearts of even the most hardcore haters. However, this doesn’t exclude the fact that the characters are modeled very stiffly and poorly and look as if their souls are sucked right out of their bodies.

The Case of Hana and Alice by Shunji Iwai gets a 3.