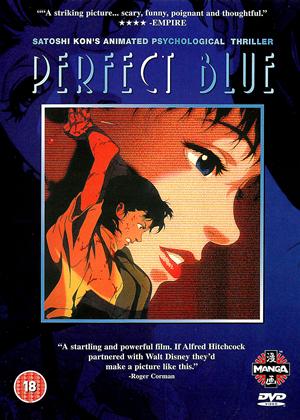 Synopsis:
Mima Kirigoe is one third of chart topping girl-pop group, Cham! But she is keen to put the childish career of the pop singer behind her and pursue her dream of becoming an actress. Her fans are sceptical however, and she quickly discovers that the transition is nowhere near as easy or enjoyable as she'd hoped... After getting a part in a very adult murder mystery drama, her life takes a turn for the sinister. She uncovers a blog detailing her life in intimate detail, and as a real life killer begins to attack the people around her, delusion and reality blend into one and she begins to question her own identity...
Directors:
Satoshi Kon
Producers:
Hiroaki Inoue, Haruyo Kanesaku, Masao Maruyama, Yutaka Maseba
Voiced By:
Junko Iwao, Rica Matsumoto, Shinpachi Tsuji, Masaaki Ôkura, Yôsuke Akimoto, Yoku Shioya, Hideyuki Hori, Emi Shinohara, Masashi Ebara, Kiyoyuki Yanada, Tôru Furusawa, Shiho Niiyama, Emiko Furukawa, Aya Hara, Shin'ichirô Miki, Jin Yamanoi, Megumi Tano, Takashi Nagasako, Akio Suyama, Osamu Hosoi
Writers:
Sadayuki Murai, Yoshikazu Takeuchi
Aka:
Pafekuto Buru
Studio:
Manga Entertainment
Genres:
Anime & Animation
Countries:
Japan

WARNING: Moderate spoilers, as well as discussion of rape, predatory behaviour, and violence.

Perfect Blue, Satoshi Kon's widely acclaimed directorial debut to animation, tells the story of Mima Kirigoe, a member (for the initial moments of the film, at least) of CHAM!, a Japanese pop idol trio. When Mima announces to the crowd of a farewell concert that she intends to quit her music career and pursue ambitions of becoming an actress, challenges mount, and it becomes clear that the transition will be more trying than she had initially anticipated. Pressures mount from a controlling fanbase unwilling to accept Mima's departure from pop music, as her former pop idol persona quite literally takes on a life of its own as the hallucinatory being, "The Real Mima", who wages a fight for Mima's identity. This culminates in the brutal murder of numerous individuals involved in Mima's shift to acting, as well as a steady decline in Mima's (and the audience's) ability to tell appearance from reality.

As should be clear from the plot outline, Perfect Blue offers a commentary on celebrity, and the toxic fandom that often corresponds to it. Broadly speaking, the film's story illustrates just how dangerous and terrifying life as a spectacle can be - how life built around a public face and persona is often met with unhealthy fixation from audiences, who refuse to let the objects of their admiration depart from the form they have come to cherish.

Yet there is more to Perfect Blue. The film explores these themes through a very specific examination of Japan's pop idol industry. The film highlights the oppressive expectations and norms under which J-pop idols work - norms that stress idols' purity, innocence, and naivety, and whose function is ultimately to keep the attention of a substantial adult male audience. (Hence why, despite multiple scenes of CHAM! concerts being included throughout Perfect Blue, one would be hard put to identify a single audience member who is both female and below the age of 16.) An image of purity is ultimately what Mima's fans refuse to let her abandon, a primary part of her emotional turmoil, upon performing a rape scene for her breakout TV drama "Double Bind", being humiliation and shame at the fact no one likes "a filthy woman".

Thus, underlying Perfect Blue's critique of the practices of Japan's idol industry is a broader interest in the exploitation of female celebrities for male audiences' voyeuristic pleasure. On this front, Kon and screenwriter Sadayuki Murai are barely any more forgiving of the TV and film industry Mima transfers to. Her rape scene is indicated to have been inserted into Double Bind by a screenwriter seeking to fulfil his own sexual fantasies, and, when the film closes out with Mima seemingly having regained control of her identity and matured out of her pop idol personality, one can't help but feel she's gone out of the frying pan and into the fire.

Overall, then, Perfect Blue is an intriguing work with great thematic depth. Yet a review of this film cannot fail to mention its most immediately striking quality, and that is the sheer mastery with which it is executed on a technical level. Suffice it to say that, two decades on, the animation of Perfect Blue remains utterly astounding, with the disorienting visual techniques used to blur the line between outward appearance and inner reality providing, to this day, a remarkable viewing experience.

If there are any spare criticisms I could throw against Perfect Blue (my score is rounded up from a four-and-a-half rating unavailable on this site), it would be that the complexity of the themes discussed above may merely indicate a lack of focus on the part of Kon and Murai. Disentangling what lessons the film can share was, even for a fan like myself, a difficult process.

All the same, I highly recommend overall that you watch Perfect Blue. And, important piece of advice: do so with *English subtitles*, not the English dub.