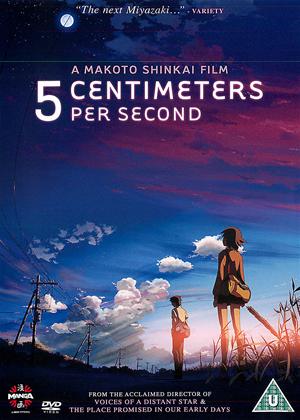 Reviews (2) of 5 Centimeters Per Second

Two teenagers a boy and a girl, strike up a heartfelt freindship at school, and although they both move hundreds of miles away to new schools, their love endures, or does it? Told in three parts, the first shows the characters at school together and on a visit to meet each other, the second involves another girl who has a crush on the male character ,and the third sees the two characters in adulthood years later.

The theme of the movie is distance and time and the title takes its name from the speed at which cherry blossom falls, ( popular tree in South East Asia), This is a wonderful, life affirming and gorgeous movie with indelible music, particularly the closing song. Watching it for the second time, it was not hard to see why its Director has become the new star of Japanese Anime.

There are three stories here that share the same theme of friendship/love and how distance and time affects relationships.

For me, the first story was the most beautiful and engaging, the second one was lovely but the third one was quite jarring in its narrative.

But I highly recommend this blu ray overall as a beautiful, sometimes satisfying and sometimes poignant experience filled with rich imagery, soul, charm and a narrative that flows with gentle poetic beats.

The English speaking version has lovely voice acting performances faithful to the film's intended ambience so if you prefer to enjoy the visuals fully without having to be distracted with reading subtitles, you will have a lovely experience with the English version. HOWEVER, there is one major problem with the English speaking version. There are no subtitles for the one or two substantial moments in which characters are reading text messages off their smartphone. Only in the Japanese speaking version do you see the text messages. So, in this respect, you might want to stick with Japanese all the way or if you watch the English speaking version then remember to rewind and switch to Japanese to read the smartphone messages. For animated movies, I personally prefer English speaking if voiced well and most of the time, they are, so that I can fully enjoy the character expressions and visuals but I tend to also repeat watch in Japanese because I absolutely love the harmony of Japanese voices, especially female Japanese voices but its at the sacrifice of having to read the subtitles, missing the nuances in the animation.

Director Makoto Shinkai made very similar short films before this, called The Place Promised in Our Early Days and Voices of a Distant Star. If you do seek that out on Cinema Pardiso, the two short films are combined under the title The Place Promised in Our Early Days/Voices of a Distant Star. Also another film by Makato that I recommend if you love these, is "Your Name" which was his most recent movie and is a full length feature.