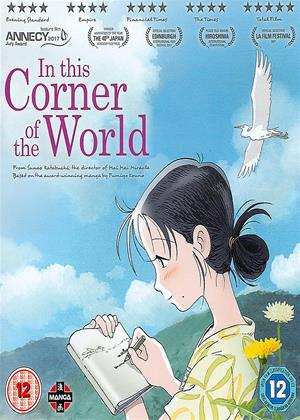 Rent other films like In This Corner of the World

Reviews (2) of In This Corner of the World

Struggle worth watching. - In This Corner of the World review by RP

For those of a certain age. Watching British films about ordinary life and family struggling against the chaos of war. Were pretty constant entertainment on a Sunday afternoon. Plucky Brits going through a hard time while sadness and disaster were only a breath away. It is refreshing to now watch films featuring the same plucky and stylised view coming from those who were placed on the other side of War and World. While the animation lacks the detail we are used to and the characters sometimes merge. The story and the hopeless struggle of a girl growing up in all senses of the word during the Second World War is always emotionally moving. The wonder and thrill of the expectation of War is always secondary to the struggle of just going through life. Until the War can no longer be viewed from a distance but is literally coming right at you.

From the innocence of drawing rabbits as breaking waves on the sea. To trying to fit into a new family. To watching the slow destruction of hope and Country. This is a film well worth watching. Not overly sentimental but sometimes almost too colourless. The need to endure to survive circumstances beyond your control is a powerful watch.

Brilliant film - In This Corner of the World review by CW

This film is spellbinding. It deals with the horrors of war in general and Hiroshima in particular through the eyes of a young woman. This sounds awful. and it is, but the animation and the illustration mesmerise you. Set aside a couple of peaceful hours to watch it.

Japanese animation has never been shy when it comes to the tragedy of war, especially with the firebombings and atomic bomb droppings in their own country. Barefoot Gen illustrated a grotesque depiction of how horrific the nuclear weapon was that charred flesh and Grave of the Fireflies is ones of the saddest movies of all-time for how a brother and sister withered in the wake of the firebombings. But In This Corner of the World stands out greatly for shifting the perspective from children to a new adult who is still trying to find her place in the world. One can only fathom how tough that must be when the world seems to be ending and friends and family are dying all around you.

Taking place in 1940s Japan, we follow Suzu, a young artist who finds herself just going with the flow so long as she can keep drawing. She loves to draw stories and landscapes, though the pushy military may interpret her sketching of warships as espionage. Suzu eventually decides to marry a boy and moves from Hiroshima to Kune. She’s a bit of an airhead with her imagination but everyone can see that sense of freeform life will slowly drain as she becomes better accustomed to marriage and doing her part for the war effort.

Going with the flow just seems to work for her. She stumbles into love and experiences all its joys and pains during wartime. But wartime never comes so simple for the passive as she slowly places more faith within the nation and others than herself. Doubt begins to cloud her judgment when the bombings become greater and those close to her family become lost in combat. Warships are downed, towns are lit aflame, and many family members perish. One death that occurs quickly and with little warning leads to Suzu constantly questioning if things had been different; what if she’d been walking on the other side and she was the one who took the blast? Part of her wishes she did as she finds little purpose in this world.

Unlike Barefoot Gen and Grave of the Fireflies, In This Corner of the World takes aim at the more mixed emotions of one damaged more mentally than physically during times of great crisis. While we still feel the brunt of explosions and the trials of rationing and raid drills, Suzu still views the world slightly differently. She remembers explosions as paint splotches in the sky and recounts events through vivid and sketchy drawings. Her imaginations sometimes bleed into reality as with scenes where her paintings seem to merge with the surroundings.

Director Sunao Katabuchi draws on a wealth of experience from a career that includes working on such vividly beautiful films as the magical Kiki’s Delivery Service and the sweetly biographical Mai Mai Miracle. He deserves on a film that feels very reflective of the era but still takes its time to stop and draw the flowers. I love how his characters always seem just a little bit exaggerated, the heads a little too big and the hands just a bit undefined. It gives the film a painterly quality that Katabuchi doesn’t shy away from dipping deep into for certain scenes.

In This Corner of the World ends on an exceptionally powerful where live goes on, much differently and with more hardship, but it pushes forward, where small amounts of food become pleasing banquets and the adoption of orphans brings new opportunities. Wonderfully artistic and seriously sad, it’s the perfect kind of film that drains the eyes but still brings warmth to its all-encompassing nature. Easily one of the greatest features of anime.