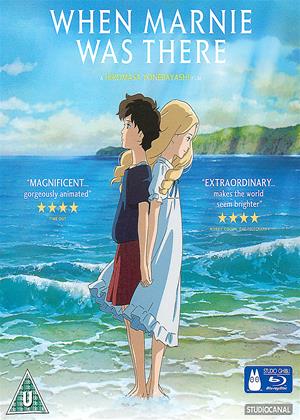 Reviews (5) of When Marnie Was There

WONDERFUL UPLIFTING ANIME TALE - When Marnie Was There review by GF

Wow, if this proves to be one of the swansongs from Studio Ghibli it is a worthwhile one. Based on a UK shorty story it has echoes of a Letter To Momo, bus very much its own film. It combines andinterlinks various themes such as loneliness, mystery, fantasy and identity in a moving and uplifting style that only Japaese anime can really manage.

Captivating Ghibli animation - When Marnie Was There review by Alphaville

Another beautifully hand-drawn pastoral animation from Studio Ghibli. Hollywood computer animation looks crass beside it. Shy 12yo Anna spends the summer at a seaside village where she befriends Marnie, but is Marnie real? It’s a slight but engaging story that manages to mix heartfelt emotion with other-worldliness. And the climactic revelation is a zinger.

There are moments when the animator’s artistry simply stops you in your tracks. The breaking of a wave, the billowing of a dress in a breeze, the play of light and shadow on a face. Some Ghibli output has focussed too much on monsters and creatures, but this tender human drama is almost as good as Only Yesterday.

The version with American voices is better than usual, but as always with Ghibli the original Japanese version is superior.

Wonderful children's movie. - When Marnie Was There review by TP

The whole family, age ranges 7-46yrs, all l absolutely loved this movie. Great story, wonderful ending. So nice to watch something that has a message instead of all the awful Disney movies that merge into one another. Couldn't fault it.

When Disney Was There - When Marnie Was There review by DF

I will go against the grain here in relation to previous reviews. I admit that I am not versed in Japanese style animation movies so this is my first example of the genre. Okay, the visual animation is superb and it was fascinating to watch the exquisite attention to natural details. Beyond that, however, I found the narrative of the movie both banal and tiresome and the characterisations somewhat bizarre. The movie does engage with the issue of a child dealing with alienation in a world where 'normal' family ties breakdown, but the movie's 'happy' ending developed through a context of either fantasy or dreams did, for me, stretch things quite a bit. The movie does show interesting elements of what I assume to be Japanese communal and cultural life (the village festival) but otherwise most of the characters seemed to be a mishmash of standard Disney stereotypes emphasised by the American accents. The adapted story line could serve any low budget 'family-friendly' straight to DVD type movie.

Only half Ghibli - When Marnie Was There review by AM

Like many people (I suspect) I associate Studio Ghibli with Miyazaki. I was hooked in by films like Spirited Away (genius), Princess Mononoke, Valley of the Wind, films which are beautifully made, telling original stories unlike any we see in western cinema - semi-fantastical, child-like yet with an underlying menace. When Marnie was There is a Studio Ghibli film, but directed by Yonebayashi. Like his previous film Arriety (based on the Borrowers), it is based on a short story from Western culture, and for me that means it loses half of the charm. It looks great, but the story seems familiar, and never fully threatening. Arriety had great fun playing with the ideas that every Borrowers film has, and the threat of being discovered put a tension in the film that I enjoyed and my children loved. When Marnie Was There lacks that. It's nice. I enjoyed it, but feel no need to see it again.

A masterpiece of atmosphere, immaculate pacing and a carefully crafted musical score - When Marnie Was There is a deep story filled with human emotions that will touch the hearts of many and leave no one to indifference for years to come. And to only say the score is great would be unfair for the people involved making it: the score is what really and truly stands out and accompanies the movie’s poignant visuals, which nonetheless are chiseled to near perfection.

Director Hiromasa Yonebayashi’s previous feature 'The Secret World of Arrietty' resulted in great amount of fame after its initial release gathered by its maker, thus propelling Hiromasa onto the scene of contemporary Japanese animation as one of the most promising Japanese directors today. This resulted in his next work and studio Ghibli partnership in order to produce When Marnie Was There – a heartwarming coming-of-age tale told via the perspective of characters Anna and Marnie – two girls who may or may not exist in the real world.

As events unravel, we get a nostalgic hint at some older Miyazaki works that mimic or mirror When Marnie Was There’s relationship between two given girls. But unlike My Neighbour Totoro which followed two sisters within their daily activities, When Marnie Was There presents this relationship far deeper than everything we have seen from the Japanese animation studio before. And it just feels more real and plays livelier than a simple character’s arc from adolescence to adulthood which is an annoyingly common occurrence these days within the movie-making industry.

And the complexity of When Marnie Was There is no mere coincidence given the fact that it’s based on Joan G. Robinson’s intrepid novel of the same name.

The story is realized through different twists and turns that give the audience enough thrill, which, backed by the impeccable suspense all throughout its running time, will keep moviegoers involved until the very end. And boy does the end deliver in all its tear-jerking glory: when you happen to care and root about fictional characters trying to realize their goal and find out their true identity into a non-forgiving world – then you’ve just found yourself a winner ladies and gents.

When it comes to cinematography, I’m especially generous at hand-drawn animation for the simple fact that everything, from shadows to light to the slightest of details, has to be done manually. Sure, When Marnie Was There combines techniques flawlessly and seamlessly without it interfering into the story. Notice how I use the noun ‘story’ over and over again. This should be a hint to what exactly you should focus your attention onto. Thank me later.