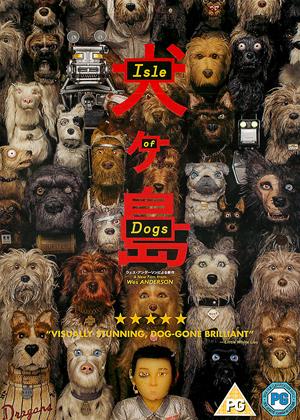 Reviews (7) of Isle of Dogs

Loved this movie so much I will buy my own copy!!

The stop-go animation was so touching...the fur of the dogs and the shine in their eyes at moments of sadness....the marvellous actors' whose voice talents were so wisely chosen and the story that was impressive...needless to say I love this movie!!

Paws for Thought - Isle of Dogs review by JD

This movie is clever, funny and tells a very interesting story.

The voice acting is superb, and the lead dogs have great characters.

Not normally a fan of adult animated movies but this one is special and I can highly recommend it for a good evenings entertainment.

Don't be fooled by all the good ratings and reviews, they must be mainly from fanboys/girls of the director!

This could have been good because the basic story is an interesting one, I won't go into details about that because there is no point in that as I don't consider the film itself worth wasting your time on.

The animation is very weird and disappointing by modern standards and the direction is all over the place. There is a terrible propensity nowadays for almost all films and TV shows to keep flitting back and forth through time, using flashbacks, different realities and alternative dimensions and it's something I absolutely hate. Because of that it seems that everyone has to do it to some extent and that is the case here also when there is absolutely no need for it.

To give you the best idea of how good this film is let me close by saying that my wife fell asleep and missed the second half of it and I nodded off myself a couple of times too. That is something I never do when watching films or TV so that tells you everything you need to know about this film.

I hated this and have NO idea how anyone can give it 4 or 5 stars.

To be honest, I have hated all Wes Anderson movies I have seen. I have no idea what people see in them. They are dreadful! I just do not get it.

I turned this off half way through. It's a weird and boring Japanese-set animation - not pretty at all. No fun. Not profound though no doubt it thinks it is. Maybe inspired by Japanese Manga animation and comics which hold NO interest for me.

One star, if that.

There are so many lovely animal animations out there. Watch the original 101 DALMATIANS if you like dogs, Not this barking twaddle.

Ok, but not grabbing - Isle of Dogs review by AL

Love stop animation and the animation on this is sublime. Wanted to see this as I know one of the animators and I wasn't disappointed. However the film it's self didn't grab me or the children's interest, which was a shame. They got bored and confused, so we had to finish it early, shame.

A delight; very much a one-off. An interesting story/plot and attractive on the eye. Maybe not enough gormless glitter and daftness for kids but as an adult I loved it. Do we have to have Johansson again? Her voice is drab (listen to her performance as the snake in Jungle Book) surely there are better actresses and voice actors out there (having said that this wasn't a challenge)? The magic is in the skill of the animators and direction; well done all!

Wes Anderson’s Isle of Dogs is the type of animated film I dream of seeing in the 21st century. Along the same lines of Fantastic Planet and Watership Down, it’s a weirdly intoxicating dose of imagination both dark and beautiful, never settling on a concrete audience of kids or adults. I suppose with its oddly amusing designs and clever parable, it could be considered a film for older kids. But, honestly, the adults, especially those with a love of classic Japanese cinema, are going to get the most out of this production.

As with the best of animated films, Isle of Dogs takes us to a world that is familiar and yet unworldly by design. In a futuristic Japan, or about as futuristic as a 1960s society could imagine progression, dogs have been removed from society for their disease, cast away to a remote garbage island to live out their days. It sounds like a dark premise but perfectly suited for Wes Anderson’s naturally intoxicating blend of wicked humor. One of the first scenes on the island features two rival gangs fighting for food but breaking the tension for a moment to examine the contents and debate if a deadly battle for survival is worth it.

The top dogs of the island, or at least the most vocal in the English-translated language of dog, is a pack led by the dirty and dangerous Chief (Bryan Cranston). His leadership keeps his quirky collective alive, voiced by Anderson regulars of Edward Norton, Bob Balaban, Bill Murray, and Jeff Goldblum. He’s exceptionally distrusting of the visiting boy Atari (Koyu Rankin), traveling to the island to find his lost dog. Despite an impressive amount of tech from Atari, skilled enough to build his own rickety plane to make the trek across the water, he relies on the help of the dogs who cannot fully understand him; “I wish someone could speak his language,” as one dog remarks.

Its this intricacy of Anderson’s world that makes it the most wondrous worlds of his movies. Dogs have been translated into English, but the Japanese citizens are all speaking Japanese, including Atari. An American foreign exchange student Tracy (Greta Gerwig) and an English interpreter (Frances McDormand) fill out the human English roles. While this version of Japan seems trapped in the past with its massive reels and wood paneling, it also boasts robotic dogs and a human-to-dog translation device. What a weird dystopia.

As with all of Anderson’s productions, the cinematography is a triumph. Watch how the first act pays great homage in staging, lighting, and even the music to match the endless inspiration of Akira Kurosawa’s The Seven Samurai. There are plenty of other wonderful nuggets of Japanese cinema woven into the animation; one element I found curious was the background radio music of Teruko Akatsuki’s “Tokyo Shoe Shine Boy” which may or may not have been inspired by its use in Katsuhiro Otomo’s AKIRA. Breathing further life into the animation is the rustic charm of its simplified techniques Anderson perfected with Fantastic Mr. Fox. The dogs move with a bit of a jerky movement to their fur and fight scenes kick up clouds of dust made possible by cotton.

Isle of Dogs is so genuinely original that I doubt most modern audiences would scoff at its closer comparisons of Plague Dogs and The Secret of NIMH. Anderson has defined his own style of stop-motion animation that establishes itself distinctly from the likes of the slicker the Laika studio and the more pudgy clay of the Aardman studio. The writing and acting are spot-on, hitting that sweet spot between dark cynicism and sweet humanity amid gorgeously dystopian backgrounds. Of course, being an animated film, some parents may be asking if it’s suitable for the kids. Personally, I believe the film to be perfectly tailored to the kids reaching into their teen years that believe animation has nothing left to offer them. Anderson proves that animation can be far more intelligent, beautiful, and biting than the usual crop of musical silliness and manic action.