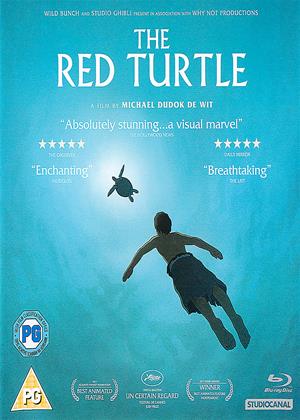 Reviews (5) of The Red Turtle

Another gorgeous hand-drawn animation from Studio Ghibli, this time from a Dutch director (Michael Dudok de Wit) who understands the medium as Miyazaki did. You’ll never be satisfied with computer-based animation again. It’s about a man shipwrecked on a desert island. Don’t worry that the title makes it seem like a children’s film. The turtle makes only a brief appearance and is merely a plot catalyst. The film is full of adult themes and moving moments, but AVOID THE TELL-ALL TRAILER, which ridiculously condenses the whole 77-minute story into 2 minutes and spoils the several story twists. Why do they do that?

The sets are wonderfully scenic and colourful, with an exceptional quality of light rarely seen in animation. The director also stretches the medium to its fullest, using all kinds of pseudo-camera angles and shots that would not be possible in live-action. In short, it’s a stunning cinematic watch. The DVD also has a fascinating feature that shows the

Artistic, certainly. Exciting, no. - The Red Turtle review by MG

Wow, this really stunk. Major problem is that even though it has a short running time it is still an hour or so too long. In my opinion this would have been better as a short 20-30 min film, a curiosity with some artistic merit but nothing more. Baffling and at times quite boring. Really disappointed in it. Should have rented 'The Secret Life of Pets' instead!

This is an odd one. I though it would be a simple fairy story - and I suppose it was but it involved fantasy elements and was baffling, confusing and what was the point of the story exactly? It was like the Blue Lagoon with turtles and magic. Hmmm.

Maybe it was based on some folk tale known in Japan or something? I'd love to know!

But lovely animation for sure - and beautiful music.

Strange but it seems overlong at just over an hour.

Why this was made into a movie, I have no idea. It'd work far batter as a short film.

Beautiful but obtuse - The Red Turtle review by OtakuFeebs

I am a massive Studio Ghibli fan and was really looking forward to watching this film. However, this is not really a Ghibli film, other than it is beautifully animated by the studio. To explain that statement, this film lacks the whimsical magic of a Ghibli film (even Grave of the Fireflies has it's moments). Michaël Dudok de Wit is a completely different sort of director, he's not someone I'm familiar with and I won't be seeking out his work again.

It's all a matter of opinion of course but I found the film hugely unsatisfying. I couldn't relax watching it as I was constantly trying to understand it's meaning. When I finally gave up caring I actually fell asleep which is something I very rarely do whilst watching films. If you enjoy obtuse experiences this might well be a film for you.

Not What I Was Expecting. In a Bad Way. - The Red Turtle review by Mehitabel

I loved the first forty minutes of this film. The animation is like nothing I've seen before, with a bewitching half-naturalistic, half-impressionistic feel. And the story seemed to be taking us into the land of fable. I was eagerly waiting for the moral, expecting - and hoping - for it to be a tale about the need for humans to live alongside, respect, and try to understand the natural world...

Then, plimp! - It's just another ho-hum human-orientated love story (and that gives nothing away, plot-wise), but with good drawing.

It raised so many questions, none of which I can really mention and still avoid spoilers. Other than: The crabs. Cute and funny, or weird and malevolent? And I was left wondering: What on earth was it trying to tell us? Other than: Read the weather forecast carefully before putting out onto the open ocean in a small boat.

Also, there were some continuity issues which irritated me: In one frame, he has something in his hand. In the next, it's gone. That sorta thing. And too much is asked of our suspension of disbelief. I get that we don't want frame after frame of him making rope from leaves, or whatever. But when the rope he uses on the raft looks exactly like hemp, and he's produced it before he's even grown a full beard........... Again, a distraction.

I was so excited to see this film. But in the end, so disappointed.