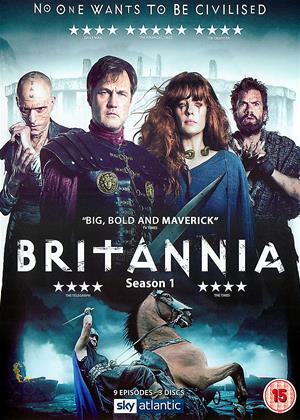 Not for the History buff - Britannia: Series 1 review by SC

Entertaining enough Druid and sword fest. Not a patch on Game of Thrones or Lord of the Rings of course but not bad for a Sky production. Not to be taken as in any way historically accurate, The Romans and Britons constantly try to Parle, which of course comes from the french, and was used in a military sense about 18th Century and really sticks out in a series set in AD 43! The druids didn't do weird sacrifices around stone henge, in fact the whole things is full of historical nonsense and the story is a bit silly, but the acting is mostly good and the special effects are ok for a tv series. There are much better things on telly, but as historical series go, its not bad. I do wonder why bother making a historically set series and then not actually researching any of the history though. It might as well be set in Westeros for all its factual content.

OK so here's the thing, do NOT in any way think this portrays reality, or real early British history, or the reality of what women and men did in Early British tribes - this is a massive pc fantasy, a sort of Iron Age Wonder Woman, with so many 'strong and confident' women behaving like men in roles men would have filled, not usually women, who would have been back the huts having babies, caring for kids and doing domestic tasks. BUT the pc BBC's Bodyguard and most TV drama is equally absurd on this sexist virtue-signalling level these days too, and as for Hollywood metoo movies...

The technique of using a girl character (who is aggressive, confident, rude and swears) is a big misfire. In fact all women characters here are straight out of a 21st century metoo meeting - no woman then or even 50 years ago would have been so mouthy, aggressive, pushy, forceful BUT NOW that is a new stereotype and every movie and TV drama simply must have its sassy 'strong' women. Yawn.

The Druids trained up BOYS only, actually, AND were not the weirdos portrayed here, but priests and also they controlled trade - why the Romans massacred 30,000 of em in Wales (Anglesey/Mon) because they controlled the gold trade. The Romans came to Britain itself as it was rich, prosperous and PEACEFUL - with gold, tin, lead, iron, freshwater pearls AND fertile land to grow grain to feed the Roman army. That is historical fact. This is less historically accurate than Star Trek. AND REMEMBER TOO the English language did not exist until 600AD approx. and England is named after it; these people would have spoken BRYTHONIC (early Welsh really).

There are also of course black characters in main roles, despite no evidence for that in any Roman history of Britain, though Roman soliders did come from everywhere (but not Jamaica...). This therefore looks like the new diverse series of Midsomer Murders and about as realistic a portrayal of the British countryside. If this had been made 20+ years ago without all the pc metoo diversity worship and ethnic quotas, and shoehorning of issues, it would have been better. Think Lawrence of Arabia (NO women in that movie AT ALL).

It's also filled with lots of mystic nonsense. But that is done way better in DA VINCI'S DEMONS and Roman life portrayed far better in old BBC2 TV series ROME (also HBO I think?). That was much more entertaining with better fight scenes too.

The directing is rather plodding. Some dialogue and scenes are laugh-out-loud unintentionally funny!

Moderately entertaining and amusing in parts, but in the 2nd division. 2 stars.

Too much language for me - Britannia: Series 1 review by Ken

Started watching the first episode but there were three instances of the "F" word before even the opening credits started, so be warned. I don't want to listen to such language so sent it back and cancelled the other discs. Shame, might have been entertaining.