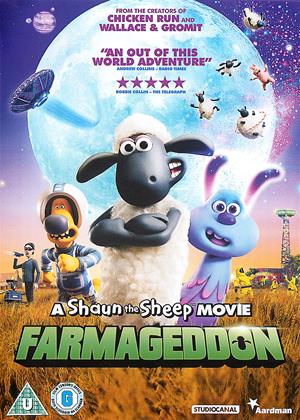 Rent other films like A Shaun the Sheep Movie: Farmageddon

Reviews (5) of A Shaun the Sheep Movie: Farmageddon

Not up to standard in my view. - A Shaun the Sheep Movie: Farmageddon review by HH

I much preferred the previous films, especially Wererabbit. I enjoyed this but found my mind wandering a few times. I think this movie is more for children than the others were

Actually quite entertaining film. Can watch it with the kids without getting bored. Clever characters. Bit more PC slick than the early Wrong Trousers etc, but gets away with it, as retains some of the imagination from those ground breakers.

I have loved all the Wallace and Grommit films and everything Shaun the Sheep so far but I just couldn’t get into this. I persevered trying to understand the storyline but just couldn’t and at the end thought “what a load of rubbish that was”. Don’t bother.

The usual fare - A Shaun the Sheep Movie: Farmageddon review by BE

A charming, funny animation. Just what you'd expect from the makers. Probably great for kids, but we loved it as grown-ups. The animation is awesome, as are the characterisations. Lovely. Highly recommended.

I think what’s most remarkable about Aardman’s new flagship series of Shaun the Sheep is that it’s a testament to how well strong animation and direction can make even the most tiresome plots seem fun and inviting. The Shaun the Sheep Movie from 2015 wasn’t a particularly original idea for a picture, with Shaun and his sheep pals venturing into the big city to find their missing farmer stricken with memory loss, but it ended being overtly charming in its dialogue-free fun. You don’t need dialogue with visual gags this strong.

Farmageddon proves that even if the formula may get a bit stock, it still works and is still just as fun even with a more stock story. In this adventure, Shaun discovers that his farm has a new visitor, the alien creature who identifies as Lu-La. Lu-La, appearing like a cross between a dog and an octopus, possess the powers of levitation, moving objects with her mind and copying all manner of voice and sounds with her mouth. As Shaun gets to know Lu-La, he soon discovers that she is a mere child who crashlanded on Earth and wants to find her way back to her parents in a galaxy far away.

But that may be a hard task to accomplish. For Lu-La, she must evade the capture of a secret agent who has scoped out the UFO and is holding it for observation. For Shaun, he must keep the alien a secret from the nosey authoritarian sheepdog Blitzer, aiming to keep the farm civil and controlled without sheep trouble. The farmer is no issue considering when he learns of a UFO in his area, he’s more keen to set up a tourist trap than worry about what the sheep may be up to.

The formula of Shaun the Sheep continues to be a great example of bridging generations. The mostly-babble script that relies on slapstick will be easy enough for younger kids to dig. But the adults won’t be left out in the cold as there are numerous sci-fi references that are very cleverly woven into the comedy. In one scene, Lu-La rubs up on the wool of the biggest sheep of the farm and becomes lost within the inner fluffiness. She soon emerges in a staging that harkens to Ridley Scott’s Alien, where John Hurt becomes the victim of a xenomorph that bursts from his chest. That film was horrifying but such a bursting from wool in this film treats it as cute and funny, the soundtrack making this more clear. Kids will find such a scene adorable while adults will get a laugh that such a reference is given a different tone.

It’s when some of the references become a bit more blatant that a bit of the creativity feels a bit lost. There’s a scene in the kitchen that draws too much from 2001: A Space Odyssey that I’m uncertain how much humor the younger crowd will get from such a scene. There’s also an over-the-head moment for the kids when the antagonist secret agent uses the literal X-Files theme song as a passcode. Perhaps I’m looking too much into this but when an animated film such as this can find clever uses of Alien and ET past mere references, these lesser examples kinda stick out like sore thumbs.

Of course, this is just from the perspective of an adult. Kids, I have no doubt, will dig the slapstick of such a film. One of the funniest sequences features Shaun and Lu-La inside a grocery store, where Lu-La discovers all sorts of food. Of course, once Lu-La discovers sugar, the store turns into a chaotic mess, albeit with some great gags. The little details make this scene shine, as when a woman’s high hair is cut off, revealing a 50% off the sign behind her. But doesn’t it seem a little easy to showcase how sugar makes a youthful character go crazy in animation? Haven’t we seen that enough?

My major hangups with this Shaun the Sheep movie are mostly going to be boring adult nitpicks and I’m sure a few cynical parents will make similar criticisms. Looking at this more from the perspective of a kid and as the parent of a child, I can firmly say that this film is knowing enough to play to its demographic while not alienating the older crop of animation lovers. Aardman always delivers on the sincere and detailed when it comes their claymation features and once more deliver it with Shaun, proving this sheep has all the right stuff to be as prolific as Wallace and Gromit.