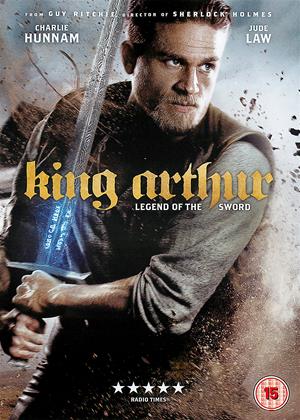 Reviews (18) of King Arthur: Legend of the Sword

Well you either like Guy Ritchie films or you don't. I thought that this was great fun full of action and didn't expect it to be traditional which is probably why I enjoyed it so much!

Rubbish - King Arthur: Legend of the Sword review by RH

Could only watch 15 mins

A waste of 175 million dollars (criminal waste of money)

Guy Richie as usual up his own ***e

How do these things get a green light ? - King Arthur: Legend of the Sword review by GB

It's become obvious to anyone except the "lads" of "geezerville" that Guy Ritchie shot his bolt with his first 2 films. Lock Stock and Snatch were fine, genre rousing British gangster movies. Sadly, his output since can be best described a "sporadic" at best. This film is without a doubt his worst misguided attempt. He tries to bring something new to the "Arthurian Legend" and ends up with a confusing mish mash of geezers, fantasy, legends and CGI overloads that frankly you sit wondering who approved this stuff ? Even if you suspend your disbelief long enough it's still a dreadful movie. Charlie Hunham, Aidan GIllen and Jude Law are usually dependable actors, but here they flounder with dreadful screenwriting and a soundtrack that can't decide whether it's rock music or classical. A word of warning - Any King Arthur film that starts with 200ft elephants on screen in the first minute tells you all you need to know about the next 2 hours. I will save you my pain and advise you to give up at this point and go and watch some paint dry, it will undoubtedly be more enjoyable than this drivel !

Guy gets bored, so likes to do something different. Got involved with comp graphics with Sherlock, so now gone for broke with Camelot, trying to get a "result", as quoted in the film at one point!

Rockanrolla films all about dialogue and acting. London backing, which he can control through knowledge. Anyone can do graphics. Potter/Rings/Marvels.........getting quite boring now. May as well just put comp games system on screen.

Directors mesmerised with the blue screens and special graphic suits...........get back to clever camera shots, and acting. Decent looped up story etc! Apparently they cannot do it anymore? The actors get lost amongst all the childish colours and explosions...........

Not as bad as you would think - King Arthur: Legend of the Sword review by SR

I remember it got a bit of a mauling when it came out at the cinemas.

However that seems a bit harsh. Its not going to win many awards. However it was a fun magical throwback. I enjoyed it.

Proactive - King Arthur: Legend of the Sword review by KO

Oh dear what a disappointment. King Arthur and the cockney geezers ... havin' it large my son, might have been a more appropriate title.

Pretty sure PROACTIVE was not used in the vocabulary at Camelot. In days of old when knights were bold and apparently proactive. mmm

Shame I had high hopes for this film. Not one of Guy Ritchies best.

I am in 2 minds about this reboot - it's sort of Lock, Stock and 2 Smoking Barrels + King Arthur, a baddie king, some monsters, snakes etc, some fit birds, and some blood and guts, and loads of multiculti Cockney geezers. Oh and loads of CGI.

It starts terribly - for me (teenage boys probably love the start!) - and is all a bit too Lord of the Rings at times (and those movies bore me rigid).

But then it does pick up with a simple revenge and betrayal plot JUST as in Gladiator and SO many other movies. Though to be honest I preferred The Sword in the Stone or other King Arthur movies.

This follows the fashion for casting black actors in historical drama - but really, were black Africans leading armies in 7th century Britain? It's absurd as casting white or Chinese actors as Zulus, when you think about it.

One niggle: using the word 'England' is WRONG as England itself did not exist until Alfred the Great (died 900AD) and his son who united England from various kingdoms.

The word they should have used is BRITAIN - the name of this island (which they always refer too).

This is especially true as King Arthur and Merlin are thought be many to come from the west, or Wales (which in the 7th century was a place of warring princedoms too) which is next to the west of England Glastonbury/Stonehenge region. The Welsh town Carmarthen even means 'Merlin's Town'!

They use the word ENGLAND for American audiences, I think, but it irritates and it factually wrong BUT THEN I don't mind so much fantasy dramas like this based on myths clouded in time taking liberties - I do mind when supposed factual historical dramas do the same (as with The Crown, or U571 or Argo or MANY other movies).

Just...absolute...drivel. I had to switch off after the 119th time "lads" was said. I don't want to talk about it anymore...

Arthur - King Arthur: Legend of the Sword review by KM

Must be the worse film I've watched, how anyone could pay good money in the cinema, a waste of good actors.

I put off adding this film to my rental list by the low star ratings, even though my son advised watching the dvd. Sometimes your perceptions can be wrong and for all those out there who want a dark yet imaginative, sorcery experience then this film is well worth the watch. Ok the odd cheesy moments and line - all these kind of films have them don’t they - and I also hear what the Guy Ritchie die hard fans are barking on about not being a typical Ritchie romp but hey, good to see him trying other genres, and both my son, my partner and myself would say good on you mate, you achieved that objective with great aplomb.

King Arthur: Legend of the Sword (aka Knights of the Roundtable: King Arthur) review by Mark McPherson - Cinema Paradiso

Don’t bother looking for any historically accurate elements in Legend of the Sword. This is not the textbook version of King Arthur you read about in literature class, but the amped up comic book adaptation you’d read between classes. You know the one; the version where giant elephants plow through castles, wizards cast spells of incineration on armies, martial artists spring from dojos and kings wield magical swords in times of war. It’s all very loud, overblown and slickly edited with Guy Ritchie’s trademark directing style. At least, for the first six minutes.

Guy Ritchie’s King Arthur could use more Guy Ritchie and less Zack Snyder. The film is at its best when utilizing Richie’s familiar filmmaking tactics of staging heists and following our heroes on a chaotic chase. It’s as if he took the cool elements of Snatch and Lock, Stock and Two Smoking Barrels, applied to the rather dreary sword and sorcery genre. But when Ritchie doesn’t have his fast flair on display, his picture settles into the typical and tired elements of your average summer blockbuster.

Charlie Hunnam steps into the role of a muscle-bound Arthur, performing greatly with his fists, despite stumbling with his tongue. Having lost his parents of royalty in a mutiny, the king-to-be grew up in a village brothel, quickly told in montage without much fat. While the film does glaze over this origin of his life, there are still far too many flashbacks of his parents’ deaths, replayed almost as much as the Zapruder film in JFK. You’ll get to see every angle of this tragic pathos where an evil family member takes out Arthur’s mom and dad, the only big reveal being that of the origins for the sword in the stone. No grassy knoll though.

The current king of Londinium is Vortigern, played by a surprisingly subtle and sinister Jude Law. He is conspiring with a disgusting octopus creature to attain more magical powers to rule over Londinium and eventually take out the pesky Arthur and his band of rebels. He has his moments, but never really comes into his own as a villain. This is mostly because we never get to see him jump into combat, summoning a CGI demon to fight his battles for him for climactic showdown.

Since most of the movie is a cavalcade of computer graphics, Arthur must team up with a mage (Àstrid Bergès-Frisbey) to counter many of Vortigern’s armies and magical powers. I assume the mage is Guinevere, but she is never once referred to by name. When not making a weak attempt at jumping in on the witty script, she spends most of the movie casting spells from the shows of birds and giant snakes. Like most of the supporting cast, strong as they are, everyone exists for the sole purpose of Arthur without much personality of their own.

The movie continuously speeds up and pumps on the brakes, never settling for either Ritchie’s slick style or an executive’s wet dream of special effects galore. It’s as if Ritchie was trying appease the younger teens of the audience with the inclusion of Arthur swinging his sword in slow motion in CGI environments against CGI enemies. I’d rather see Ritchie’s more true vision than the compromise presented on screen here. I know he can do better than just standard sword and sorcery epics and it’s not on display in this video game of a movie.