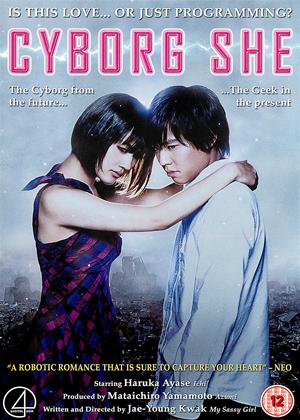 Synopsis:
Jiro is a loner. Every year he buys his own present and celebrates his birthday alone in the same restaurant. This year a beautiful, but kooky, girl joins in his celebrations and they spend the rest of the evening doing crazy things and having fun. Then, following a cryptic speech, she disappears. A year later the girl turns up again, except this time she is a cyborg from the future... Her function is to protect him and the world around him.
Actors:
Haruka Ayase, Keisuke Koide, Risa Ai, Nya Daigo, Yoshikazu Ebisu, Ken'ichi Endô, Masatô Ibu, Kenta Kiritani, Fumiyo Kohinata, Kaito Kondô, Rio Matsumoto, Sakura Mizuno, Rokurô Naya, Yasuhiro Roppongi, Ayumu Saitô, Megumi Satô, Suzunosuke, Hiromasa Taguchi, Naoto Takenaka, Kei Tanaka
Directors:
Jae-young Kwak
Writers:
Jae-young Kwak
Aka:
Boku no kanojo wa saibôgu
Studio:
4 DVD
Genres:
Comedy, Romance
Countries:
Japan

Reviews (1) of Cyborg She

If the Terminator came to love you... - Cyborg She review by DS

Cyborg She, a mistranslation, is a charming movie that from where I viewed it seems to be a light-hearted romantic remake of Terminator, which is as mad as it sounds. The entire film focuses mainly on the two leads to the exclusion of any other characters, with the exception of Jiro’s obligatory comic friend played by Kiritani Kenta. Thank goodness that the alluring and beautiful Haruka Ayase and Keisuke Koide have good chemistry and the occasional pantomime gurning from the latter did not detract from this.

Haruke Ayase had the more challenging role having to be an entirely emotionless robot and another similar role [I will not spoil this though] which she managed confidently.

Director and writer Jae-young Kwak manages to mix in some drama, romance and sentimentality that should have some of the hardest filmgoers dabbing at the corner of their eye. Cyborg She approached in the right frame of mind is an enjoyable two-hour romp through the multi-layered life of Jiro, with two main characters that will keep you invested in their story throughout. No mean feat.

The visual and special effects, whilst not all top-notch are particularly good when they need to be, as the story reaches its climactic conclusion.

Here we span centuries, disasters, time-jumping and heroic robots but at its heart is a romantic comedy with all the warmth and fun that genre should bring, which is a credit to Jae-young Kwak. If there is to be any criticism I would say the editing, especially near the end needed to be tighter to make the story’s conclusion clearer and coherent but that is a quibble. You will understand the main gist of the film regardless of how you get there.

If you were to say you throw in Terminator, A.I. Artificial Intelligence, I Robot and Back to the Future into a big pot boil them all up to make a romantic comedy you could be forgiven for predicting a horrible mess. Although some aspects of the story might be a tad difficult to follow at times Cyborg She is far from this.