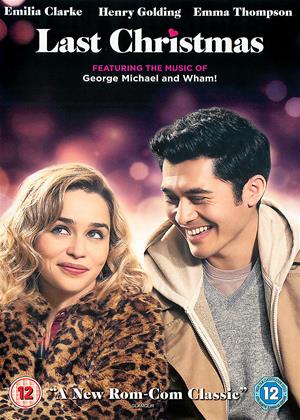 This likeable romantic comedy is just the thing to cheer you up during these worrying times. Emilia Clarke plays Kate, a selfish, careless young woman who meets Tom, a kind, compassionate man. We discover the reason why she is so cynical later in the film. Tom is mysterious and appears to be hiding something. We thought we had that figured out, but we were wrong! Emma Thompson plays an East European matriarch, Kate's mother, to great effect. Light-hearted, easy to watch, we really enjoyed it.

Well what to say about this. Great music, yes - though one objection. In the credits DECK THE HALLS (sic) is credited to Thomas Oliphant 19th C musician. BUT the tune is traditional Welsh, as WIki says: "Deck the Halls" (originally titled "Deck the Hall") is a traditional Christmas carol. The melody is Welsh, dating back to the sixteenth century,[1] and belongs to a winter carol, "Nos Galan", while the English lyrics, written by the Scottish musician Thomas Oliphant, date to 1862.'

Anyway, this is really aimed square at women and teenage girls - it's a child's film really. One could call it 'emotional pornography' like Mills and Boon or romantic TV drama (Bridgerton et all). Romantic interest fantasy.

The plot is very slushy, icky and odd. I found the litterless London hilarious and the lack of crime too. And btw half of homeless people in London have homes - in Eastern Europe, and yet all homeless people here are stereotype tramps with trousers held up with string. It's panto time!

Clearly made to appeal to the Chinese market, though what these conservative viewers make of the irritating main character's behaviour, I do not know.

I never forgave Paul Feig for mangling the Ghostbusters film and watching this was me giving him one more chance. I ended up turning it off. Utterly dreadful, clunky script. Fox's character really isn't likeable, she's the friend who always has drama and stress surrounding her that you end up just wanting out of your life. And good grief so much wokeness. Immigration, Brexit, homeless people in wheelchairs, and a gay couple who is also mixed race. Don't waste your time.

We lasted 13.01 minutes I'm afraid. Really wanted to watch this, love Emelia Clarke and Emma Thompson, but this just didn't grab us at all. Perhaps if we didn't have so much else to watch we would've watched to the end, but with plenty of other things to see, we weren't willing to carry on viewing.

Very thin story, and the lead actress trying to be "cute" was painful. I found my attention wandering all the time. Sorry, I can't think of anything good to say about this.

Not a bad film for Christmas - in the theme of "It's a Wonderful Life" - except with a ghost, instead of an angel.

I think people have been a bit hard on this movie. If you like Love Actually then you'll enjoy this. It is beautifully acted and has a beginning, middle and end which is not always the case! Emma T is a great script writer. Kate is a tricky character as she is difficult to like at first but you need to stay with it to find out her back story!

I enjoyed this film and think it's worth 4 stars .It's about a selfish hedonist called Kate who works in an all year round Christmas shop dressed as an elf.She meets a man Tom who is obviously keen on her but he keeps disappearing after convincing her to work in a homeless hostel .You find out why she's selfish and uncaring along the way and I didn't guess the ending which was a big surprise to me .Overall a pleasant film,well acted and nice to watch. JB

This nice little seasonal romcom has had a critical lambasting and it's so easy to sit and knock it but actually it's a rather delightful experience. Perhaps I was feeling all Christmassy or just needed a bit of cheer but I found this funny, sweet and even when it becomes a gentle tearjerker I still had a nice warm feeling. Emilia Clarke plays Kate, a wannabe singer who rushes around to various auditions but who works in a Christmas shop dressed as an elf. She's feeling aimless and avoids her domineering mother (Emma Thompson on fine form) until she meets Tom (Henry Golding), a handsome man who gets her to change her perspective on life but who remains elusive to her affections. Ok some of the messages in here are a bit clunky but who cares this is a Richard Curtis style Christmas film that offers no pretensions it is just a pleasant and quite lovely film. Clarke is simply great, she does zany comedy and sad girl all very well and aided by Michelle Yeoh as her boss and Lydia Leonard as her sister it all amounted to a lovely feel-good experience.

This was an easy watch and a pleasant alternative to the usual love story . Unfortunately we guessed the end before the actual revelation . Still a better watch than many films out there... Can't rate higher than 3 as it is a little thin and weak ...