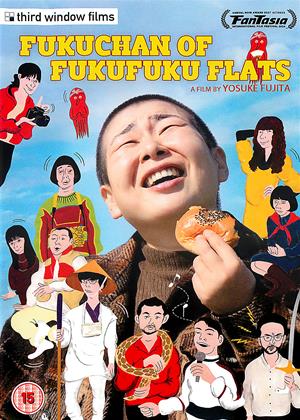 Synopsis:
32-year-old Tatsuo Fukuda, nickname Fuku-chan (Miyuki Oshima), is a painter who lives in a run-down apartment complex called Fukufuku Flats. He spends his days working up a sweat painting buildings, his nights mediating disputes between the other denizens of Fukufuku Flats, and his days off flying handmade kites down by the riverside. One day, an unfamiliar woman turns up at Fukufuku Flats. It is Chiho, his first love from his junior high school days who he has not seen for around 20 years, and she has come to apologize for something that happened in their past.
As Fuku-chan allows himself to get caught up in Chiho's quest to become a photographer, he begins to fall in love all over again with this woman who was responsible for the traumatizing incident that led to his fear of women...
Actors:
Yoshiyoshi Arakawa, Kanji Furutachi, Kami Hiraiwa, Asato Iida, Toshiyuki Kitami, Mei Kurokawa, Asami Mizukawa, Miyuki Ôshima, Okito Serizawa, Kimie Shingyôji, Kazumasa Taguchi, Yûki Tokunaga, Maho Yamada, Takeshi Yamamoto
Directors:
Yosuke Fujita
Producers:
Naoko Arai, Keiko Fujimura, Adam Torel
Writers:
Yosuke Fujita
Aka:
Fukufukusou no Fukuchan
Studio:
Third Window Films
Genres:
Comedy
Countries:
Japan

Some Men are not all they seem..... - Fuku-Chan of Fukufuku Flats review by DS

Fuku-Chan of the Fukufuku Flats is an odd Japanese film, mainly comedic it shoehorns in mental illness, loneliness, romance and unbreakable friendships alongside mystery and even perhaps tragedy. It sounds Shakespearian and in a way you could say it is – but with a modern Japanese twist.

The pace is gentle and slow-building and of course you get what someone from my part of the world might say is over-the-top gurning and histrionics, but truth be told this is main staple of Japanese films, in particular comedies, so I must guess from a position of ignorance that it is a culture thing.

The film is a usual Japanese mix of comedic and insane situations with extremely odd buy endearing humans thrown into strange and confusing situations mixed with a calm and stoic sense of not belonging, not quite being in tune with the world they live in. Yet the world this sits in is not only odd but cruel and hard too. Not 100% Japanese filmmakers trait but a definite wheelhouse Japanese directors and writers live in. If you like this style or storytelling you will enjoy Fuku-Chan, there is a definite lagging and bagginess at the midpoint but not enough to detract from the overall story.

The performances are at worst ‘okay’ and at best particularly good. The main ‘central’ character is Fuku-Chan ‘himself’ played with astonishing insight and skill by well-known Japanese comedian Miyuki Ohshima, it would be a lie to say that I did not realise it was a female playing a man, certain ways of walking and postures, no matter how hard she tries does show through and perhaps she tries too hard on some male traits but overall a very successful performance. Why? Well, it does not really matter as it works but certainly I did not feel that Ohshima brought anything different to the performance or character that I could discern. This is not a criticism because as I said it works.

The supporting characters who orbit Fuku-Chan are played convincingly enough that you would are happy to spend time with them and be happy, sad and joyful for them, Even the most perplexing and mentally disturbed character is rounded enough.

Fuku-Chan OF Fukufuku Flats is an entertaining film that gives enough pause to make you think and ends on a positive note. It will not change your worldview and will not stay with you for days and weeks afterward but that in itself is not a negative. It is a well-made thoughtful Japanese comedy film that depending on your exposure to Japanese films and personal sense of humour will make you laugh or not. Hopefully, it might make you seek out other films from these sources and for me this is a good world.

Fuku-Chan of Fukufuku Flats is not a world-beater but hopefully it can open viewers to other cinematic worlds.