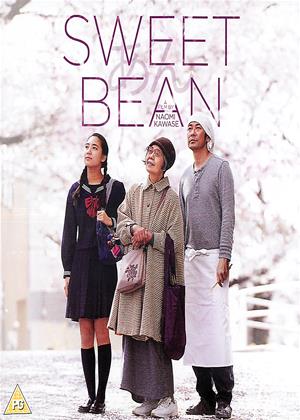 This was my first Naomi Kawase film and I enjoyed it but it is very light and easygoing almost to a fault. On the whole, the film achieves a very naturalistic and understated style which I like a lot but I did find that it got a little schmaltzy in some key places - never offensively so, just a touch. The director seems to prize amateur actors and I thought they all did really well here. I've heard this is Kawase's most mainstream film so I'm looking forward to check out something a bit more challenging by her.

Sweet as a sugar bean - Sweet Bean review by KC

A lovely movie, with two great central performances from Masatoshi Nagase and the adorable Kirin Kiki as Tokue the elderly lady who makes the sweet bean paste that turns a pancake stall into a success. The Japanese are amazing at filming food, like Tampopo and Jiro dreams of Sushi, Sweet Bean captures their reverence for even the most humble of foods. The story of their friendship is gentle, melancholy and warm. It touches you and leaves you with a tear in your eye and smile on your lips.

This is a film made from true experience of humility and heartfelt warmth. Is Tokue a bodhisatva? She has a mind of beauty and compassion, of a being who devotes herself to the welfare of others . By entering the lives of the other two main characters she draws out for them their own deepest love for another human being; she reveals what it means to love. Oh yes, the bean paste is the catalyst for the story

Baked Beans with Sugar does not cut it. - Sweet Bean review by DS

On the surface, this simple Japanese story is another of a slew of recent films where working and making food is the story. Although the title is An or Sweet Bean and the main focus of the early part of the film is making a delicious ‘an’ and the specific way you make it, but this is only a small part of the tale. In fact, I would say there is a deception at work here, to get you comfortable with Tokue and how the sweet bean sauce is made that turns around the fortunes of Sentaro’s little food outlet, you would be justified in thinking this is the thrust of the film.

What we are treated to is a tale of friendship, positivity, intolerance, and love. It is in its small way wonderful.

Essentially it is a three-hander at most, with one or two simple locations that could basically be any city in the world, except for the beauty of cherry blossoms. What is focussed on is the three very different characters, Sentaro is lonely, unhappy and carrying a burden that means he works at the dorayaki shop no matter what, Wakana lives with her single mother who seems not to concern herself too much with her and having little to no money she cannot carry on in school, Tokue is an old lady who needs human interaction, to be free to work, and make the perfect ‘an’. What we get is the interactions between the three, nothing major or overly dramatic and as we move on their lives do too. It is subtly done, in a gently smiling amusing way and masterfully acted.

Kirin Kiki, an eccentric lady all is so, sweet, and natural as Tokue, so much so that it is easy to forget she is acting. I cannot pay any actor a great compliment than that. Masatoshi Nagase has the tougher task as he must portray someone who is broken from his debt, clearly unhappy, he is underneath it all a friendly, kind, soul, but it is buried. To play this with just hints, all the while growing towards what you suspected all along, with the help of Tokue and Wakana. This brings us to Kyara Uchida who has the less well-drawn character, but she works well with what she has and is entirely believable as that shy schoolchild who does not have the funds and means available to her as her classmates do. Seemingly they represent the present, the past, and the future without smacking you about the head shouting at you.

I would have to say that the three actors are very good and help drive the story forward well. This is particularly helpful when the film does sag slightly near the end as the denouement is dragged out a little bit longer than it needs to be but nevertheless it does not detract from the film.

The screenplay, by director Naomi Kawase, is beautifully written and generally economic and lean with no unnecessary padding. The directing gets along to where we need to be but gets a bit bogged down near the end although considering the way the story ends this is understandable,

Both at once uplifting and terrifically sad the film ties up neatly at the end and leaves you with a wistful smile after it has shown you the darker side of human nature and a great cultural shame of Japan. I cannot tell you the road Kawase et al takes us down to get to this bittersweet ending but it is worth it, even if the path does tend to meander a bit too much at times.