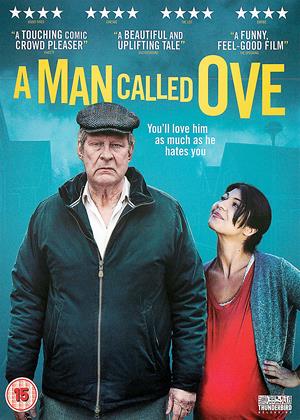 Ove is a grumpy old man who lives on his own in a small development in Sweden. He has recently lost his wife to cancer and has also lost his job. He is rude to his neighbours and is fanatical about rules and everything being done right. At first Ove seems to be a person that is difficult to like (even though some of his sarcastic comments to other people are very funny).

However, when a young couple with two children move in next door, a friendship slowly develops between Ove and the Iranian wife. We also see flashbacks to Ove's past. It seems he has always been a simple and slightly awkward person, but his love story with his wife is charming, as she sees Ove for the good soul that he really is. We also learn more of the trials and tribulations of Ove's life that go some way to explaining why he is like he is. His relationship with the new family starts to change him and he starts to see life differently.

There is a lot to like about this film. The character of Ove is wonderfully acted by top Swedish actor Rolf Lassgard and Bahar Pars as Parvenah is great as Ove's saviour. The film is very funny in parts, and also very touching. It is the type of film that will make you smile and at the same time bring a tear to your eye.

Highly recommended by me.

Although meant to be a comedy, it has some sad moments.

Well acted and easy to watch, it probably will ring a bell with those of us who have reached the 'Grumpy Old Man' stage in life.

Ove is a grumpy and pedantic old man and until the end of the movie the viewer doesn't get to understand why. However I felt for him and some of his sarcastic retorts are truly funny.

A moving story about loneliness.

This was recommended to me and although I did not think it would appeal, i was wonderfully surprised. This film is very well crafted, cast and scripted, with fine acting from Rolf Laasgard and Bahar Pars . While the film is very moving, it is also very funny- I almost want to watch it again to see Ove on his morning rounds. This is my favourite film of 2017.

Having read the book, I was worried this might not live up to it. But it was as wonderfully quirky, funny and moving as the book. Brilliant!

A 'Must Watch' Movie: Wonderful and Uplifting - A Man Called Ove review by EJ

Rolf Lassgård's portrayal of what it is to be human in this crazy world we live in is absolutely wonderful. We couldn't stop laughing and crying throughout this funny and heartbreaking movie. Thank you, those responsible, for the laughter and the tears. What all movies should be about!

Although it just stops from erring on the side of 'mawkish' towards the end, this is a very enjoyable, funny and emotional piece of work, sometimes interspersed with sadness. Beautifully acted by all the cast, including the cat, it presents as seamless entertainment. I had a smile on my face almost all of the way thru it plus some laugh out loud bits.

This film makes me want to read the book...the highest compliment there is. - A Man Called Ove review by PV

I really enjoyed this film - except when the subtitles stuck at the 113th minute! I rewinded and fastforwarded and they worked again. Why? No idea! But so glad they did.

The reasons I am giving this 4 not 5 stars are: 1) it's a tad overlong; 2) some places are just too sentimental.

I don't mind sentimentality though or moving films, and this film is moving and funny and sad. And some lines are really clever and funny - the character development is excellent too.

Should have one best foreign film Oscar in its year.

The best compliment I can make about this film is that it makes me want to read the book!

I haven't enjoyed a film as much as this for a long time. Ove is constantly frustrated in his efforts to escape his world without the woman he adored. His new neighbour changes everything.

what a surprise!! - A Man Called Ove review by am

Wasn't sure what to expect from this movie and I forced my 15 year old leave his Xbox and netflix and watch it with us, so a lot was riding on this.

What a great story , even my grumpy 15 year old had to admit he enjoyed it and had him laughing. Made a change from the usual special effects and crash bang wallop blockbusters. A gentle look at loss, love and friendship. Highly recommend.

A must see film - A Man Called Ove review by bijou

A well acted moving and thoughtful film. It makes one realise that life is well worth living after losing a dearly loved one. I would highly recommend it.