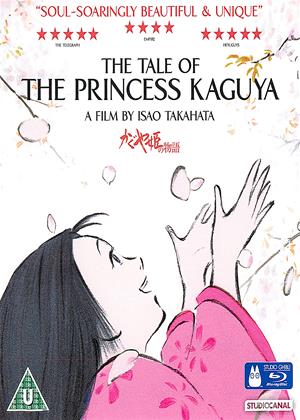 Rent other films like The Tale of the Princess Kaguya

Reviews (1) of The Tale of the Princess Kaguya

Beautiful fairytale about a young girl sent down to earth, her happy childhood in the countryside and bleaker years after her father comes into money and moves to the city to turn her into a princess. And forget the English langauge dubbing, I switched off the dub and wantched it in japanese with subtitles - the one way to way a foreign langauge movies is in its own tongue!!

The music as ever, is sublime.

If you can see this film in your language, I encourage you to watch it. It has pretty much everything you could want in a film, and it should be fine for all ages. Here is why I think it’s worth the watch.

The Tale of the Princess Kaguya begins with a bamboo cutter, who discovers a tiny nymph within a bamboo stick. The nymph - Kaguya - grows rapidly, and life is far from simple. Becoming noticed and desired by an array of suitors who risk their lives in the hope of winning her heart, will she find love and happiness, or is there a much darker end ahead of her?

The story of this film is inspired by the ancient Japanese folktale ‘The Tale of the Bamboo Cutter’. Its tale is beautiful and complex in character development. Though obviously only a tale and not the story of how humans came to be here, we can still learn from it. We must look outside ourselves in order to see the big picture, and discover how the world is not just the terrible stories written in newspapers.

Talking just about the English dub cast, I am surprised this film hasn’t been advertised more. The very talented voice actors include: Chloe Grace Moretz (as the title role), Darren Criss, James Caan, Lucy Liu, and many more. Everyone made their character come to life, and you were able to forget who the voices were behind the drawings.

It is amazing how much movement and emotion could be created by seemingly-simple drawings. The ‘camera movements’ were expertly done, and I hope to see more work like this in the future by all different countries.

Taking in mind that this is both an adaptation of an ancient folktale, and a translation that could have lost some of its shine in the process, it is still an amazing story.

It saddens me to read the criticisms of the choice of artistic expression in this film. Its animation is different to what is usually seen, but I find it to be breathtaking. My favourite parts are the emotional and action scenes, where the drawings become so much rougher and scribbled. You can almost feel the weight of the pen on the paper. It is probably the only art style that would have worked with this kind of story, and definitely made it succeed.

It is not surprisingly at all to see how well-received this film has been. Both critics and audiences alike have been enthralled with the story and art, and this is refreshing to see. It has been nominated - and won - numerous awards so far, and I would like to see it appreciated alongside animation films from Disney and Pixar.

Running for just over two hours, it might be a bit too long for younger audiences to fully enjoy, but it’s one to remember for when they’re older. I enjoyed it, and I would recommend it to anyone.