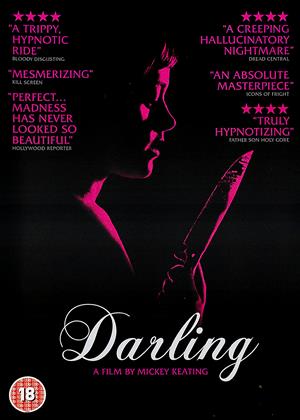 Opening with some stunning panoramic shots of New York City, all crisp skylines and looming buildings, this film could have taken place in any era. Although there is no specified time in which these events are set, the style of décor and clothing seems to indicate anything from the 1930s to the 1960s. Filmed in monochrome, this provides a timeless and stylish David Lynch-ian study into madness.

In the middle of all this, little Lauren Ashley Carter as Darling is about to take on a job as Caretaker of a mansion. As soon as Madame says, “I really shouldn’t tell you this, but…” the scene is set: the previous caretaker has met with an untimely demise … but Darling is assured she has nothing to worry about. No matter how artistically shot this is, and how wilfully playful some of it may be, an opening like that never fails to sound clunky.

And so, to the accompaniment of shrieking violins and jumping, jerky camera movements, we are invited to observe Darling very convincingly succumb to madness. And that takes up the bulk of the film – often without dialogue and very ably played by Carter, there is nevertheless a sense of ‘is that it?’ Even as she goes to great lengths to end the life of her new guest (played by Brian Morvant) and then nervously heaves his corpse into an empty bath, it becomes clear Darling’s instability is all we’re going to get in terms of story-telling.

Darling’s alienation and severance from the rest of the bustling society is palpable, and Carter retains great presence as she continually slides further into her isolation (her eyes almost take on a performance of their own), the overall effect is one of intimate turmoil which appears to manifest from building itself.

To further distance itself from the trappings of normal filmed story-telling, this is split into six chapters – Her, Invocation, THRILLS, Demon, Inferno and The Caretaker.

Eerily similar to Roman Polanski’s Repulsion in tone and atmosphere - yet filmed on a completely different level: Darling comes off as an unnerving psychological experience that will engrave deep scars onto one’s mind, burry them and let them resurface sometimes in the near future, unbeknownst to its host’s merit. Also, the performances by Sean Young and Lauren Ashley Carter will go down as one of the most riveting portrayals of broken minds, shattered hopes and scattered dreams in cinema history. Kudos to director and writer Mickey Keating for making us toss and turn in our sleeps long after we’ve (almost) forgotten his black & white avant-garde flick.

The story Darling tells is one of simple people and events caught up in extraordinary mental circumstances that make them lose their sanity, one step at a time. But, in order to fully grasp Darling’s message, unique aesthetic and appreciate it fully, one must enter toward it with the right state of mind. Just like mid 60’s Repulsion – Darling must be exquisitely soaked to be understood, even if it means depriving oneself from one’s own sanity throughout a given day.

In a way, Darling’s narrative power is constricted within its tightly knit storyline, albeit a well-structured one: there are no classical villains, antagonists or opposition against which Lauren Ashley Carter’s Darling (her movie alias) can explicitly fight against; rather, after half an hour in, one can deduct that Darling’s one and only weakness is located within her own mind.

As said, the plot is simple and potent: a young girl is given custody over a suspiciously looking house, which she hesitatingly accepts. Then, step by step, everything starts going awry and it seems the girl is starting to lose her sanity. Or is it the other way around? Bookworms will immediately draw a parallel to Henry James’ ghost story about a governess, a boy and his sister, and certain dubious happenings that were taking place inside a large, masterless mansion.

Darling’s quite pace, slow revelations and careful execution will draw upon many to refer to it as pretentious or half-baked. To those I proclaim: whilst deeply wounded – expressionism is far from dead.

Finally, to fully grasp Darling’s scope, one must suppress everything one had known about film before bursting through the theater’s doors. Its technical flawlessness, carefully crafted long shots, unearthing pauses and character stares toward the camera (simulacrum representing us, the viewers) will stun moviegoers dead in their seats. It’s not a film for the faint-hearted, nor the easily offended audiences. Darling hits where it hurts the most.

If you want to fully discern what director Mickey Keating’s piece has to offer, hurry and enter without compromise or second thoughts: it will all be worth it after the curtains fall.