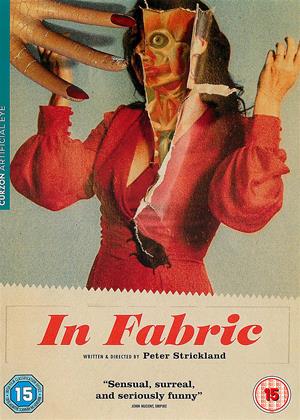 Reviews (7) of In Fabric

Memorable and unusual film. - In Fabric review by MG

I loved the combination of humour, horror and cultural critique in this film. The characters and relationships are also well observed. It’s a very unusual and very enjoyable film.

Inside No. 9 directed by Dario Argento - In Fabric review by RW

A beautiful looking very strange comedy / horror film. The design is brilliant, the details are fantastic and the plot is rather odd. It is a bit slow but that is when compared to contemporary fare, put it next to Inferno and it is far less so. I thoroughly enjoyed it.

Dress To Kill - In Fabric review by BG

There have been haunted houses, hotels, and cars, but this film centres around a haunted dress. Significantly a red one. As the dress passes through several people, all manner of weird and horrific things happen. You mustn't take this film too seriously, as I saw it as an inventive tongue in cheek homage to Dario Argento. I appreciated the humour, which ranges from a disastrous blind date in a Greek restaurant, an elderly gentleman getting excited over a female mannikin, some biting satire on retail nightmares, a terrifying boss who just STARES at you, two pathetic Job's worths in suits, the most boring man in the world who fixes washing machines, and his fiancé who chats about the mundane and trivia while making love. This is really something completely different.

Strange - In Fabric review by HH

This film had a very eerie quality and

was interesting if not very clear where it was going. I would have iked to see more of the origin of the shop and its assistants, but it left you hanging. Perhaps that was the idea?

Another film director amusing himself - In Fabric review by SE

I thought I liked wacky, off the wall, artistic stuff but this was a bridge too far. It's point was beyond me. I especially couldn't understand the somewhat robotic sales assistant who appeared to be speaking in tongues. I'll admit there were some great comedy turns and some wonderfullly lugubrious filming. Maybe you just have to love it for that and stop trying to see a message.

Interesting Idea, Great Story, I loved that we Follow a Single Garment through different Owners ,Sadly Its Very Badly Put Together .

Interesting Set of Characters ,but Wasted on an Overly Arty-Farty Production that Killed the Comedy or the Horror .

Loved the Idea ,I just couldn't sit through it all again if you paid me . Tediously ,Tooth Achingly Slow .

Not for me - In Fabric review by mK

I like odd off the wall films, but this one was too much for me. I did watch  it to the end, but couldn’t recommend it to anyone. The plot is so episodic it becomes boring.