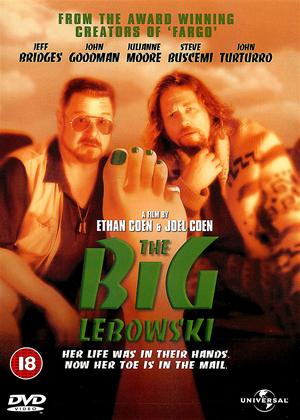 Reviews (5) of The Big Lebowski

The Dude - The Big Lebowski review by CP Customer

The plot is as confused and rambling as the film's main character, but that adds to its charm: if you can follow the plot, you have probably missed the point of the film. A likeable collection of misfits (not quite the bums one charcters calls them) is pitted against a various forms of evil, with dashes of fantasy thrown in. It's very funny in parts - I liked it.

Jeff Bridges has the central character who is very cool and pretty lazy. His reaction to his friend John Goodman who is unhinged and aggressive is chaotic and often funny. The plot goes round and ties itself in a knot without being that interesting. I liked the general feel of it but not the plot. It is not really an 18, brief nudity and moderate violence. There are 2 moments of greatness one by a bowling competitor you may recognise from Men in black I and the other from the third quieter bowler.

I know this is regarded by many as a 'classic' Coen Brothers film but it just didn't do it for me. Why is anyone's guess: I adore Jeff Bridges, like John Goodman enormously and found Julianne Moore convincing but despite these excellent ingredients they didn't gel together. Like so many films today, if your joke set up isn't working (i.e. it's not funny) then pep it up with a stream of shouting and swearing thus alerting watchers that 'something hilarious is going to happen any day now...' I am not averse to swearing (watch Pebbles the cockatoo on Youtube) but there is a limit before it just becomes background noise, therefore wasted.

We watched this as a selected movie in our film club and most of the others found it 'wonderful/the funniest film they had ever seen etc.' so maybe my humour by-pass worked.

The set ups and jokes are laboured: Who would have guessed that JG would throw the wrong case out of the car window tee-hee.....

Not worth bothering - The Big Lebowski review by George

It starts with someone being assaulted in his home then there's a so called dialogue with 90% the f word. We turned it off and found something better, which wasn't difficult. There are lots of good films so why bother with the poor ones?. Others obviously agree.

Bridges good one. - The Big Lebowski review by NC

Certainly quirky, and only Bridges fans probably like a lot, but is one of my favourite films to watch every so often. Fisher King of course in there, Thunderbolt and Lightfoot etc......