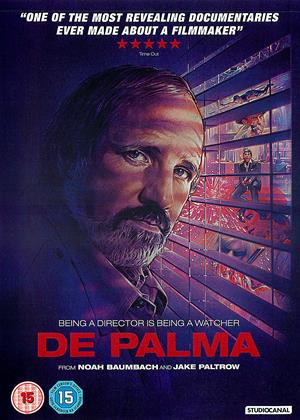 Synopsis:
Lively, illuminating and unexpectedly moving, Noah Baumbach and Jake Paltrow embark on a personal and candid dialogue with iconic director Brian De Palma. As one of the most talented, influential and iconoclastic filmmakers of all time, 'De Palma' details his whole career from his early days as the bad boy of New Hollywood to his more recent years as a respected veteran of the field.
With an untouchable filmography including classics like 'Carrie', 'Dressed to Kill', 'Blow Out', 'Scarface', 'The Untouchables', 'Carlito's Way' and 'Mission: Impossible', 'De Palma' is an incisive portrait of a truly one-of-a-kind artist, and an exhilarating behind-the-scenes look at the last 50 years of the film industry through the eyes of someone who has truly seen it all.
Actors:
Brian De Palma
Directors:
Noah Baumbach, Jake Paltrow
Producers:
Noah Baumbach, Jake Paltrow
Studio:
StudioCanal
Genres:
Documentary, Special Interest

There’s no fluff in this documentary about the career of director/screenwriter Brian De Palma. He sits down in front of the camera, staring directly at the audience and divulges as much as he can in just under two hours. Nobody else is interviewed. No friends, no actors, no co-workers, no studio executives and no narrating director about the events of De Palma’s life. He speaks for himself in this rather intimate reveal about both his personal life and his love for cinema.

This isn’t so much a tell-all documentary about the man’s life so much as it is the ultimate fan interview. The movie gives answers to the questions I’d most likely want to ask. What inspired you? Was working on Mission: Impossible a nightmare behind the scenes? What happened with the ending in Snake Eyes? How do you feel about movies today? My initial thoughts about such questions is that they’d probably be dismissed as either too personal or too boring. And, yet, De Palma seems not only open about such topics, but expresses them with an easement as though he were just chatting over drinks. He doesn’t go too deep into his divorces, but isn’t afraid to bring them up. He has a dislike for special effects, but isn’t overly bitter about it. There’s the chance that he’s just putting up an act for the camera, but if he is, he’s a damn good actor about being so unique and likable for all his challenges.

Admittedly, De Palma is a movie specifically for Brian De Palma fans that are at least semi-familiar with the man. He skips over most of the genesis of each movie product and talks about the more interesting aspects. With Carrie, he talks about the awkwardness of shooting the opening scene in the school showers, the ineffectiveness of relying on di-optic shots for the climax and why Carrie’s mom had to be crucified as opposed to the book where she dies of a heart attack. With The Untouchables, he talks about working such an all-star cast and the specifics of composing the soundtrack. On and on he purges through his most notable films, hitting the most entertaining stories of each one.

Directors Noah Baumbach and Jake Paltrow keep a focus on De Palma at all times, only cutting away from him to showcase a photograph from either his personal or professional life and clips from the movies he’s directed. No fancy graphics, animated skits or transition effects. Just the man and his work on screen with the audience being more mystified by his words than distracted by flashy portrayals. When De Palma talks about di-optic shots, we see his most famous of di-optic shots. When he talks about Sean Connery getting some dirt in his eyes when being shot up, we see the very scene in which that occurred.

I think what I loved most about De Palma, aside from a salvo of great filmmaking stories, is how inspiring his words are for budding filmmakers. His early years of experimenting with film and his desire to continue making the films he wants to make are enough to make any film student jump out of their seat and make something great. De Palma makes filmmaking appear that intoxicating of an industry for all its flaws. My only complaint is that the film could have gone longer as I’m sure he has a few more stories left to tell and plenty of ears willing to listen. It’s such a wonderful feeling when a one-man documentary leaves me pleading for just one more question.