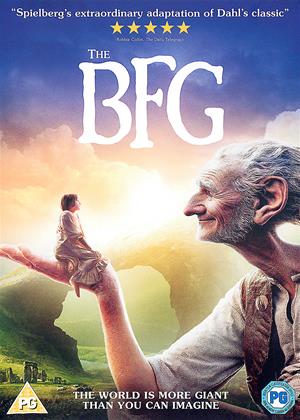 Well put together kids film. Seems the kids films are better done than the adult ones! Bit slow going compared to the Alice films, but nicely done.

Disappointing sem-animated film based on a book with great first half (and awful second half). - The BFG review by PV

First of all, let me say that the massive flaws in this film - the second half - are due to flaws in the original Roald Dahl book. Fact is, by the 80s his writing and ideas had gone downhill a lot and books like the BFG are not a patch on early works such as Charlie and the Chocolate Factory or James and the Giant Peach. Roald Dahl is really 'jumping the shark' by this point.

Spielberg does a great job, as expected, and the special effects are amazing and seamless.

And the first half of the story is really enjoyable - though the odd northern accent of the little girl made me wince (the character of Sophie is based on Dahl's grand-daughter and future model Sophie Dahl, now married to Jamie Cullum and living in Roald's old house too). A lovely idea about dreams works well and is well realised.

However, after about the half-way point things go OTT and then some - which is a real shame though is the fault of the book not the film director. It's all heading for a typically huge Hollywood ending with everything thrown in (no spoilers). A decent John Williams soundtrack though not as memorable as previous ones. And Mark Rylance is always very annoying for me, for some reason.

The first half is worth 4 stars but the last half 1 star, so 2.5 stars overall rounded down to 2.

This started ok for me then got a little slow and boring to stay interested in it . The kids will probably like it and I usually enjoy a lot of them but this is really looked forward too but was left disappointed. Don't think it was how it was made just the story wasn't good enough.

A curate's egg - The BFG review by BH

I found the first half rather slow, but enjoyed the second half. I thought the effects and acting were excellent. The little girl should be singled out, not to denigrate Mark Rylance and Penelope Wilton.

The new adaptation of the original animation film was worth a view. Great effects and lots of laughter from start to finish.

A good blend of real life actors and CGI giants.

This is a bigger-budget live-action version of BFG re-imagined for Generation Snowflake, with all the darker elements airbrushed out. The strict orphanage with its horrible mistress is replaced with something like a youth hostel in which Sophie apparently has free reign to wander around at night shouting at drunks in the street. The giants of the animated version were terrifying; these giants are little more than knuckle-dragging frat boys who bully the BFG but never actually harm any children. Perhaps young children will enjoy this, but adults should give it a miss.

It may have been over thirty years since Steven Spielberg directed the family favorite E.T., but he proves with The BFG that he still hasn’t lost that childhood sense of wonder and adventure. In adapting Roald Dahl’s classic kids book, with a screenplay by E.T. scribe Melissa Mathison no less, Spielberg has crafted a movie that is grand in scale, sweet at heart and innocent in its child-friendly humor.

It’s the perfect bit of wish fulfillment with the young Sophie being the hero of this story. Literally plucked from her London orphanage, she is whisked away to a magical land of giants. Most giants eat people, but not the smallest and scrawniest of them who Sophie dubs as the Big Friendly Giant, a stunning CGI character performed and voiced by Mark Rylance. Seen as the runt by his giant brethren, the BFG happens to be the most intelligent of the giants, but still behind that of human children. Sophie, jumping at the chance to be an expert, teaches the BFG how to speak English more clearly, how to read much better than he already can and how to stand up to the bigger bully giants. In exchange, the BFG reluctantly reveals his curious hobby of capturing dreams and distributing them to the children of London.

Though the bully giants present a threat, it’s not as urgent or as focused on as the relationship of the two leads. The BFG has a laugh over a slimy vegetable stew about Sophie fearing the giant will eat her. The two of them share a dazzling night of catching dreams under a special tree of stars. Sophie later convinces the BFG to introduce himself to the queen and they share a breakfast with all the food the kitchen can muster. These whimsical moments that seem to lack a cohesive plot may some detrimental to the story, but Sophie and the BFG are both such likable characters that I didn’t mind the divergence. I liken the experience to that of My Neighbor Totoro, a movie willing to slow down and enjoy the splendor of its own world.

As expected from Spielberg, the special effects of the giants and their world are amazing. Mark Rylance completely disappears into the role of the titular giant with his skinny frame, balding head and large hands. I especially dug hearing him speak in the giant babble of “whizpoppers” and “snozzcumbers”, an affectation that could have grown annoying, but is genuinely amusing when spoken with such earnest and heart.

“Whizpoppers”, by the way, is giant speak for magical farts that apparently have the same force as a small jet. These are possible through a special drink the BFG has made in which bubbles go down as opposed to up. He decides to share it with the queen and her friends, which leads to one of the most hilarious moments in the entire movie. Childish humor? Perhaps, but nowhere near as disgusting as most fart jokes tend to go and surprisingly charming for a scene where three dogs propel themselves around a room via their whizpoppers.

Despite its massive budget and wandering plot, the BFG is a very comfy picture where children (especially little girls) can see themselves as the heroes, teachers and adventurers in a world of magic and giants. It’s a perfectly light bit of childhood wonder, as in a scene when the BFG relays a silly dream he’s implanted in a sleeping boy. The dream is absurd and all over the place, but most dreams appear that way anyway. The BFG is one odd dream I thoroughly enjoyed, beaming with the same thrilling sights and magical amazement of a child’s wild imagination.