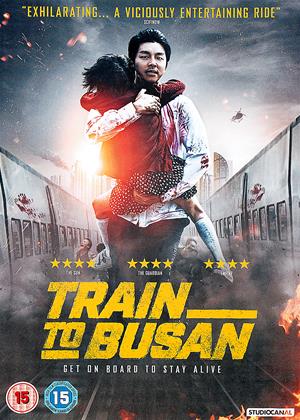 Synopsis:
As an unidentified virus sweeps the country, the Korean government declares martial law. As the country descends into chaos, one city, Busan, is rumoured to have successfully fended off the virus outbreak and remains the only beacon of hope for those not yet infected. But when the virus breaks out on an express train to Busan, passengers on board must fight for their own survival...453 km from Seoul to Busan. The struggle to survive. Get on board to stay alive!
Actors:
Yoo Gong, Soo-an Kim, Yu-mi Jeong, Dong-seok Ma, Woo-sik Choi, Sohee, Eui-sung Kim, Gwi-hwa Choi, Jang Hyuk-Jin, Seok-yong Jeong, Chang-hwan Kim, Myung-sin Park, Eun-kyung Shim, Soo-jung Ye
Directors:
Sang-ho Yeon
Producers:
Dong-ha Lee
Voiced By:
Terri Doty
Writers:
Sang-ho Yeon
Aka:
Busanhaeng
Studio:
StudioCanal
Genres:
Action & Adventure, Horror, Sci-Fi & Fantasy, Thrillers
Countries:
Korea, Top 100 Films, Action & Adventure, Horror, Sci-Fi & Fantasy, Thrillers

Reviews (10) of Train to Busan

Riotous thrill-ride and more - Train to Busan review by Alphaville

Those rampaging zombies from 28 Days Later are back and this time they’re on a train, so hold on to your seat for the ride. South Korean cinema is showing Hollywood how to do it these days and this is terrific genre film.

Director Sang-ho Yeon is completely in control of his medium, filming fluently with panache and imagination, both aerially and on the ground. Less skilled modern filmmakers resort to amateurish hand-held camera shots to mimic immersion in a scene. Sang-ho Yeon shows how it should be done, with style to spare. If you’re interested in the technical aspects, watch the ‘Making Of’ feature on the DVD.

Although it’s the director’s first live-action movie he has an instinct for when to build tension, when to quieten it down and when to really ramp up the action. What’s more, he makes us care about what happens to his characters, right up to the tense closing seconds. There are moments when you’ll shout at the screen like a kid.

The zombies are expertly choreographed and there are some remarkable scenes. One has them falling out of the sky then getting up to continue their rampage. Another messes with trains in a way we haven’t seen since Frankenheimer’s brilliant The Train. Some shots have an almost apocalyptic grandeur. This is what World War Z should have been.

With great visuals, great situations and a resounding score, Train to Busan is not just for fans of the genre but for anyone who thrills to visceral film-making. It’s fun, it’s exciting and it’s beautiful.

This begins with one of the best pre-credit scenes I’ve seen in a while, featuring a deer knocked down and apparently killed by a flustered van driver. Moments later, the crumpled body in the road judders back into life, struggling to stand. As it does so, we see its eyes – dead and milky. The creature has joined the ranks of the living dead!

Next we meet sulking child Soo-an (Kim Su-an), who is upset because her father Seok-woo (Gong Yoo) works all the time and spends no time with her. I have a problem with this kind of thing, and other similar scenes in other films. Perhaps the child would be less brattish if the parents gave up work and instead of a WII (or two) to play with, she had a stick and a clementine. Hardly! “Dads get all the bad rap and no praise,” says big soft husband Sang-hwa (Dong-seok Ma) at one stage. Seok-woo, however, has his own story to tell …

Anyway, this distant father and child are but two passengers who board the train to Busan, amid news reports of violence and rioting in the streets, and also a wayward passenger exhibiting symptoms of a strange and deadly disease.

And we’re off. Whilst the rapid transformations of many passengers into zombies relies perhaps too heavily on the actors’ facial mannerisms and comes across often as ‘over-enthusiastic’ acting, there’s no denying the effect of an enclosed body of people reverting into killers in some tensely choreographed scenes.

My favourite character might well be Michael Ripper-like Yon-suck (Kim Eui-sung), self-serving CEO who does everything, and betrays everyone, in order to survive amidst the spitting, fast-moving zombie creatures. In one of my favourite scenes, the ringtone of a mobile phone in another carriage is used to successfully deflect the attentions of the ravenous pack. Watching them charging as one toward the source of the sudden, tinny music, is very effective.

Every possible drop of tension is wrung out into the running time. For a while whilst watching ‘Last Train to Busan’, I felt there was something holding it back from greatness. Brilliant direction, acting and urgent pacing – however, I couldn’t get completely immersed in it. And then, somewhere along the way, that changed and I was hooked. The tension is impossible to resist. What a journey!

I should have known better as subject matter apart, I found the relentless quest for blood on the part of the zombies boring in the extreme. Given three stars as I'm not the best one to judge this genre and am sure most people into zombie movies will enjoy it.

Not a horror fan, but this kept me on the edge of my seat - Train to Busan review by Champ

But this had good reviews, so I thought I'd give it a go, and I'm really glad I did. The zombies themselves are just the driver of the movie, the reason other people do things, and the real people are the interest in this movie. The range of characters and their motivations are broad and deep, and that's what drives the movie along, and it felt like an action thriller rather than a horror to me.

Happy to recommend it to non-horror fans. And this might be an anti-recommendation for horror fans, as I didn't really find it scary (and I *hate* being scared in a movie, hence my dislike of horror).

Over sold and under delivered... - Train to Busan review by Schrödinger's Cake

I’m sad to say that I found myself swayed by the 4-star rating and positive reviews, and added this film to my list. Big mistake.

It opens well, with a deer being run down in a car accident, which then getting promptly stands back up as an evil zombie-deer. Awesome! But that’s pretty much it for the rest of the film. The rest is an oddball, cliched mishmash of ideas that have been recycled from other zombie films, and I also suspect several dodgy Australian soap operas too (cue yet another soppy piano interlude as someone passes away).

when the Korean cinema is good it is VERY good .

This was a good zombie movie and very entertaining, a lot of predictable things happen but I didnt rent the movie thinking that it would break new barriers, that being said as it’s mostly set on a train it does separate itself from others slightly which makes it stand alone. Well worth a watch.

even my wife enjoyed it and shes not a fan of zombie films.

Subtitled but thats no problem. very easy to understand whats going on.

superb zombie romp! even though there are far too many zombie films nowadays and the genre as a whole has been compromised, this one is defo worth a watch.

Yeah, Train To Busan is a mixed bag. Let’s start with the obvious, which is also the good: Train To Busan features an interesting premise, a good build-up, some interesting characters (not the main guy), and a somewhat fresh take at the currently-overdone genre of Zombie flicks. Where Train To Busan falters is its inability to provide any real motivation to its characters amidst the backdrop of a zombie infestation gone-awry. And don’t give me all that “but zombies can be treated as a separate character in the film, and so forth”. Yes, you would be correct if you would assume zombies can become a character in and of themselves/itself, but this can take the film barely so far until it the premise breaks apart. Or until either the filmmakers or the audience gets bored, and here we’re witnessing the occurrence of the latter.

Train To Busan is directed by Sang-ho Yeon, penned by Joo-Suk Park and Sang-ho Yeon, and stars Yoo Gong, Yu-mi Jung, Dong-seok Ma, Sohee, and Su-an Kim in the main roles. The film follows Seok-woo (Yoo Gong) in his quest to right some previous wrongs to his daughter, possibly part of a bigger negligent nature that has been going around in the family for a while. And right of the bat, we have a problem. Namely, the quintessential male superhero (or ordinary guy, makes no difference) is a bad husband and a worse father because he works a lot in order to provide. Do you see a pattern here? Sure, this has been the case ever since ancient times of blind poets and mysterious scribes (negligent fathers = bad fathers), but Train To Busan takes the easy way out and introduces conflict where there shouldn’t be one (instead of introducing fatal flaws in the form of negligence, these fathers should be the heroes of the story because they provide).

Rant aside, Train To Busan is not a very good zombie flick nonetheless. Sure, there are people trapped on a moving train, sure there are also fast-running mindless zombies who want nothing more than fresh flesh, and sure enough – there’s also the trope of biting and getting infected at once; my main point? Just as the film, I don’t have one. In fact, if you happened to see Every Frame A Painting’s Video about telling a story in a captivating way, you would know where Train To Busan’s choke points are. If not, let me break it down for you: event A happens, then event B happens, THEN event C… The problem we have here comes in the form of THEN; events happen without any real precedence or value, and so they quickly lose their agency and thus the audience gets bored. The solution? “Meanwhile, back at the ranch”, and “therefore & but”. By employing these narrative techniques, Train To Busan could possibly get some juice (it’s too late now, isn’t it?).

Bottom line, if you want a film about zombies, Train To Busan fits the bill alright, but there are better choices to be had as well.