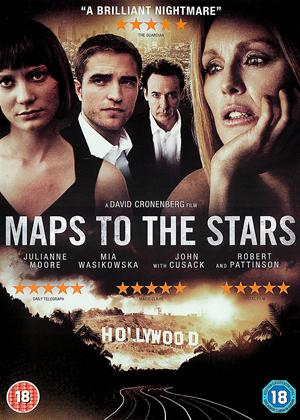 Reviews (4) of Maps to the Stars

On one level, this movie about vain, spoilt, self-obsessed, pill-popping, pretentious Hollywood celebrities reminds me of Woody Allen's Blue Jasmine - especially in the character of Havana, the has-been flaky film star.

Benji is the star, however, as he finds himself a star aged 9 and washed up aged 13 - and his utterly nutty dysfunctional family provided the plot details - which are, it is true, unbelievable, but which does actually work because LA is so nutty that anything is possible.

I dislike films which show 'ghosts' in that tricksy Hollywood movie way, but it just about works here in showing the utterly unhinged loopy-loo family with dad John Cusack and his mad wife, daughter and obviously deeply disturbed and unhappy son.

The sheer cruelty of ambition is laid bare, with Havana skipping around when a part becomes available to her because of a child's death. It is just totally appalling and cringe-making but - and this is the clincher - one can believe it happening. Hollywood ambition really is that brutal; these people really are that blinded by fame and the illusion of stardom that humanity come a very distant second.

I don't usually like David Cronenburg but I did like this - it's my favourite film by him, I think.

4 stars or maybe even more. I wouldn't mind watching it again.

Dysfunctionally Fabulous - Maps to the Stars review by CP Customer

Great film outing giving us a bit of Cronenberg crossed with David Lynch. Had to do a bit of figuring out who was who at the start - which was aided unbeknownst to me by having the audio description on!!! Anyway, having sorted that out, settled into the macabre world of celebrity with a fabulous script - totally full of rubbish most of the time - but a window on a world!!! Unlike the review above, doubt I would watch it again though.

Vile - Maps to the Stars review by MK

I should have known better than to give this director another chance. There is nothing he has made that does not leave the viewer feeling as though he were covered with a thick layer of irremovable grease. This is quite possibly one of the ugliest films of recent times, which would ask of us that we accept it as satire. It is rather the expression of a man returning to his own sick.

Old hat - Maps to the Stars review by HM

A mocking of selfish Hollywood egos turns into a self parody of a film. Aging actress is desperate to get a part in a film about her own mother; or any part for that matter. Squabbling siblings meet again after a tragedy laden family split years before, one of whom is now working for said aging actress. Cue an insiders (Cronenberg) micky take of film people's egos. Probably amused Hollywood actors more than any audience for this 'up its own backside' film. Give it a miss frankly, not particularly entertaining and impossible to like or sympathise with any of the hapless characters

Maps to the Stars review by Michelle Sommerville - Cinema Paradiso

Everyone knows the life of celebrities in Hollywood is far from normal. We definitely see this in the 2014 psychological drama film Maps to the Stars. The film contains death, destruction, and desire, and now you can check it out for yourself.

The film follows a select group of characters that function both separately, and have inter-connected experiences. The Weiss family (father, mother, son) are a Hollywood dynasty. Not only do they look after their own careers, but Stafford Weiss coaches Havana, who is slowly losing her mind as she is haunted by her mother - a former star herself. Son Benjie Weiss is a teen already with one rehab stint under his belt. It is a powder keg, and the spark has been lit by Agatha - the forgotten Weiss child. Recently released from an asylum, she has befriended Jerome, a limo driver and aspiring actor, and has reentered the crazy world of Hollywood.

There are no two ways about it: this film is weird. The characters and the messes they get themselves into is scary, and the worst part is that it was inspired by real-life events. Written by Bruce Wagner, he used events from his time as a celebrity chauffeur, and has brought them to the big screen for everyone to see.

You can’t have a Hollywood film about quasi-currently-successful actors without this specific cast. It’s hard to classify them as big names in Hollywood, but at one point, many of them were. The cast includes Julianne Moore, John Cusack, Mia Wasikowska, and Robert Pattinson - among others. I wouldn’t say I’m exactly a fan of any of them, but they do know their craft, and did well.

The writing was very well-planned and executed in this film. The way the characters all connected to each other (some subtle, others more obvious) was creatively done, and shows how Hollywood is more of a small town than people think.

The sets were also an important aspect to this film. It was interesting to see the contrast between these people that live their lives trapped in their own heads, and yet live in such extravagant and grandiose constructs.

Maps to the Stars has received quite positive critical and audience reviews. For the most part, the work of the cast has been applauded. The main aspect that seems to be dissuading some audience members, is that it is not the general cookie-cutter type film. It is a great choice for those that want to see something original and character-driven, but not for those that want to just sit back and engage in a clear 90-minute story.

This film is not going to be the feel-good film of the year, nor do I think it will gain much major-award attention, but it is an interesting character study.

I give this film three out of five stars, because while it was definitely interesting, it was not my style of film.